Unlike many of you, I did not have an Amiga in the 90s. I was born in 1988, which means I mostly missed the party and was not even 6 when Commodore ran out of business. Still, I was lucky enough to grow with pretty much every Nintendo and Sega consoles from the 8 bit and 16 eras, and a PC with Windows 3.1.

This means I'm somewhat able to appreciate what it meant to have a fully multitasking OS, a blitter and custom coprocessors as early as 1985. Crazy! I've been growing a passion for the Amiga over the last few months, which drove me to buy an A600. The poor thing was in quite a terrible state though, and I spent a few hundred bucks and much time to recap, clean the board, replace the PSU, find a joystick and a gamepad, upgrade the ROM, enhance the machine with a Furia 020, add a SD2IDE, prepare a Workbench install with games, good ol' tracker music, software and stuff. Starting from scratch with absolute zero knowledge about the Amiga, it's been a crazy journey and an emotional rollercoaster so far. I'm having tons of fun browsing through old paper magazines, digging through the Web archives for coverdisks, finding something new to test everyday. Learning the subtle ways of an old, yet very usable OS, is an interesting way to put perspective and question everything you think you know about modern computing.

We actually have several small but active Amiga communities in France, but I thought it wouldn't hurt to expand my views by coming here as well. I've been already enjoying the overall positive attitude on these boards, and many posts from intric8, be it on Twitter or your excellent article about word processors, were fascinating and very useful readings.

Here is a picture of my current setup, the A600 (in all its AZERTY glory!) with a Furia and a SD card stuffed to the brim, displaying on a LCD monitor through an OSSC: 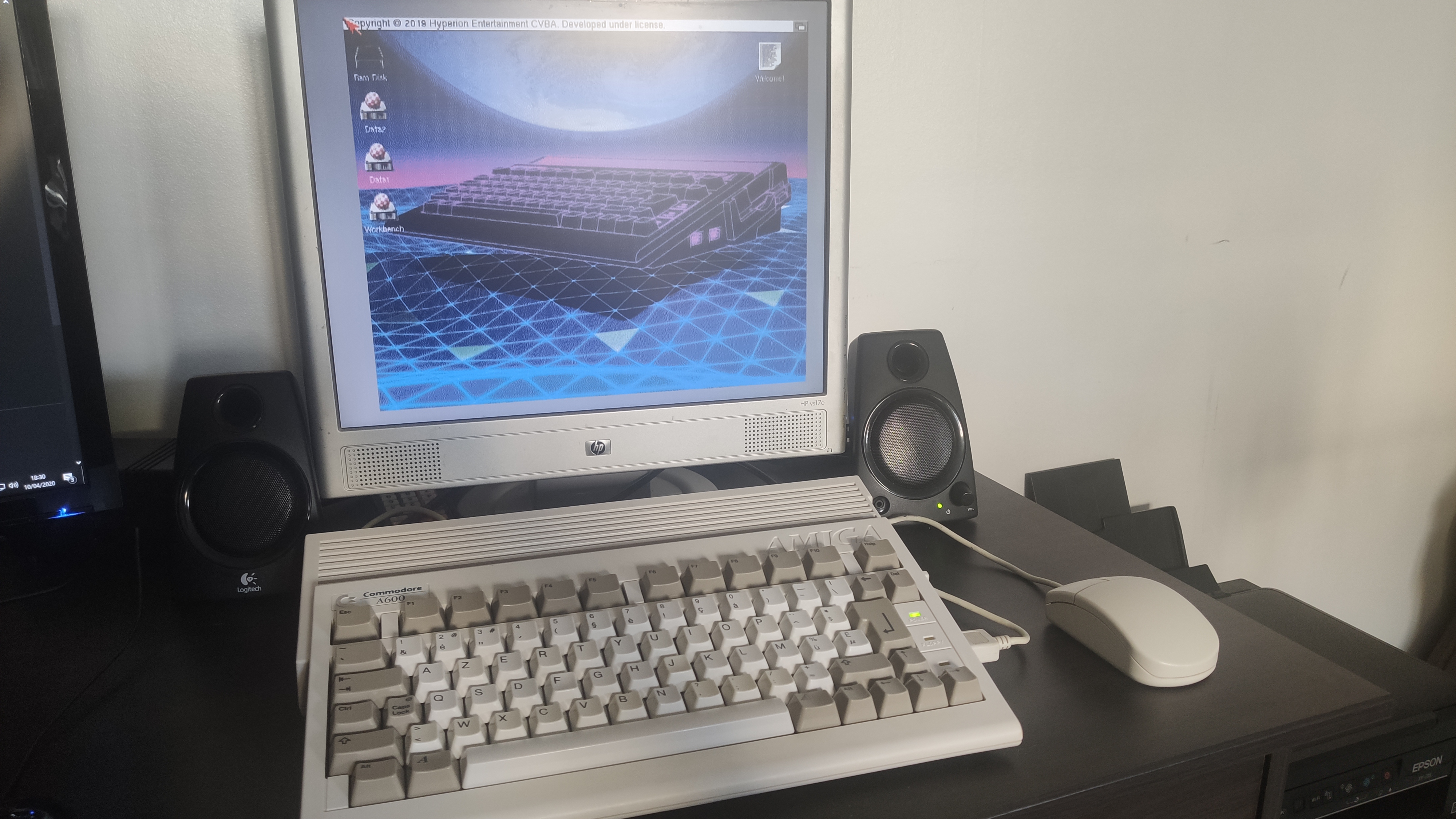 Welcome on board. Looks like an awesome A600 setup.

Welcome! Gorgeous system. What is that monitor you're using? Looks like a perfect fit!

Merci ! Let's keep it in English though...

The screen is an HP VS17e LCD. It's an old model, my wife bought it in 2006 and it's been working fine ever since. The native resolution is 1280x1024, which gives a nice display when using the OSSC with the Amiga. The integrated speakers are quite bad though, which is why I kept external speakers.

It's far from a perfect screen, but it meets my own criteria: lightweight so I can carry it around, not expensive, and comfortable enough to watch. I wish I could still have a CRT monitor, I kinda miss the warmth of these screens. But let's be real, they're bulky, they're not very convenient to move, and they're getting worryingly old. It's getting harder and harder to buy a CRT in a good shape these days (I heard it's not that hard in the US, but I guess even there it depends where we're talking about), and it won't get any better.

welcome aboard & very nice little A600!

An another french guy here, it's cool

Welcome aboard and have good time with your A600. I hope to see more posts of your machine and your system !