my name is Chris I'm 42 years old and live in Hannover which is in northern Germany. I've been an Amiga user from 1988 till 1993 and am just getting back into the Amiga world. I started out in 1986 with a Sinclair ZX Spectrum+, had an Atari 260 ST for a second after that and then progressed to my first Amiga in 1988 which I've bought from a friend who bought bulks of Amiga 500 boards which were from repair centers and were sold through a shop called Voelkner electronic. He used these to scavenge the ram chips which were horribly expensive back then and put these into Atari memory expansions he sold aftwerwards.

So my first Amiga 500 was basically just the board in bubble wrap with a NEC 1037a drive, a tv modulator and no keyboard for the first few weeks. I've later bought a keyboard, mouse and an used A500 case to complete the machine. Later I progressed to an A1000 and after that i went on to the darkside a.k.a. the pc world.

Over the last years i sometimes browsed eBay to look for a nice A1000, but never quite found the right machine until I saw a promising offer this week for an Amiga 1000 with 1081 Monitor and original tank mouse. I wrote a bit back and forth with the seller who could not tell me much about it (not even if it had any internal upgrades installed), but I ended up pulling the trigger on this.

So on friday I received the box and my jaw just dropped when I unpacked a machine in pristine condition (besides slight yellowing) with the warranty seal untouched and the transparent protective stickers under the keyboard still there. Even the wrap on some of the logo stickers was still in place. So long story short I'm back into Amiga and currently just absorbing what has changed over the last 27 years.

Other than that I enjoy jamming on analog Synths and oldskool sample drummachines while currently looking for ways to mildly upgrade my A1000. There's sooo many possibilities.. IDE CF, Kickstart roms, ofcourse memory expansions (I'm on 512k chipmem only which is not fun), accelerators, to retrobright or not to retrobright, maybe even some day the legendary ACA1000 if it comes out. Let's see what the future brings. 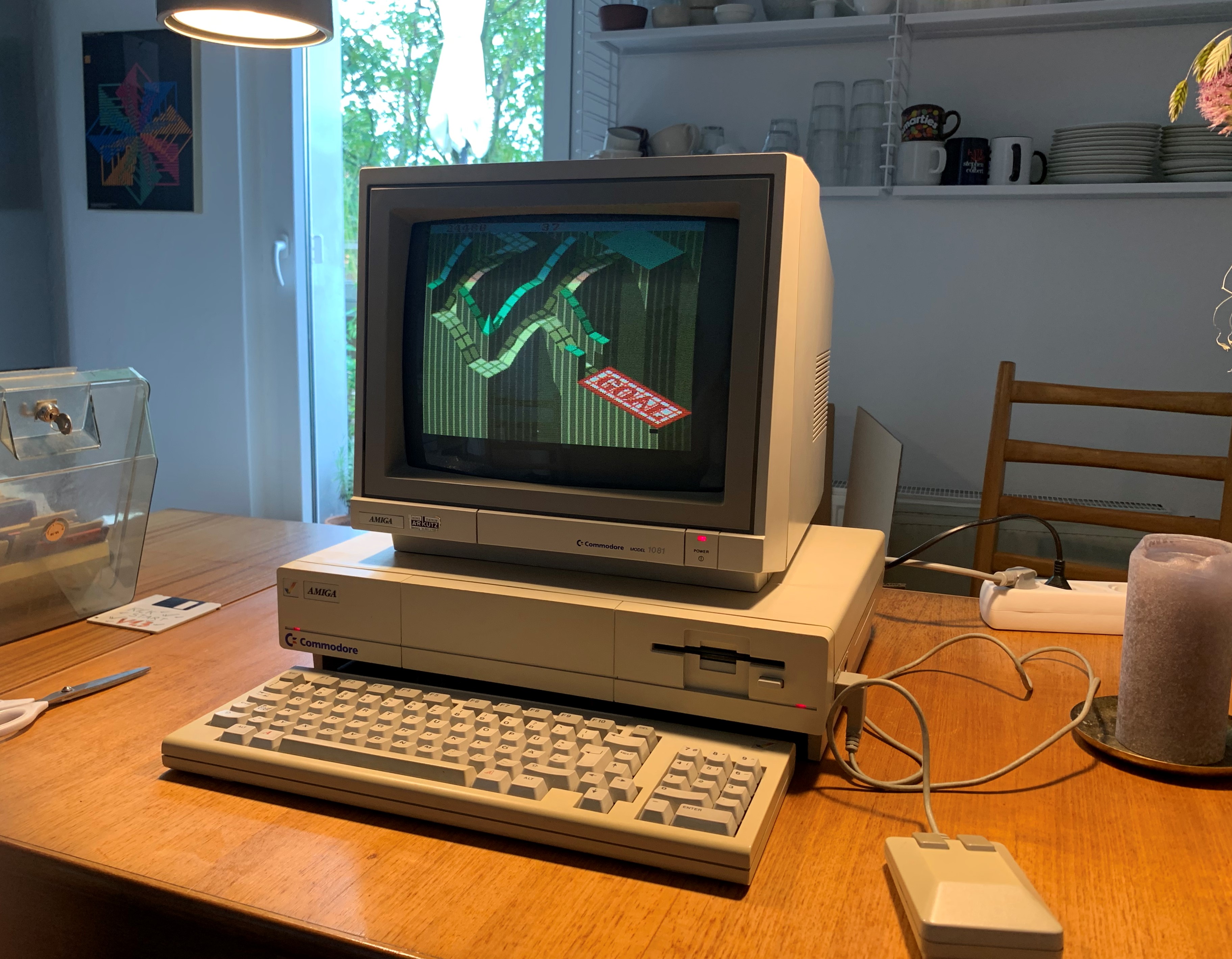 From one newcomer to another, welcome aboard!

I also acquired an A1000 a few weeks ago - I originally had one in the later 80's and wanted to reacquire one. There's so much sentimental value in the A1000, I'm happy to have found one in amazing condition as well.

Keep us posted on your journey to upgrading your 1000!

That is a seriously gorgeous rig you got there - congrats! The Amiga 1000 is a sight to behold, and use. I love it's keyboard big time.

We all have a lot of opinions on how to upgrade an A1K, and we don't all agree. Because, of course, the path you take must be your own and how you think you'll actually use the machine.

Have fun, and do let us know how you decide to proceed!

Thanks for the warm welcoming, guys!

I can't wait to get get deeper into the matter. As a start I've ordered some broken external drives that I'll convert to Goteks to get a bit of software going because I currently only have the disks that came with my machine and it seems that the previous owner lost interest in Amiga software around 1988. Luckily I have Marble Madness..

Next up will be a memory expansion probably with combined IDE interface. Does WHDLoad make any sense with only half a meg of chipram and 8mb fast?

I'm also currently trying to get my hands on one of the EzdineG designed Relocators/Kickstart Switchers.

Edit: Also like probably any A1000 user I'm super excited about the Rejuvenator recreation effort. That's some amazing work you and your fellow developers are doing there, intric8!

Half a meg Chip is challenging. To be honest, I don’t know if it will work for a lot of games.

You could try in WinUAE.

Also, a dedicated startup-sequence might help to remove almost any use of Chipmem.

I don’t know how much of a help FastRAM is in that case so your mileage may vary. But it’s worth a try.

Good point! I guess I'll try to build an optimal Startup-Sequence in WinUAE and get a ram/IDE board if it's successful. Keeping fingers crossed for that rejuvenator revival effort, but I'm not even sure if my A1000 has the WCS piggyback daughterboard.

Here, I have now the same A1000 with a Classic520.
You can find the thread I wrote here (a video with subtitles is on page 2, automatic english translation but you can see what it does ^^).

I like what you did to your A1000! That classic 520 looks really nice. I'm a bit torn right now between an internal or external solution, but slightly tipping towards an internal mkl IDE68k + 8mb which will probably be enough for me. The only downside is that the cf card will not be easily accessible. I'll keep this thread updated or make a new one once I find some time to upgrade my machine.
Post Reply
10 posts • Page 1 of 1