New pickup from the mid 1950's.. Bell and Howell Filmosound

A new project appears on the bench! A wild Bell and and Howell mid or late 1950's 16mm film projector, Model 399AV has appeared, weighing in at like 30lbs or so. 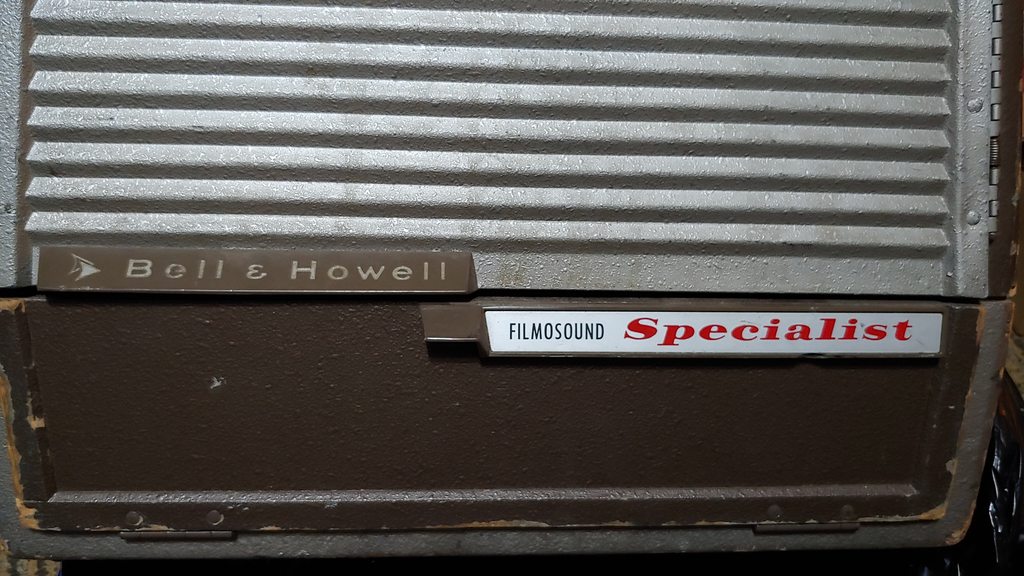 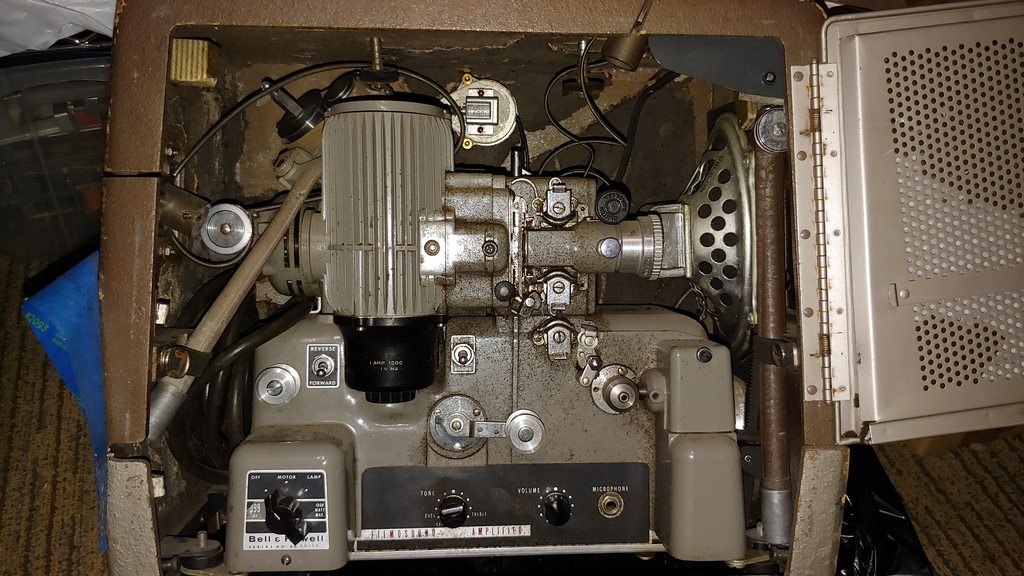 (The 'dirt' is actually old black foam that has disintegrated over time).

Why you ask? When 16mm film is dead dead dead... Well, the 399AV has a tube amp inside it know as the Model 385. The tube amp actually is modular, it just unbolts and comes out.

These make fantastic guitar amps. I need to do a bit of work on it to modernise it (Add an IEC plug, remove the death cap, change any electrolytic caps out, change the negative feedback loop etc, new input/output jacks). The circuit will stay 99% in tact to keep its glorious distinct Filmosound sound.

Until I get it apart I wont know what version of the amp is actually inside it. There are two versions, one is more desireable than the other. Often ones made in Canada had whats know as the EL84 tube version while the USA made ones had whats known as the 6V6 one. EL84 tubes are know as more chimey and more of a British sound (think VOX AC30's), while 6V6 tubes are more a USA rock-n-roll sound (classic Fender Deluxe).

If its an EL84 I'll be ecstatic but the 6V6 is still fantastic.

The 399AV is a more 'deluxe' version of the 385, it has sapphire jewelled movements or something, maybe I'll get lucky and it will have the deluxe version of the amp but I'm not holding my breath.

If any of you suddenly rush out to snag a Filmosound projector, be aware not all models are easy conversions, a lot of them dont have iso transformers, they just run mains wall AC straight to the tubes, so your basically having wall voltage on your guitar strings. death will soon follow.

Interesting, never knew there was a cross over between projectors and guitar amps. Are there parts that are not replaceable? I mean what happens after you do all this work and then one part dies?

its all wired point to point, no pcb etc. In these designs there is nothing unobtanium it just uses old stuff like really old capacitors. the whole amp is just resistors, capacitors and some sockets.

I take that back, the big iron transformers are specific to each amp, so if something catastrophic happens and the isolated transformer dies then yeah, thats a problem but thats rare. getting a substitue is probably impossible unless its identical to something used in another amp like fender which have reproductions.

once you pull the amp out you get this (this was a 6v6 version on sale on reverb, not my pictures) 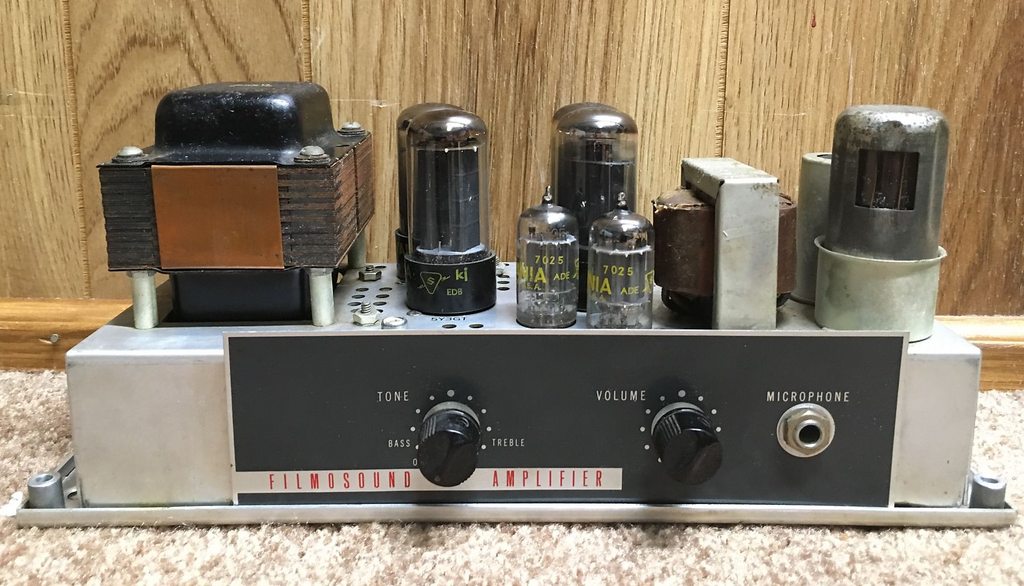 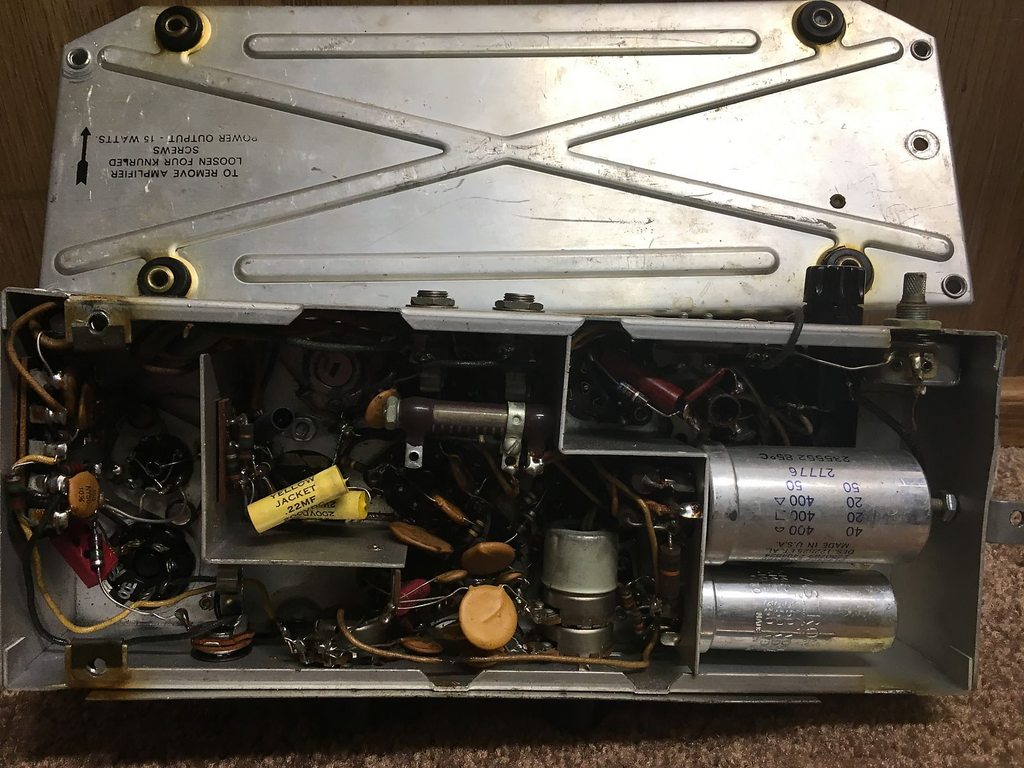 so the two big alu cans will be replaced, a couple of smaller caps.. etc

Hello Cactus.. Im down this road also. I have problems. I have a Filmosound 185 projector and a few feature films. Its fun hobby but a pain. We setup on the front porch and watch movies sometimes. The 185 I think is an earlier but very similar model to yours..
Post Reply
4 posts • Page 1 of 1