(Eric I hope this post is ok here, This was something I had on my blog over several posts, I thought some here might like some 90's retro music kit).

So a bit of retro sound kit I picked up some time ago, was an E-MU Systems E6400 Ultra music sampler (I have some other old E-MU stuff, an ESI-4000 Turbo sampler and a Proteus 2500 ROMpler). Internally these are Coldfire PC's basically. They have a 40mhz MCF5206 Coldfire system-on-chip, some simm slots and a bunch of custom IC's and adc/dac's with a SCSI bus.

In a nut shell, these are chromatic samplers. You would record a sample and tell it that its C4 note or whatever, then when you played midi to it it would pitch shift all the notes to whatever you note were playing. You could also record a sample for every note too. apply effects. all kinds of crazy stuff.

These days doing it on computers is easy, but as a kid I lusted after one of these after learning about it when I was messing with trackers music and had a taste of an ESI-32 from a friend (The ESI-32 was the low end of the Emualtor III series of samplers, I now have an ESI-4000 which is the top end one of that series. These Ultras are Emulator IV series).

Isnt that what our hobby is, old retro gear we dreamed about as kids?

Prices had been on the up and up on these old bits of kit, this is the second tier model. There were basically three, the E5000 Ultra, the E6400 Ultra, and the E4XT.

These were the last hardware samples made by the great E-MU before Creative Technology closed them down.

My goal was to convert it from an E6400 into an E4XT. Who wouldnt want MAX VOICES!

I eventually found this one with the very important DWAM board in the back that gives you an ASCII AT Keyboard interface, double the MIDI channels, Wordclock and AES digital in/outs). You wont find this board separately anymore so finding one already in any non E4XT model is a bonus.

You can see these things basically have a front button panel and they often have failing buttons when you get them, and the rotary encoders are often worn out because they get used like a furious safe cracker has gone at them.

So monotonous to desolder and resolder all new 4 pin buttons and replace the encoder wheel. 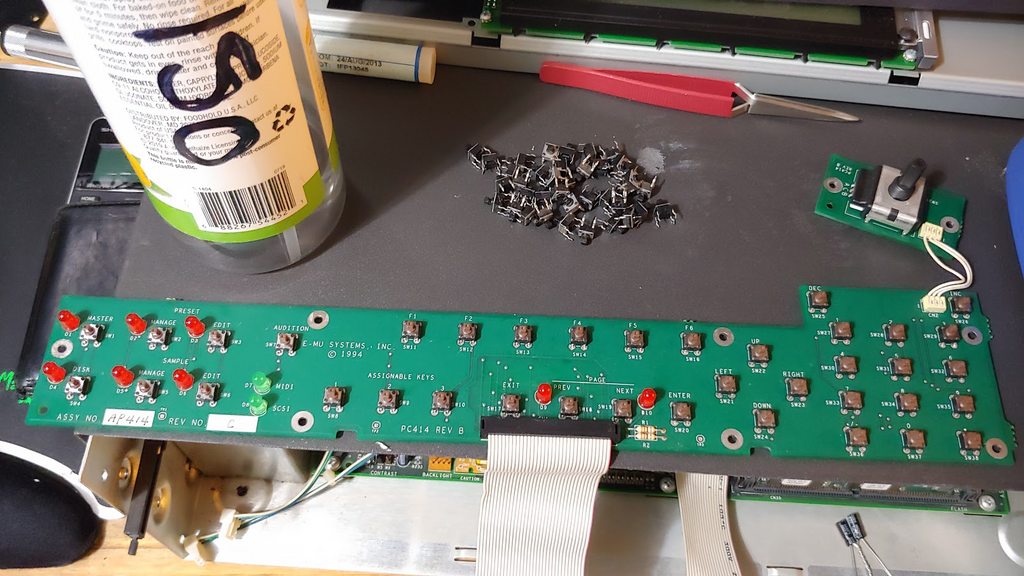 Now all the buttons worked first go, the encoder was buttery smooth. Things were looking up!

The next big upgrade required the sacrifice of a Proteus 2000 ROMpler. I HAD to have the extra voices. HAD TO!

This is the Proteus 2000 motherboard, keen eyes will see between the custom chips on the left and the Coldfire on the right there is an famous EMU8000 chip for effects, exactly as you would find it in Create AWE32/AWE64 sound cards. You can also find them on Amiga's with the Blue Ribbon Soundworks 'One Stop Music Shop' sound card (its a zorro card with a emu/creative waveblaster card on it. I have one in my EMU SoundEngine external midi module) 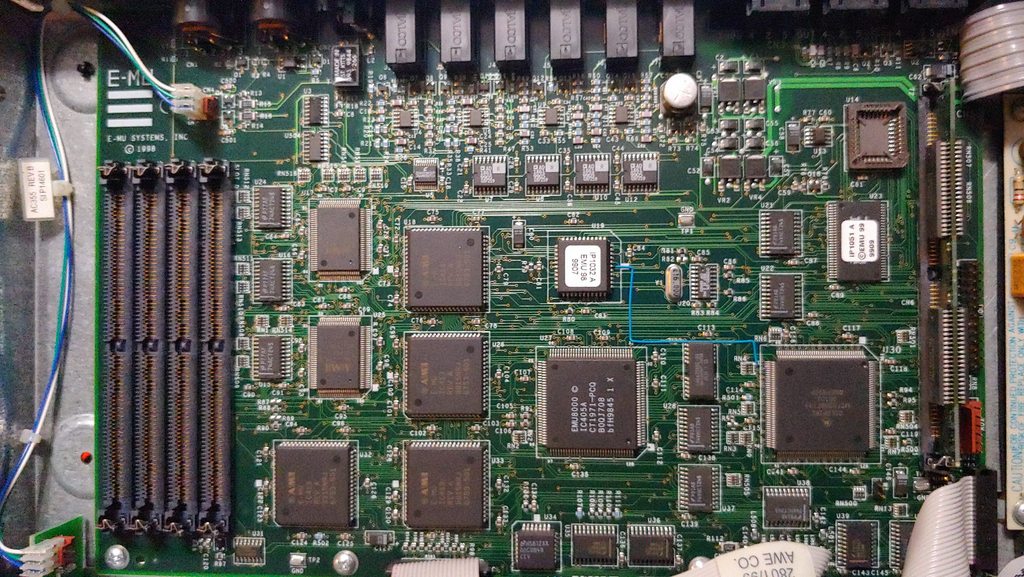 I had to desolder the chips from the P2K to get those extra 64 voices I needed. 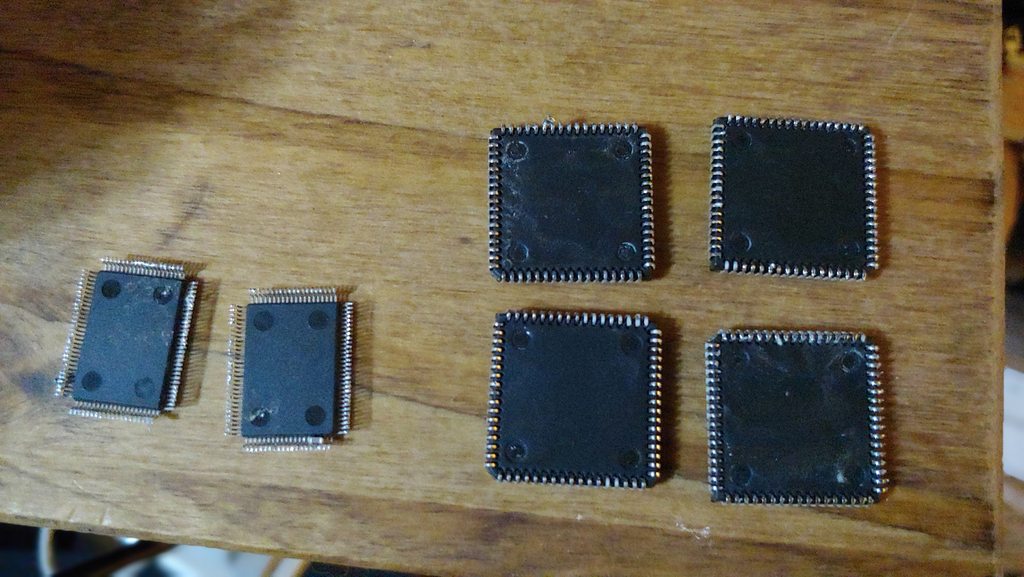 I only needed 3 chips for the upgrade, its not the easiest process but we got there in the end! 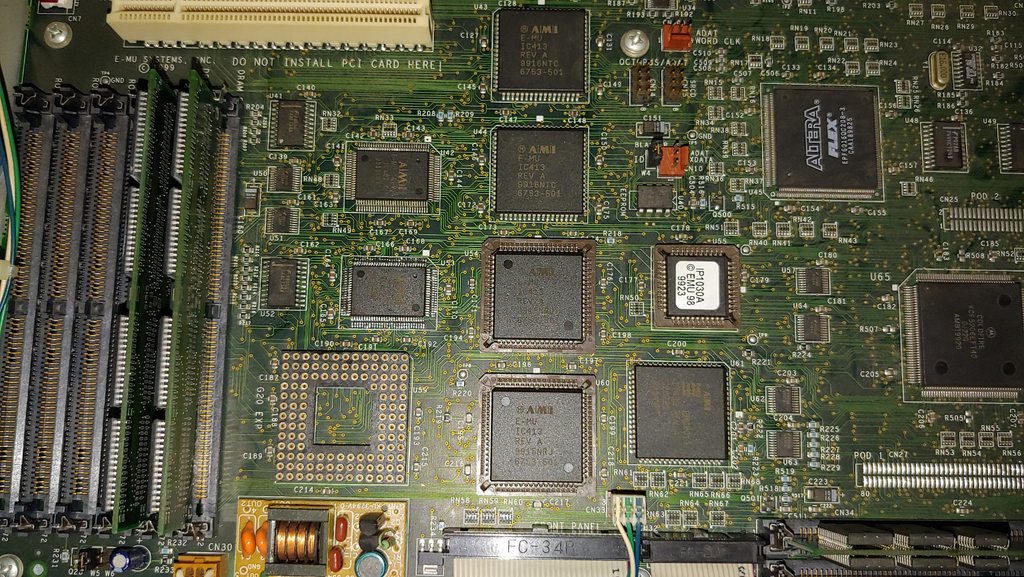 So this process happened over the last few months, but its now upgraded to a full 128 voice and is an E4XT. I still need to do a screen replacement, mine is a bit faded. These old screens use something stupid like 500v AC with no current to drive the fluorescent backlight panel (and sometimes you will get a dc to ac converter that hums)... so the goal is to replace it with a new modern one that uses 3v DC to drive the LED light. So much nicer! it just needs 3.0v, not common 3.3 or 5v... ugh. I have a pcb I made for it so... thats coming later.

One of the oddball side effects of picking up some old samplers is putting SCSI2SD into them and replacing the storage mechanisms. My ESI-4000, swapped its SCSI Zip100 drive for a SCSI2SD, and the Ultra I swapped its SCSI Jaz 1gb. Its tempting to mess with them in an Amiga capacity. I dont have any Jaz cartridges tho and only a few zip disks.. I dont know if the SCSI Zip100 was as prone to click of death as other models or not...

Great post - bookmarked for future reference. I have an e64 that's been in storage for 15 years. I maxed out the internal hard drive on mine and was using an external scsi jaz drive for storage, but I would love to put an internal flash drive in it and start using it again, probably replace the noisy fan at the same time. If you ever do a how-to for replacing the internal storage on these I would be very interested.
Post Reply
2 posts • Page 1 of 1