Upon my arrival home from a long family campout at Fort Worden (an epic spot), I was greeted with some large boxes on my doorstep. They contained some Amiga objects pulled from an estate sale in Wisconsin, after the original owner had passed away. I'll speak more about what's in those boxes at a later date.

But as is my way, my attention first went to the disks. I knew I was getting a small loose stack, half of which were originals. But to be honest, I'm often much more interested (and surprised) by what I find on the disks with hand-written labels.

This stack did not disappoint.

On one disk there was a label of "Raytraced Objects". Curious, I popped it in. I was excited to see the program "View ILBM" was included. This always means there's some potentially cool images to be found. And before I dove into the Raytraced images, I saw that there were two image files in the root, sort of thrown in there.

One was titled "Legends".
Here it is:

This image was used on a TSR Dragonlance-branded calendar in 1987.

Original image of the calendar cover design from 1987.

My guess is someone scanned that calendar and cropped off the borders and logo. I've found an image of the calendar, and you can see parts of the painting are indeed missing especially along the bottom.

Apparently this image was also reused for a jigsaw puzzle that same year (of course!) but oddly no AD&D module or game art that I can tell.

When I first discovered this image on the floppy disk I had no idea where it came from. I then pinged my brother, who has been into D&D longer than anyone I've ever known. He's still an active DM, if that helps, and is two years older than I am. Back in the 1980s I'd spend all of my money on video games. My brother spent all of his on D&D related books, lead figurines and gaming supplies.

In any case, within two minutes he had the answer. I asked him how he figured it out so fast.

i have the power of google. i thought it was a video game cover, but didn’t find it. then realized it must be Raistlin, then the kender, and the calendar popped up as i narrowed the search.

I then followed his lead and discovered that in Hungary of all places the image had been used as cover art for a novel.

if it was in a calendar it was sure to have been used in other places prior to that — a novel cover or a module cover, or even a dragon magazine cover. they reused images for sure.

Pretty crazy! What a trip to find this on a disk. The ray-traced images in today's terms were very crude. But this right here is a gem to preserve, and admire.

Awesome. I too like rummaging through old disks. It is a nostalgia rush for sure. Especially when in those days you went to a friends and copied a bunch of misc disks that had graphics and sounds on them. It was always fun to discover what was on the disks.

Looking forward to seeing what you find next.

I contacted the artist, Clyde Caldwell, directly about this painting. I wanted to get the official identification of those characters from the man who painted them. There's a bit of debate about the female characters.

I told him how I found the image and how it led me to his website (where I bought some of his still-shrinkwrapped and signed calendars!).

I suggested the characters might be:
Raistlin, Caramon, Crysania, and Tasselhoff.

There was debate around the woman in particular, as some thought it might also be Goldmoon or Riverwind.

I didn't get a computer until a little later on, so am not familiar with the Amiga. Glad you were able to stumble across my website by way of the old floppy disks. Thanks for sharing the story.

The painting is called 'Legends' and was done for the cover of the 1987 Dragonlance Calendar. The calendar is a rare one, since the initial print run sold out quickly and was never reprinted. I didn't know it was produced as a jigsaw puzzle.

You have all of the characters identified correctly. The female character in the painting is Crysania. I think I was the first artist to paint her.

I don't really remember the story behind the image. All of the featured characters played a part in the DL "Legends" trilogy, though the calendar paintings were probably done before the books were even written, so most likely I only had notes from the authors as to the subject matter for the paintings in the calendar.

I decided to do a montage of the characters, since Larry Elmore had done the previous DL calendar cover, and I was following the lead he had set with that one. I even did a similar border design (though changed it up enough to make it my own.) You can see the full painting on my website here.

How freaking cool is that?

The circle is now complete. I found the original calendar!

One of my favorite pictures to look at on the Amiga...

Very cool. I have a bunch from when I was a kid (not a collector) so they are all X off days etc.

I find the 1994 ROBH cover to be very.. undragonlance art like.
This was back in Australia, ones so I dont know if they differed... 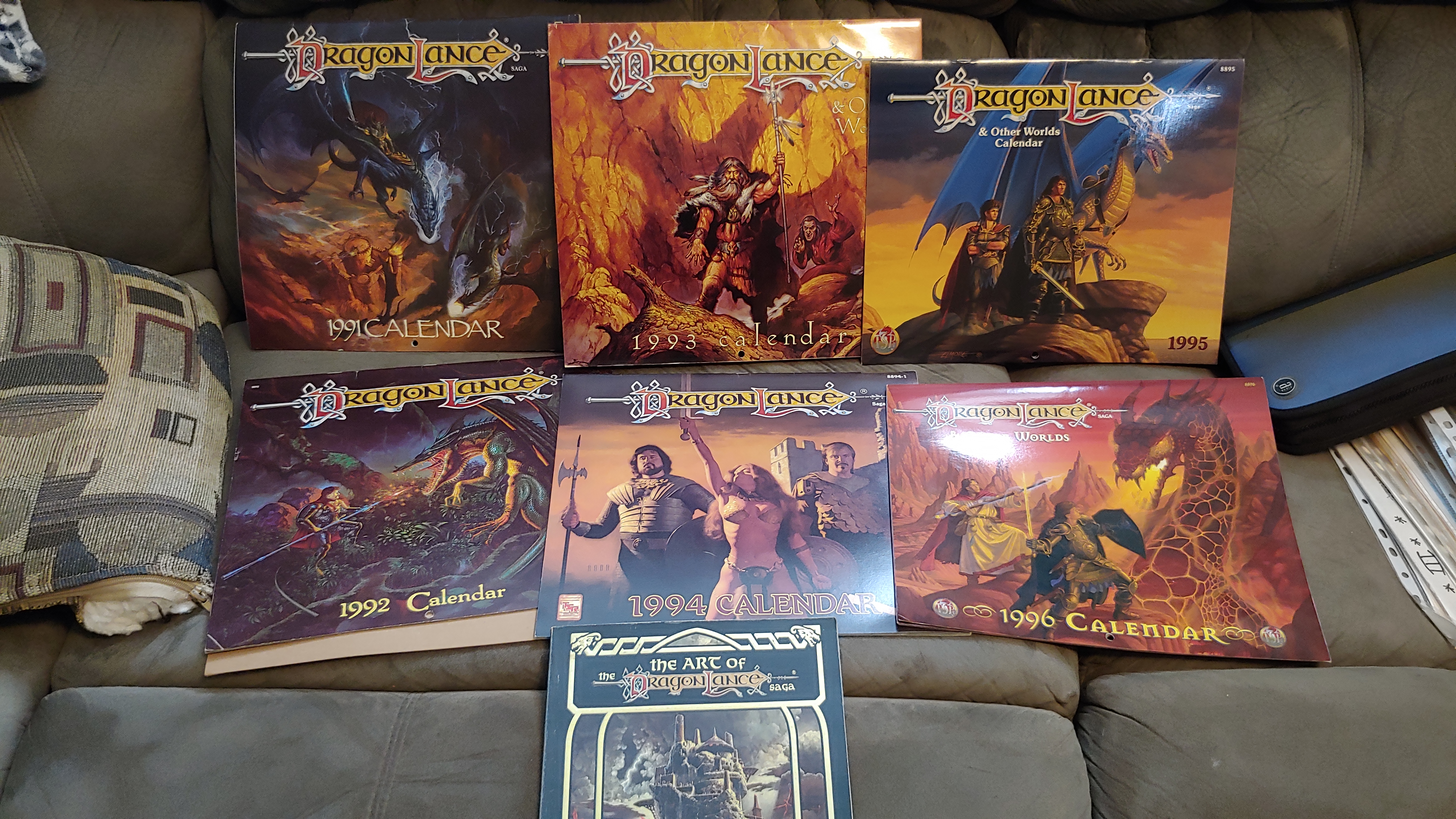 Looks like the budget might have been a bit tight for that one, they couldn't even afford clothes for that poor girl!
Post Reply
7 posts • Page 1 of 1