Show us your Workbench!

I remember my first computer was a Vic20 - It was OK, but the low resolution coupled with a ridiculously small amount of ram and slow Datasette made it frustrating and I never really 'bonded' with it, it wasn't until I got my C64 that my love for computing really took off. As a result my C64 will always be my retro machine of choice and my favorite, I just love the C64.

When I got my first Amiga, the Amiga 500, it was amazing! The things this machine was capable of just blew my mind! However I always found that something was missing in comparison to my C64 - I had to load software off floppy, whether it be productivity software, communications software, games or the operating system (Workbench) - I hated having to boot the OS off a floppy and just wanted a hard drive that I could install my OS on in the hope that I could just drag most of my games to the HDD and be done with floppies altogether - Something that would have been difficult in the day considering the way most floppy based games worked.

The C64 had the operating system (Basic - extended DOS via an Action Replay) in ROM and I by far prefered such a configuration in comparison to the Amiga, the way I had to insert and load disks for everything i wanted to do on the machine made the Amiga feel more like a console than a real computing device, but HDD's were expensive for the A500 and I always swore that one day I'd have the $$ to get a real storage medium, complete with bootable Workbench, for my Amiga.

Fast forward to modern times and mass storage on the Amiga has progressed in major leaps and bounds while WHDload allows users to store virtually any game on HDD with none of the fragmentation/compatibility issues that the Amiga was renowned for in the day - The exact setup I always wanted! As a result I want to 'see' everyone's AmigaOS Workbench, I want to see what customizations you've made, what software you have installed and how you have it laid out. Hence, I present the 'Show us your Workbench thread'!

Below is a screenshot of my own Workbench. It's on my Amiga 1200 with an ACA1232 @ 40Mhz, Indivision AGA Mk2CR and 8GB CF HDD. It's running AmigaOS 3.1 with Scalos desktop. I've installed Tiny Meter to show CPU and memory usage with a separate partition for games and demo's. All games are installed via WHDload and easily accessible via the iGame front end - So far I haven't had a single game/demo that wouldn't run.

Show us your Workbench people, I'd love to see this thread grow! 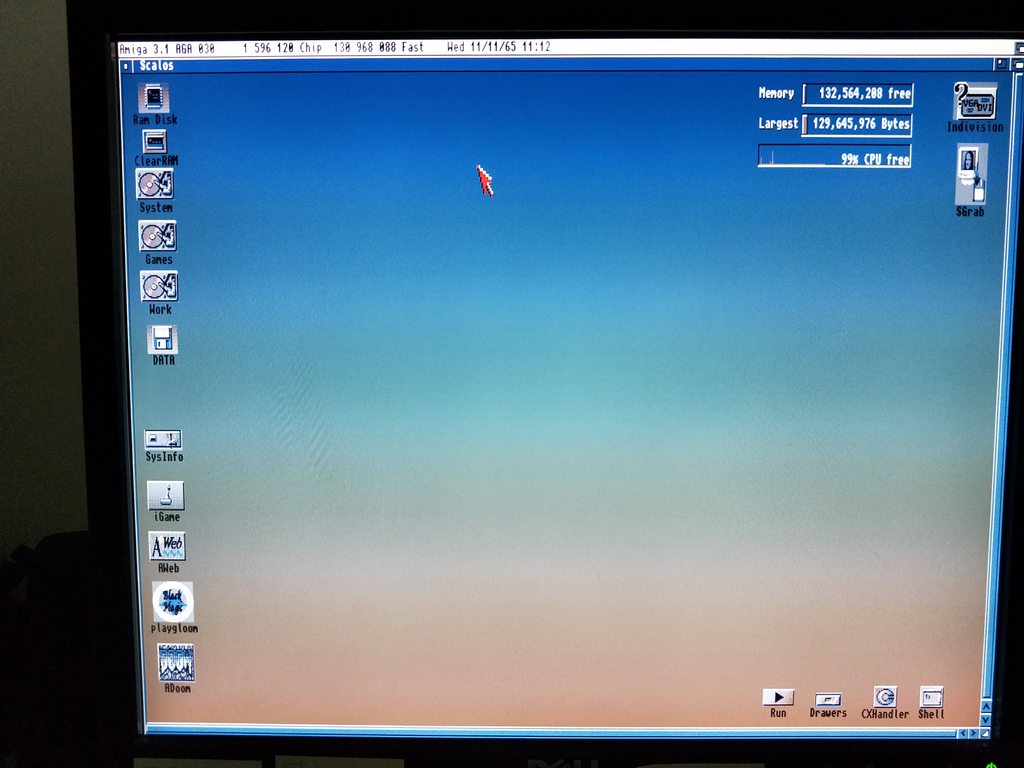 My Amiga 500 running Workbench 1.3 (happily and forever). 512k on board chip RAM with 512k trapdoor slow ram modified to be chip for a total of 1mb chip RAM. GVP SCSI hard drive of about 4.3 gb with an additional 8mb of fast RAM. 8600 standard processor. My Workbench has been modified to increase the color pallet from 4 to 8 colors, and set to the standard Magic WB look. Icons have all been heavily sought out and hand picked by myself in order to get ones that look right running in medium resolution NTSC mode. They are shown here in medium resolution PAL mode just to show more programs, but I normally run it in NTSC mode. 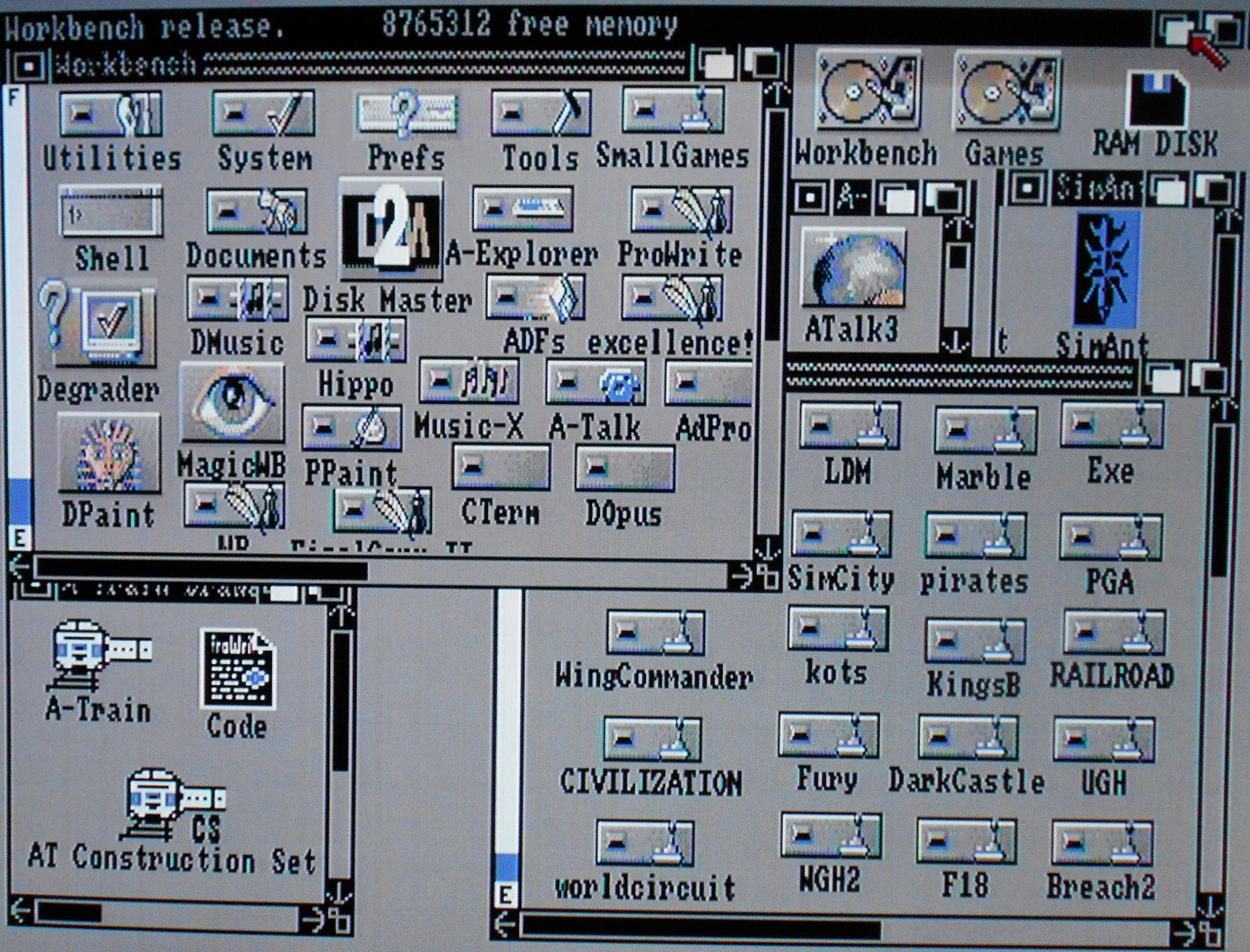 I guess I'll be submitting the least visually changed Workbench. Mine is a classic blue WB 1.3, too. I am sporting Supra HDD icons, though, and an iconified DOpus strip that loads on boot-up along the top of the screen. It displays the date, time & CPU/chip/fast RAM usage. Right-clicking on it launches DOpus. I don't run the iconified version on my 1000's as it eats up too much of their precious RAM. The 2000 has plenty to spare. I also use a customized Pointer (and I paint it into each of my Workbench disk's Icon Editor so it's on most of my machines).

Since we're listing the machine in the screenshot's capabilities: I purposefully haven't changed my Workbench colors or, well, anything really. I do think I'm in the market soon for some fun HDD icons. I love the Supra icons, but I could use a few other options I think. I was thinking of doing the pixel art myself, and making an A2000-looking icon for each drive or something Flash-themed for the Flash/Ming drives.

Mine Is pretty much a boring 4 color 640x480 WB2.05 desktop with my 4 most used items 'left out' on the right hand side, the 4 colors is more an artifact of using multisync than anything else but once I pick up an indivision ECS I'll probably try to go at least 8 color 800x600 but that may be a while as the 4 color desktop is more than adequate for my needs right now (dev machine for Manx C and Assembly)

Any reason why no one runs AmigaOS 3.1 on their OCS/ECS machines?

I still reckon 'bang for buck' the A500 with a few expansions is a ripper machine. 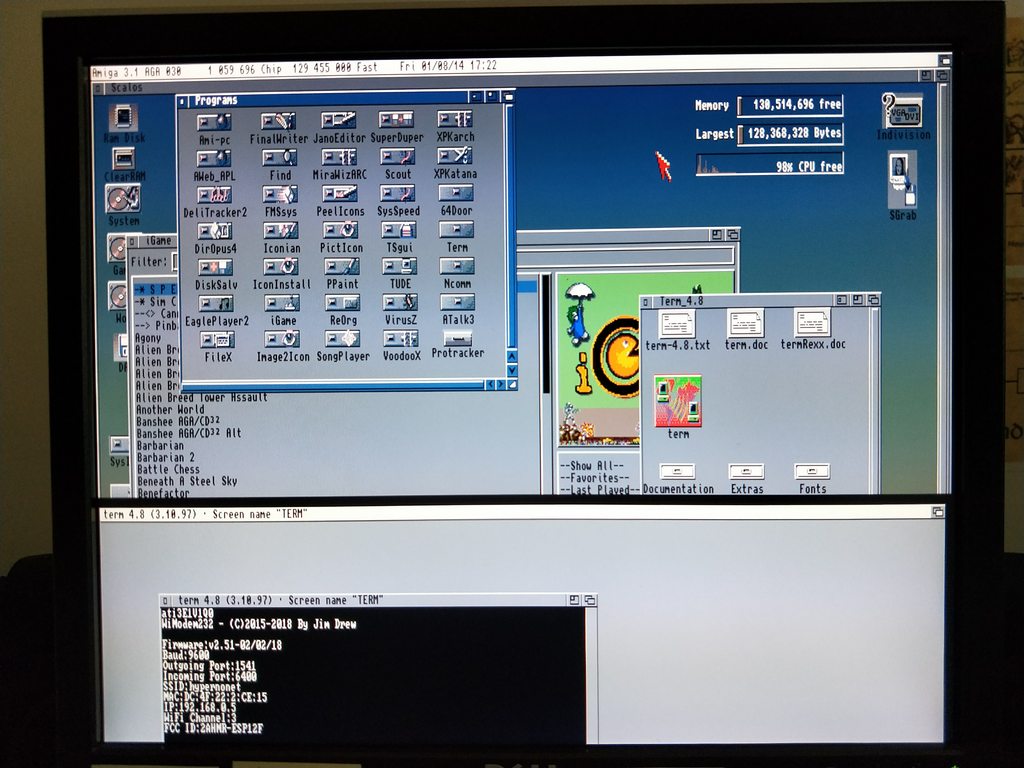 I love this A1200, it's so clean and unmodified - I refuse to fit Gotek's in place of my floppy drives, doing so is sacrilege IMO. Additions such as accelerators and scan doublers are fine, provided they still use the Amiga's standard chipset and don't replace it in FPGA.

Any reason why no one runs AmigaOS 3.1 on their OCS/ECS machines?

Totally. It has nothing to do with speed for me. You can turn any Amiga into a crazy speed demon if you have the will and desire. For me 1.3 = near-perfect compatibility (minus PAL/NTSC issues) and hits 100% on the nostalgia richter scale. No games that really mattered that I'm aware of required 2.0 nor 3+ that couldn't run on 1.3.

3.1 allowed for a really nice UX when it came to modifying your Amiga, but utilities like HDInstTool made it iffy at best in terms of gains vs losses beyond monitor stuff. But if you want an original game to work, 99 times out of 100 you're best off if you're running 1.3 to test it out. It reduces a ton of variables right out of the gate. Once I decided I wanted to be a content creator and show things "as they were" BITD, I dropped out of 3.1 after a while. It was fun when it worked, but man it was aggravating too often than naught.

That's been my experience at least.

I know there are software solutions now that make most arguments obsolete. But for me, I like to 1) buy the game, 2) put it in the floppy drive and 3) see what it can do like it's 1990 all over again. When I was in 3.1-Land it was so frustrating to see how many games crapped out and really required 1.3 to even load. WHDLoad fixes a lot of these issues today, but I'm still living in olden times for now. And dang - a blue desktop? I love that. It's easy on my eyes.

What's doubly perfect about the 1702 is it can have 2 machines hooked into it a the same time. So I can hook the C64 into the back, and my SNES into the front. And both offer arcade quality pixles. The 1702 is so good, it used to be used in most video shops and even by directors as a color matching monitor to ensure what they saw through the camera was "right" based on what they saw on the 1702's screen. It was literally used as a color calibration tool for their gear. It's a tank, and I hope mine keeps chugging for many years to come. It's lasted this long (fingers crossed!).

Since you asked; I find an incredible amount of enjoyment bringing the most out of Workbench 1.3, being a power user with that operating system when every other power user is strictly running 3.1 and even power PC stuff. Too many people recommending systems that are quickly dwindling in numbers, and they recommend them to people who have absolutely no use for them. I've certainly played with 3.1 in my emulation days. It was fun doing things I never would have dreamed of on a real Amiga... But when I got back into the real Amiga, I really just wanted things to be mostly authentic to what I remembered. I don't mind a bit more memory or a hard drive, but when I see accelerators running it doesn't feel right for me.

I like being around to show people that they can get almost anything 3.1 can give you from 1.3 - That almost all commercial software was either designed for it or at least supported it, and as long as you cruise the Fred Fish archives there's more than enough freeware/shareware for all your power user needs. I'd like to save the 1200's and 4000's for the people who can actually use them to their potential. I could do that, but I'm probably the only one doing certain things with 1.3, and there's no shortage of people doing those things on newer Amiga's... meanwhile regardless of impressions one might get from forums or certain YouTubers, the vast majority of Amiga users are still running 1.3 I believe, so I do my thing for them.
Post Reply
61 posts