New brag sticker for the A1000 Phoenix

My Phoenix board that I acquired last year came with the original machine's front plastic cover - the Australian variety which has the additional "Commodore" logo at the bottom left.

As you can see in the image, my Phoenix sticker is in really rough shape. It is highly discolored, and the top is torn. It looks like it was cut out of its original paper backing with some blunt steak knives.

As such, I decided to create brand new Phoenix brag stickers. I also have a spare virtually mint front cover, which I plan to use on the Phoenix machine which has quickly become my #2 machine (and is trying hard to become #1). The front plate I have ready to go - without the Commodore logo - looks like this:

Since I've made my Phoenix NTSC, I'd prefer an NTSC case and cover plate. Buh-bye, C= logo. I'll hang onto it, of course, but keep the front nice and clean like my other machines.

My original idea was to "stick" with history: simply scan the original logo (did you know there were a zillion different Phoenix logos?). After I did that, I brought it into Adobe Illustrator and traced it. This actually took some time to do. I rebuilt the logotype as well, and got the color very close to the original blue Andrew Wilson chose back in the day. My new vector version of the logo now looks like this:

On the machine, it should look something like this:

Looking pretty good. I intentionally removed the separation from the wings and body, as seen in the original, which is more inline with the other versions of the logo.

Finally, there is the matter of making the stickers. There are really two options.
Option #1 is to do it like the old sticker - on a clear backing. Over time, this could turn color again but we're talking about decades of course.

Option #2 would be for it to be a "transfer sticker" where only the blue comes off, and there is no rectangular backing. I'm not sure how that'll turn out, but I'm rather curious as I think it would look great.

What do you guys think?

After I get some made, I'll probably keep 2 and try to give the rest away (something like $3 shipped anywhere around the world, which basically covers my costs).

Admittedly i have been thinking about this. Bottom line - I don't like it. It distracts from the simplicity of the design.
I even don't like the Australian / European design with the Commodore and the C= .
Too 'busy' for a lack of a better word.

I tend to agree with the visually busy part. I definitely prefer the N. American lack of "Commodore" on the front, too. Looks just gorgeous with the simple Amiga logo and the checkmark.

I guess where I got stumped was the pre-exisiting Phoenix sticker. Mine really looks bad. But I'm not the type to peel it off. A lot of companies had little brag stickers back then: AdSpeed & Supra to name a couple. I wonder if GVP did that, too?

Anyway, maybe just the Phoenix bird would be cool, too?

Anyway, my original thought was to replace what I had just to keep with history. On a side note, looks like a couple of a1k.org guys are raising their hands for replacements. I'm only going to do one... I suppose I could make the full thing and clip off the text if I wanted to.

'Feels' better to me.
Can't say why

This is only my opinion, but these sorts of extra badges on cases don't look good. The case was never designed for these badges -- it was designed for the 1 badge, which is why there is a recessed place for it. Everything else looks meh. 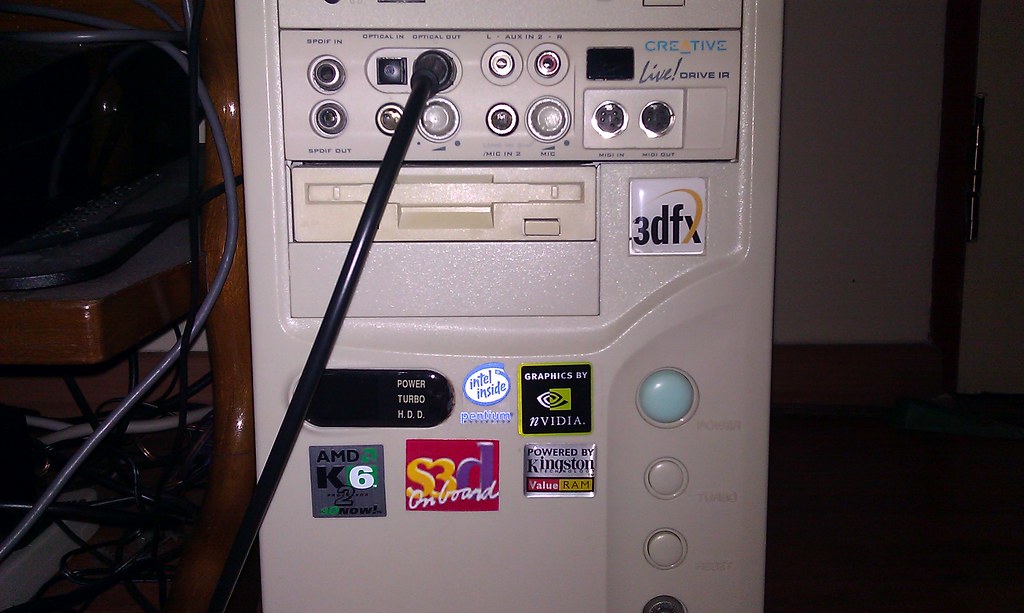 @mattsoft is that photo of an actual machine of yours? That's horrific! Hahaha!

I'm with a couple others in that I don't really understand why anyone would make ugly a beautiful Amiga by adding junk like stickers onto it. I think it's really the kind of person you are, though. You've got the type that thinks that stuff is beyond disgusting, then you've got people who put all kinds of customizable stuff onto their cars and wonder why nobody wants to buy it even though they've "put 10 grand into it!" lol.

The individual may love putting that kind of stuff on "their" machine, but nobody would want to buy that from them. But since I doubt anyone here is looking to become rich buying and selling, it's probably going to stay with them until the end, so whatever makes them happy. It's also a thing about the board itself... Should somebody want a Phoenix board, I guess they would also want to make those that might care aware of what's on the inside... As in I imagine anybody that wants the board would also like the sticker, and I wouldn't want the board...

What's really confusing are the people who put stickers on their stuff when they don't even have the product. lol

Also - I have that exact same Creative mixer/input. Mine is black and is external, but I still use it to this day to record from a real microphone, it's a great little mixer with lots of inputs as well to hook up to the computer.

It's true. The whole sticker thing really can get out of control. Just go to a Staples or Office Depot/Max and look at the laptops on sale. How many little sticker badges need to be on a keyboard anyway? That's one thing Apple never has done, and never will. Dell? Well if there's space!

My father-in-law is one of these guys who will even leave the clear/white sticker on his monitors... you know, the long ones slapped onto bezels that say things like "HMDI, 16:9, etc." It's bizarre. I think deep down he's afraid if he peels it off he won't be able to return the thing... even if it's 3 years old! Hah!

I'm not thrilled about the stickers to be sure. But I've got one already (only machine I have like that) and it looks like total crap. Originally I was going to just try to make that better. Maybe I should just put my N. American face plate and call it a day. Hm...

These stickers were more of a "thing" in the early 90s from what I can tell. I've only seen it done for 3 or 4 brands.

It's all personal opinion of course, but I did generally like the large Video Toaster stickers for hte A2000.

intric8 wrote:@mattsoft is that photo of an actual machine of yours? That's horrific! Hahaha!

Yeah, after I removed MOST of the stickers.