There is no RTC or battery on this guy, so I picked up one from AmigaKit.

Quite a big speed jump from my Apollo 1230 Turbo LC!

This may be peak A1200, at least in my book without Vampires, PiStorms, or other stuff.

Nice new bit of kit. I noticed there is no FPU. Is there space on the board to add one, or do you simply need to replace the processor?

So what do you have planned for this little baby?

So is it really only running at 52.5 MHz? Or maybe it's just faster RAM.

Chip RAM is noticeably slower, though.

So is it really only running at 52.5 MHz? Or maybe it's just faster RAM.


For full disclosure, I am running more like 62 Mhz. The TF boards have software control over the CPU clock, which is pretty cool. Apparently WhichAmiga is not really able to correctly calculate the CPU frequency. This rev 4 LC060 is running fine at this speed. If I run it at the default, which should be the same 50Mhz as your board, I am getting similar 36900-ish Dhrystones. WhichAmiha is saying 43Mhz when running that that speed.

The board can take any 060 variant. The LC and EC variants do not have FPU. EC doesn't have MMU. The full hotness would be the Rev 6 68060. Maybe I'll get one of those at some point.


iljitsch wrote:Not sure though how much Amiga software really uses an FPU. Probably ray tracing software?

There are some cool demos that need the full 060 with FPU. Also if you want to run anything compiled specifically for 060 as compilers tend to assume FPU. But for just doing "normal" Amiga things, the EC is more than enough.

After showing these pics around, Károly Balogh said to me:

It isn't the peak (yet), but it's very close. The peak is at the Warp1260 probably, thanks to its RTG support, and stable 105Mhz operation. At least if you want to keep things in the original case.

Then again I'm not entirely sure what one would do with such a machine. I think it's "I wonder if we can" territory more than, "I sure need it to do this."

Very fun, cool stuff all around!

I was looking at the Warp, but for me it is a step too far with RTG, wifi, ARM co-processor and other stuff. At that point, it is not really an Amiga. At least to me. Just run EMU or Mister or something else. I feel the same way about PiStrom and Vampire.

Originally I was looking for a Blizzard or one of the other classic 040/060 boards, but they are too rare and expensive.

The TF board is is a more pure modern version of those classic boards, so that was the one for me. I do think that Warp1260 is pretty cool. It is so great to see not only cool new software but cool new hardware for these machines. The Amiga scene is so good now.

Testing out some heatsink action.


iljitsch wrote:Not sure though how much Amiga software really uses an FPU. Probably ray tracing software?

SPiFF wrote: ↑
Fri Jul 30, 2021 11:05 am
There are some cool demos that need the full 060 with FPU. Also if you want to run anything compiled specifically for 060 as compilers tend to assume FPU. But for just doing "normal" Amiga things, the EC is more than enough.

Right. Obviously when waiting for something really slow (installed SSH and it needed to generate a DSA keypair, that would probably have taken all day on a 68000) more speed is always better, but I think the 68060 nicely holds the middleground between being usable even for more challenging tasks and still be within the realm of Amiga-ness as you still have to wait a bit for some stuff.

SPiFF wrote: ↑
Fri Jul 30, 2021 1:05 pm
I was looking at the Warp, but for me it is a step too far with RTG, wifi, ARM co-processor and other stuff. At that point, it is not really an Amiga. At least to me. Just run EMU or Mister or something else. I feel the same way about PiStrom and Vampire.

Yeah especially the PiStorm where you actually run an emulator on a completely separate OS... At that point it's no longer an Amiga 500, even though the whole thing fits in the original case and you have most of the original hardware still sitting there.

Then on the other hand I'm sure some people will feel the same way about this picture of me using my A1200 that I posted the other day:

The difference here is that it's all I/O that's been added. And the Amiga does run the USB stack software. I think for a late and expandable model like the A1200 this is not unreasonable, and I do actually think an FPGA-based recreation of the Amiga with more modern I/O would be the way to preserve the legacy as older Amigas fall by the wayside and the I/O situation becomes harder and harder to manage. (See this post on my blog about that.)

However... sitting on the next desk is that Amiga 1200, and if I boot holding "2" then the 68060 card is disabled (yikes, just 2 MB chip mem, way too authentic!) and I can of course use the regular video out rather than the Individsion AGA MK3 HDMI, unplug the PCMCIA network card and use a normal Amiga mouse. Then the only non-stock part is the CF card that I use as an HDD. And even that is in theory not entirely period inaccurate, as CF cards were introduced in 1994.

I do think things are different for the older machines, though. If I had an Amiga 1000, I wouldn't dream of adding a bunch of upgrades. Probably a newer mouse and an external Gotek drive to keep my sanity, but that's it. And of course run WB 1.x.

A big part of the difference is probably that I upgraded that 1200 (and my 3000) over a good number of years when those were my daily drivers, so to me those upgrades don't seem unnatural.

Looking around, the TF1260 seems to have good memory speed just the FW is currently not taking full advantage. There is also some timing with the Chip RAM that could be improved. Sounds like this area could improve a lot in due time. 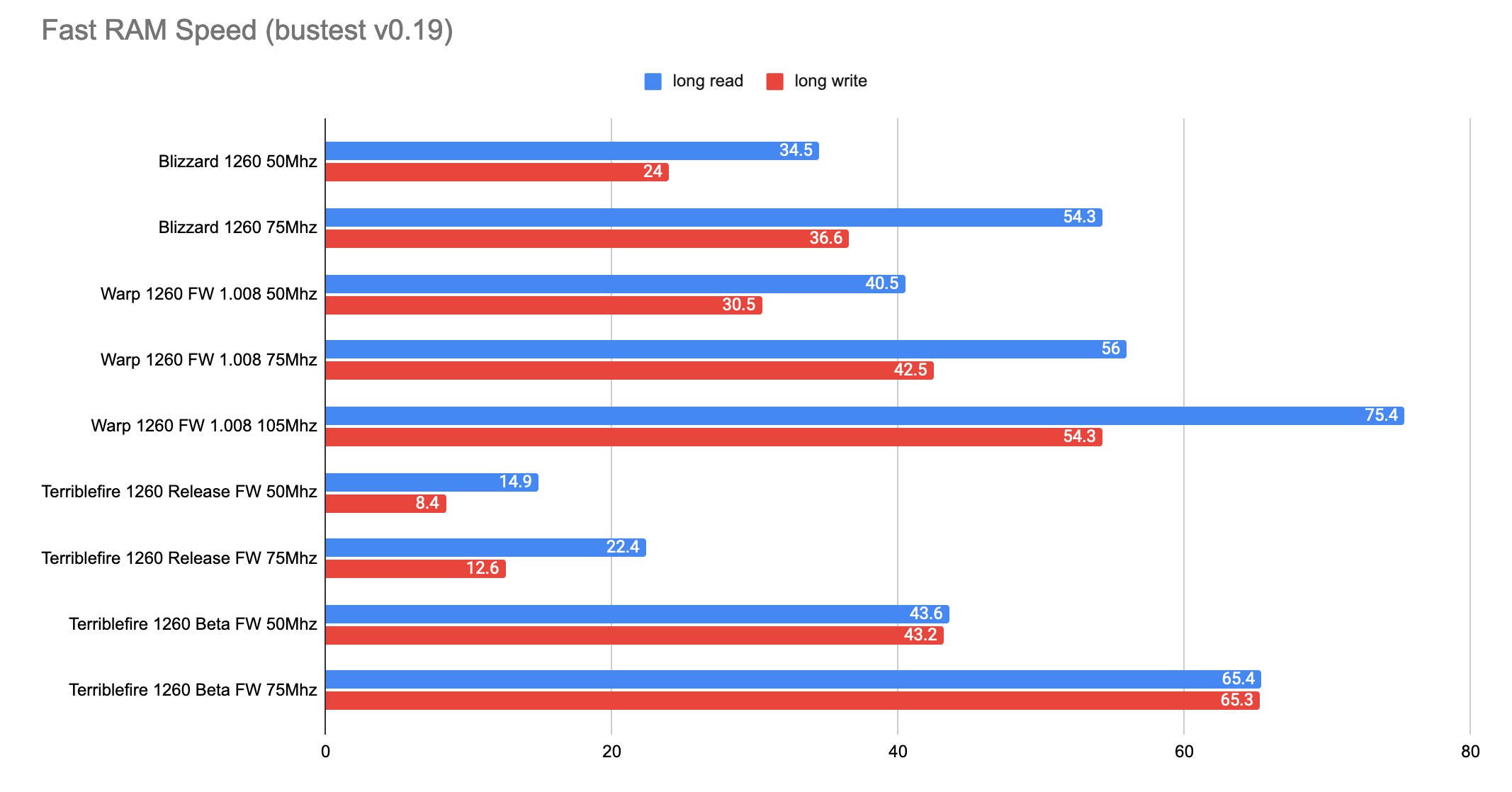 Here are the bustest results from my LC060 Rev.4 @! 50Mhz. How do these compare two your Blizzard card?

It is basically for the overclockers. Nothing for those of us mostly wanting to run at stock speeds. Good info here.

Basically, the 060 had a long production life from ~1994 to ~1999 with the same clock speed. In that time the production processes have improved a lot making the later parts run cooler and more stable at higher clock rates. Even the jump from Rev 5 to 6 was significant.
Post Reply
15 posts