I just found a scan of an old french magazine (L'Ordinateur Individuel, september 1985).
In an article dedicated to the new "Commodore Amiga", there is a photo of an A1000 with a very strange mouse : 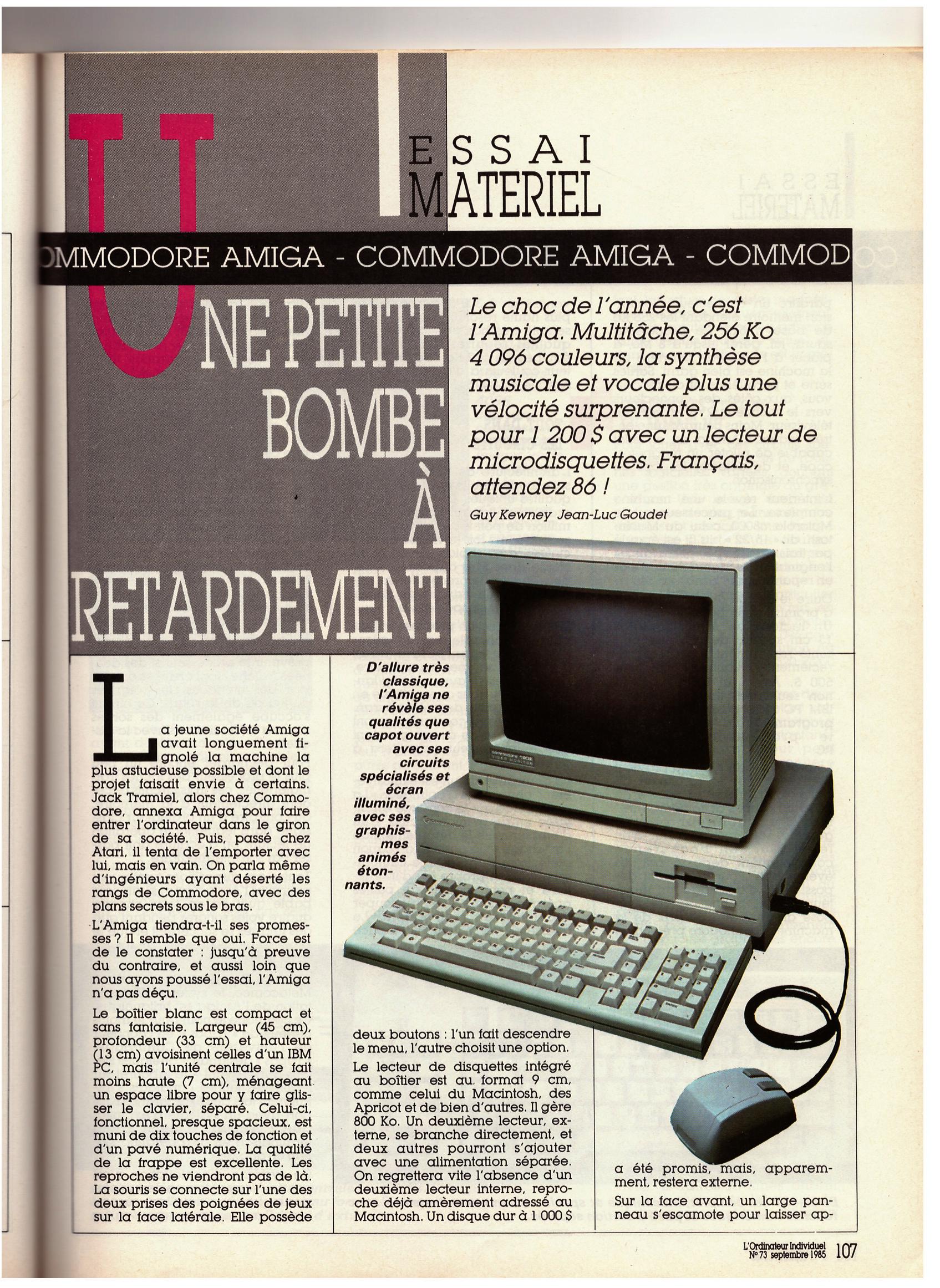 Do you know this mouse ?

by McTrinsic
Probably a prototype.

The Amiga itself is a prototype or very early model. It has ‚Commodore‘ embossed into the plastic instead of printed.

by intric8
That is the Amiga Development System! (The Amiga before the Amiga.) So, yes - that mouse is pre-retail. Wow!

by BatteMan
I'm pretty sure too that is a pre-retail A1000.

For the mouse, as it's an "Atari joystick port" and as this mouse doesn't look like others Amiga mouses, it's maybe a mouse from another computer or from another tierce manufacturer.

This mouse is really "interesting"

It is indeed. I happen to have one. Have you seen mine? =)


Also, I do not speak French, but does it mention the model of the monitor? I've never seen anything like that before, either. Note how it has the headphone jack on the front, and the weird power button!

by Christian
That is a Microsoft mouse. One of the early ones with steel ball. Xerox used this as well.
See here

You can even see the same cutout for a manufacturer’s sticker on the lower front of the mouse.

I did a bit of research into the monitor. Originally I thought that it may be a variation of the Tandy CM-11 based on the on/off switch and the horizontal line. But looking at a video of that monitor (used by Commodore with the 128 a well) shows that the loud speaker(s) is/are on the lower side(s) near the front of the case like the 1080. Also, the headphone jack on the front, left side is in the general same location as on the 1080 (left side, front).

I think that this may be the same monitor as a 1080 internally, possibly the original Toshiba monitor on which the 1080 is based. I found a couple of other FCC ids with the same prefix (AGI9XA) as the 1080 monitor, but haven’t found any pictures yet. I may post on the X68000 group on Facebook which has a lot of Japanese users who are into vintage computing. Maybe someone recognizes it.

For the monitor, take a look at the cover of the magazine, you can read the sticker on the monitor!

Christian : It's our mouse ! Thanks!

by Christian
Yes, though I think/remember that it says 1902. Can’t tell from that scan. I think it’s a Fujitsu 1902 (aka 2002 aka 1080 (not the Toshiba variety)). I found a couple more pictures of this square 1902 and the ‘regular’ 1902 and the loudspeaker grille matches, as do the foldout feet at rear on the underside. I’ll still try to find the square version, but now I know to look at Fujitsu monitors. I have been looking for this monitor for 35 years (not intensely...) as I really like its looks.
All times are UTC-07:00
Page 1 of 1
Powered by phpBB® Forum Software © phpBB Limited
https://www.phpbb.com/