Amiga Keyboards: The A2000 Had Them All

What a neat comparison! I've just recently been looking into keyboards myself, as I needed something for my A2000, and even my A1000 keyboard has been having some issues with keys sticking.

I thought it would be an expensive hassle to go out of my way to find an A2000 keyboard with mechanical switches, and the info in this thread tells me I'm probably right, especially seeing how Amiga keyboards are usually priced on eBay. Instead, I got this: 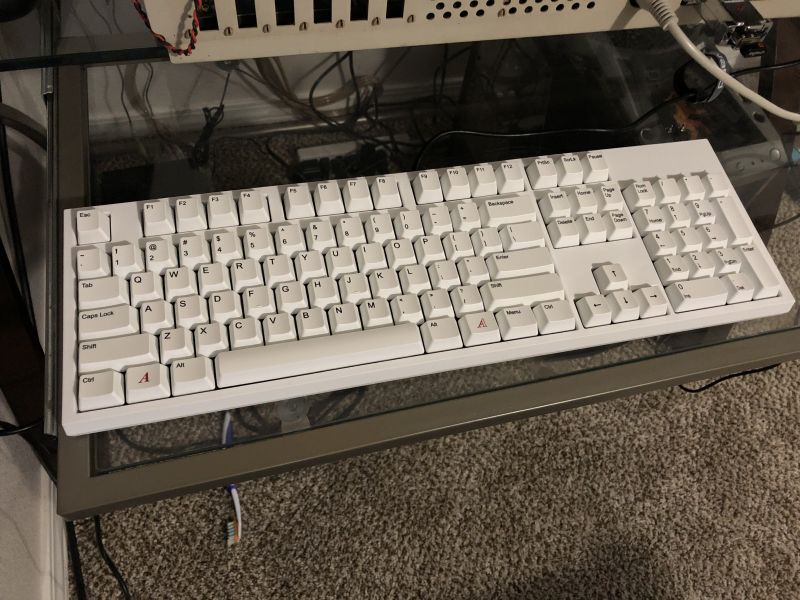 This is a custom WASD V3 keyboard with Cherry MX Blue switches (I love the feel of Blue for typing), but on their website they actually provide the option of making the OS keys Amiga keys! You can technically upload a fully-custom keycap print, but that would be a ton of work, so it was amazing that they offered the Amiga keys. In the order comments I asked them to print those keys red, and they obliged.

I also had the option of making some of the keycaps gray like the Amiga keyboards (and many other 80s keyboards), but I had to go with the more minimalist look of all white. It's really the Amiga keys that makes it feel right at home, anyway.

For an adapter, I use the Lyra 3 from Individual Computers. The adapter has some really smart features such as remapping keys, mapping useful keys to ones that don't appear on Amiga (eg. Home/End map to Shift+Left/Right or Alt+Left/Right, depending on your setting), and even the "stealth" protocol that lets you use MMKeyboard to map OS commands to your keys. Important to note is that the WASD V3 no longer supports the PS/2 protocol needed for this adapter, but you can downgrade the firmware to V2.5 which does support it. That's another big reason I went with this keyboard, as it's quite difficult to find modern mechanical keyboards that still support PS/2.

Not to derail the thread from the topic of actual A2000 keyboards, but I wanted to share this as a solid alternative.

The rarest Amiga 1000 keyboard is the Cherry unit. It never came with the Amiga 1000 - it was sold by Cherry as a replacement/upgrade.

They are ultra rare.

Since it doesn't fit in the nice keyboard cubby of the A1000 I can probably guess why no one bought them and so few show up in the wild... Very German, function over form

Interesting thread! I am currently in the process of restoring a couple of Amiga keyboards myself – Cherry, NMB Hi-Tek ("Space Invaders") & 'regular' Mitsumi; basically the only thing missing are some extra localized keycaps) and me deciding whether it is worth it to take the NMB Hi-Tek completely apart (to clean springs). Although it doesn't seem to need it. However, some keys are slightly more "clicky" than others.

While doing this I was wondering: has anyone tried *replacing the keycaps* on the Cherry A2000 keyboard with WASD keycaps? I am finding it difficult to source matching Cherry caps, and was thinking of ordering some – if that is at all an option.

But obviously they have to closely match color-wise, as well as the key imprint (probably difficult as the Cherry A2000 caps were double-shot)..!

I was thinking how feasible this would be too. I don’t own an A2000 Cherry keyboard, so for me, this is an entirely theoretical exercise.

WASD do allow you to upload a file with all of the key cap lettering and colours on it. You download a drawing package and a template. Then save and upload. I started doing this myself but then got distracted. It would be possible to share this file so that all A2000 Cherry keyboard owners could get the perfect result. A github project would be ideal for this. Perhaps someone else has already done this and would be willing to share?

However, one potential problem would be the Amiga’s now non standard key sizes. The obvious example here is the Big Ass Enter Key. WASD do either ANSI or ISO, but no Big Ass Enter layout. So, that would be one key that you could not replace. You could maybe go for ISO and the print a beige blank and mount that next to the Enter ( similar to the A1200 keyboard) but what would you mount it on? Even if depressed, this key would not register anything. ( not ideal ). Probably just keep the Enter Key from the old keycap set?

I am also pretty certain that there are other non standard key sizes on the A2000 Cherry keyboard. For example, the tab is larger than standard MX nowadays. It may be possible to get round this by swapping with other keys of the required size. No reason the keycaps have to be mounted in the order matching the file, of course. You would need to use the same row though I think because of the profile differing on each row?

Caps lock would also be problematic. The Amiga Caps lock has a see through plastic insert for the LED to shine through. No such insert on the WASD keycap. Maybe drill a hole? Urgh!

Just my thoughts on feasibility really. Would really love to see if anyone has been able to get anything to work. If you could share their file, so much the better.

I am actually only going to replace a few of the caps if this approach is feasible. The Caps Lock (which is quite special on the Cherry kybd, as it is not simply a "dot" LED is in mint cond. and will stay), as will the left+right (red!) Amiga keys and the (ISO) Return key. My exercise is simply to do a minor change to the layout (although being able to have a full compatible set is nice as well)

However, if the replacement keys stick out like a sore thumb due to either size or color difference, this would obviously not be worth it. It is merely to improve the aesthetics.

If you are just looking to replace standard 1u keycaps, or where the size matches then it should be possible to do this. I would agree.

I can see why you are worried about the colour now. It really would be tricky to get this right. You can play around with colours in the line based drawing app that WASD suggest. So you could hold up a keycap to the screen and try to match that way. Even if it matches on the screen though, that’s no guarantee that it would match when you receive the keycaps I would guess.

Could someone do me a favor and post a well readable shot of the connector of the keyboard. I learned that the connector has the numbers on them. I’d like to make sure that for the adapter I plan to make i don’t get them mirrored.

Wow! I wish we could see how these things have moved around in their lifetimes, similar to those weird "where's george" dollar bills people mark up so you can track them online.

I've got something like four spare keyboards (along with all the ones already tasked with other machines). Now you got me taking a second look at all of 'em, lol. I know for a fact that I don't have any chicken lips models, but it'd be interesting to inventory just which other models I possess.

Thanks for the research, it'll come in handy!
Post Reply
20 posts