Looking for a modern monitor solution for my Amigas

blindguy wrote: How does the OSSC handle interlaced?

OSSC can only do simple bob deinterlacing, which I tried on Amiga and it was pretty underwhelming. In January, an "OSSC Pro" was announced which is much more powerful and is expected to have more advanced deinterlacing algorithms.


fxgogo wrote: I will most likely end up with the OSSC as well. I do however want to be able to emulate the CRT look on a modern flat screen monitor. Not sure if the OSSC can do this, I know I can with emulation, but we really need a hardware solution for this.

OSSC has some really fine-grained scanline emulation control. If scanlines are mainly what you're looking for, then the OSSC has it covered.

I used an OSSC for a while and was extremely happy with it. The one caveat is that it has difficulty syncing with the Amiga's RGB output and can require you to power-cycle it a few times before it manages to sync. A VGA adapter avoids this issue, but the problem then is that the OSSC's VGA input doesn't work with the low-pass filter that is needed to eliminate all the noise that comes through in the signal.

I was also really happy with the Indivision ECS, but you have much less fine-grained control compared to the OSSC. If you want as close to a pixel-perfect image as possible, then you really need the OSSC's advanced sampling and scaling options. Maybe the optimal solution is to configure the Indivision ECS to output at native resolution, and then scale it with the OSSC! I haven't tried that yet, though.

Edit: This image I captured a while back to test word processing is a good example of how great of an image you can produce with OSSC and Amiga's native RGB output. It's practically indistinguishable from an emulator. 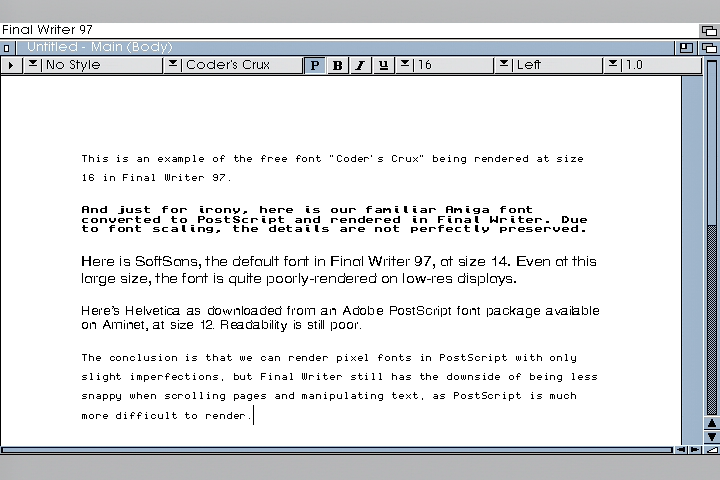 Have you seen the news on the new OSSC Pro? I wonder how that would compare to your current experiences.

I also picked up the zz9000. I haven't installed it yet, though. But a friend of mine put one in his A3000. He's kind of an A3000 video card collector. According to him, the video and USB are "very beta". I wondered what he meant and looked over his shoulder. I did see some window artifacting (like, maybe a 300 pixel line that stays on-screen after you move a window - stuff like that) but nothing major.

But from my friend's point of view, the zz9000 has no native pass-throughs like, say, the Picollo card from a million years ago, or the Matzes a1k.org Graphics Adapter. For some people that's a thing. I don't know enough about it, personally.

Finally, I asked him which card he ultimately liked best out of all of them.


Going back to your question about which gfx card I like the best, the thing I still love about the Piccolo is the raw pass through of the native modes. You see exactly what the Amiga puts out when you aren’t on an RTG screen. Picasso4/zz9000 both intercept the output from the video slot, and interpret/modify it to a degree. As evidenced by this problem with overscan screwing up.

Another friend chimed in:

That’s why I like the Indivision ECS v1 over the v2. The v2 does the same sampling. And according to Jens its scaler is better than those in the LCD monitors.

Anyway, I plan on setting up my zz9000 later this Spring. Looking forward to catching up with the Big Boys.
Post Reply
12 posts