I love my newly acquired Amiga 1000. But I've always much preferred the sound of the Amiga with the low pass audio filter disabled. Unlike the software switchable filter on later Amiga models the filter on the Amiga 1000 is always on. Fortunately there's this simple hack to disable it - either making it switchable as in the original hack description or permanently off (what I chose). Probably this hack isn't news to anyone familiar with the Amiga 1000 - but I figured I'd share some photos of the end result.

I found the hack itself on Tom-D-Tek's AMIGA Hack Page. I noticed a minor error where the labeling of pins 6 and 7 of the LF347 were swapped. Here's the corrected version: 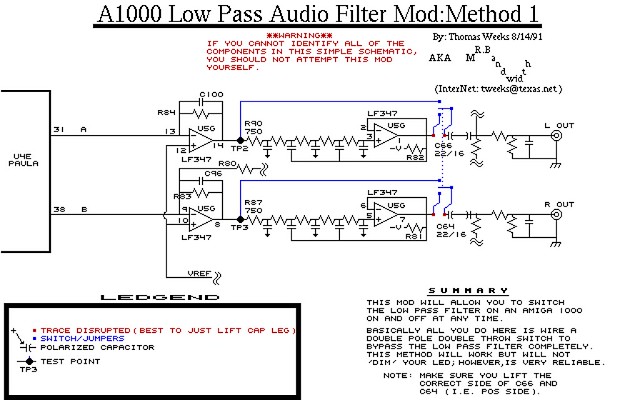 The section of interest on the original board looks like this (daughterboard has been removed): 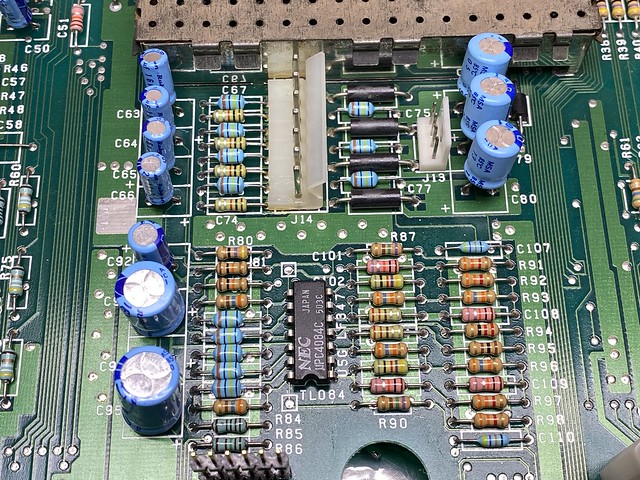 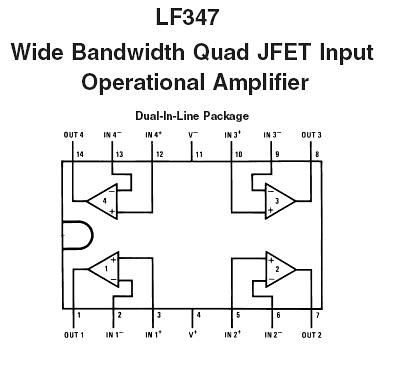 In order to interrupt the original filter output path the positive lead of C66 and C64 electrolytic capacitors are lifted and connected to the filter inputs at TP2 and TP3 respectively. No permanent modifications are necessary (no traces cut) - only a bit of soldering (and desoldering). You'll want to use good quality temperature-controlled, ESD safe soldering and desoldering irons to minimize the chance of damaging anything. 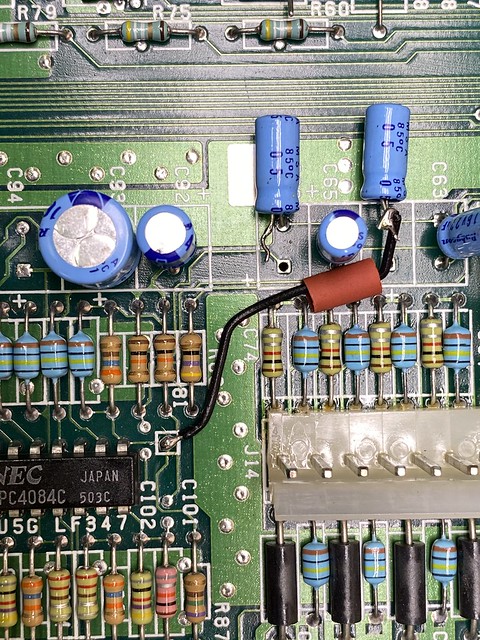 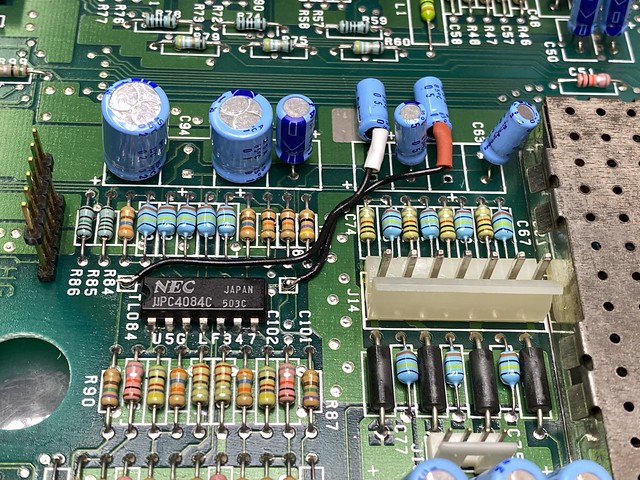 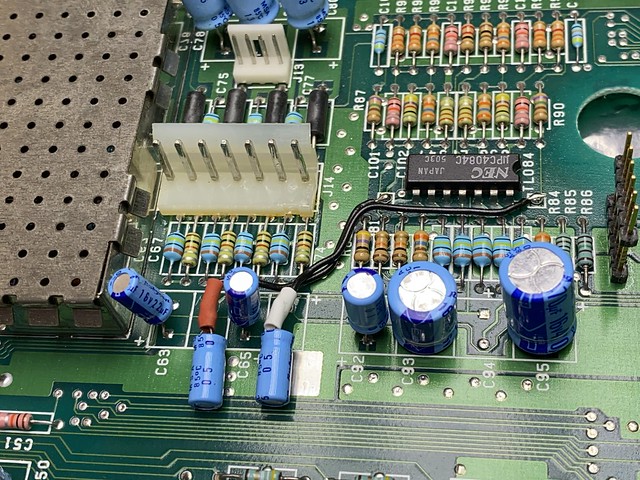 Here it is mostly buttoned back up. I turned it on and heard a beautiful (unfiltered) kickstart boot chime. 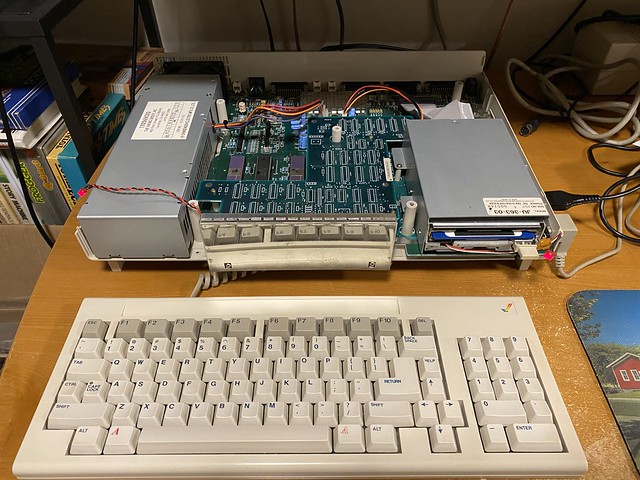 Thanks for posting this. I may have done the mod incorrectly, I will verify using this information.

I asked a friend of mine who is an Amiga/hardware guru if he had ever seen this hack before.

Not with that one. Only the more elaborate one which controls the filters with the CIA (dark LED -> low pass filters off) just like all later Amigas.

That's high praise right there, I can guarantee.

As Eric cited me - this is really great.

P.S.: I can‘t believe that I wrote “less modifications” - I must have been tired. Fewer modifications is the correct way to say it

After recently doing a full re-cap of the Amiga 1000 that had been collecting dust in my back room for the last two decades, I decided on also performing the audio filter mod. A quick search led me to a number of sites, and when I came across this post I liked what I saw.

I always prefer mods that have the least amount of impact, and this one fit the bill nicely, but as I was studying the mod instructions something occurred to me. The op amp that follows the filter is configured as a simple unity gain buffer; it's not configured to provide filter gain. The filter itself is passive, so I should be able to simply bypass it with a short between the two op amps. I reasoned that the loading caused by the filter components would have minimal effect, if any, on the low impedance output of the first op amp, so I set about creating a simulation in LTSpice to test my theory. The simulation showed no difference in sound quality between the original mod and my alternate mod, so I gave it a try, and it worked just fine.

The alternate mod is simple, and requires soldering only two wires across pins on IC U5G. The mod can be done on either the bottom or the top of the board, and is as follows: 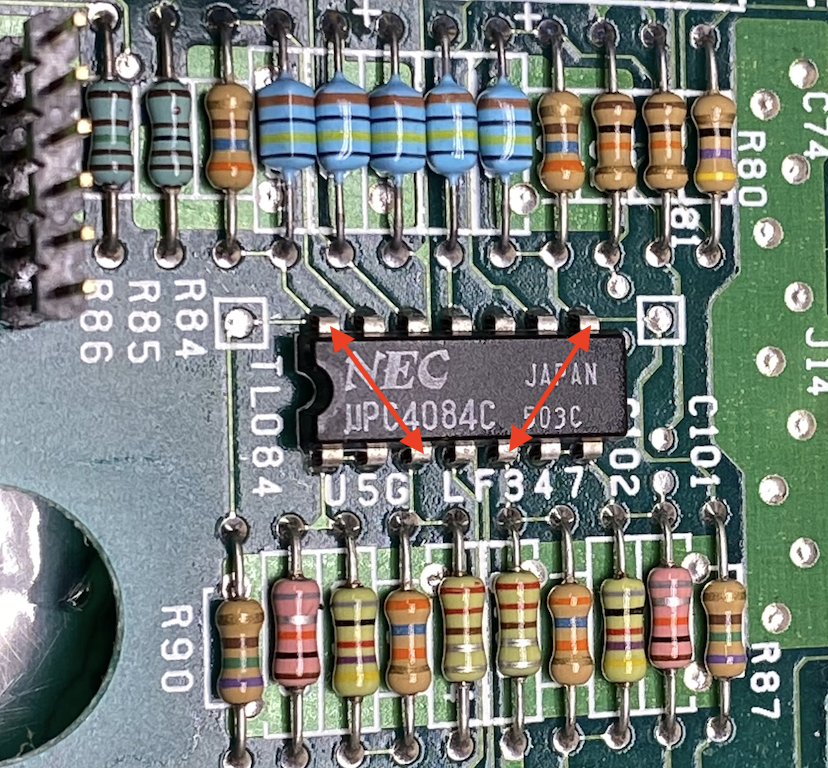 That's all there is to it. For those of you interested in how I verified my alternate mod with LTSpice, continue reading.


When I embarked on verification of my audio filter mod the first thing I looked at, since I was curious, was how the Amiga 1000 audio filter behaved. The following figures show the schematic for one channel of the audio filter as entered in LTSpice, and the frequency response of the signal at the output of the circuit. 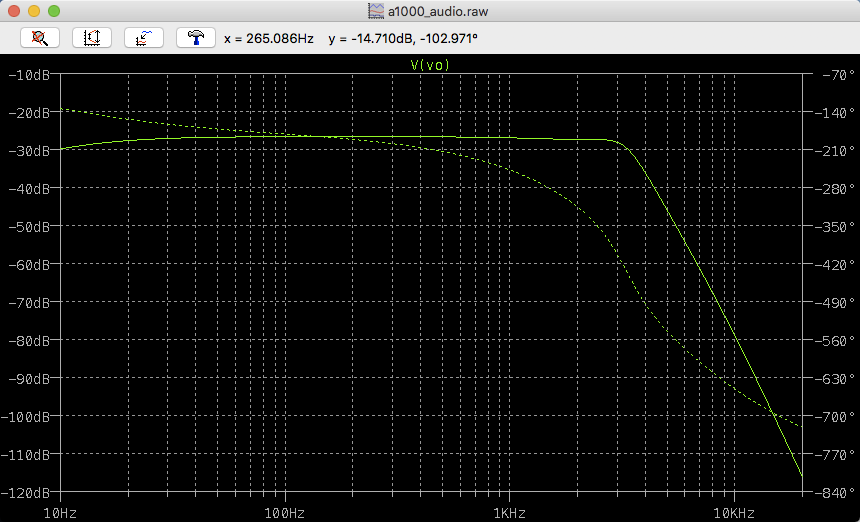 The filter cutoff frequency is right around 3.5KHz, and the response is fairly linear in the passband, with a drop to about -3 db at 10 Hz. The stopband response drops off sharply with a slope of about -30 db per octave. This filter produces an output with bass and midrange, but not much in the high end. The sound mimics that of coin-op arcade cabinets.

Next, I looked at the mod from the original post. 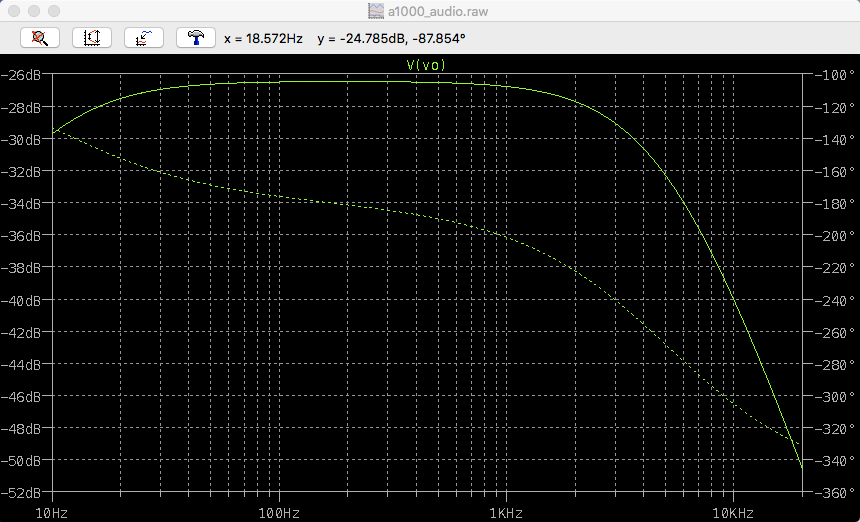 The passband response and cutoff frequency are pretty much same as with the unmodified circuit, but the drop off in the stopband is much more gradual, about -6 db per octave. The sound is definitely much brighter with more high end than with the filter in the circuit.

And finally, I compared my alternate mod to the original mod. 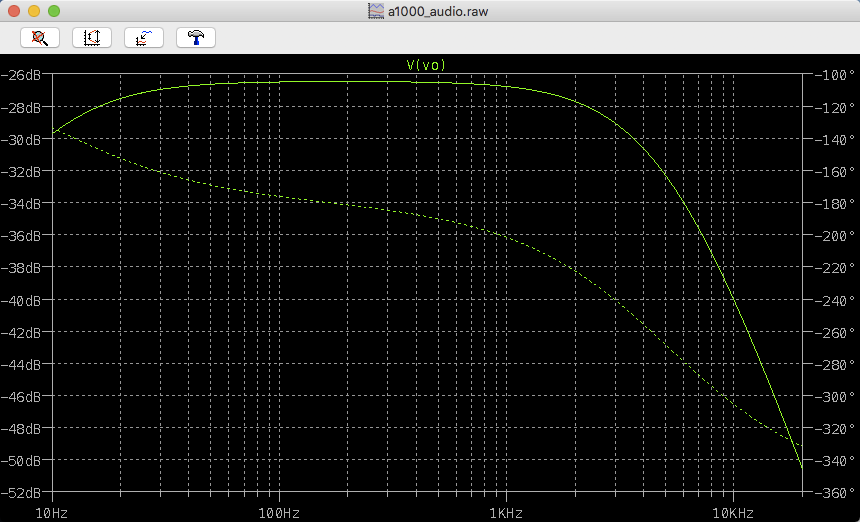 I really like your version of the mod. Really easy to install - and with Spice simulation / verification to boot. Great stuff!

Excellent tutorial! Does someone have either an audio or a video showing the before and after difference in sound?

Thank you for this great tutorial.

Did the mod this weekend, works great! 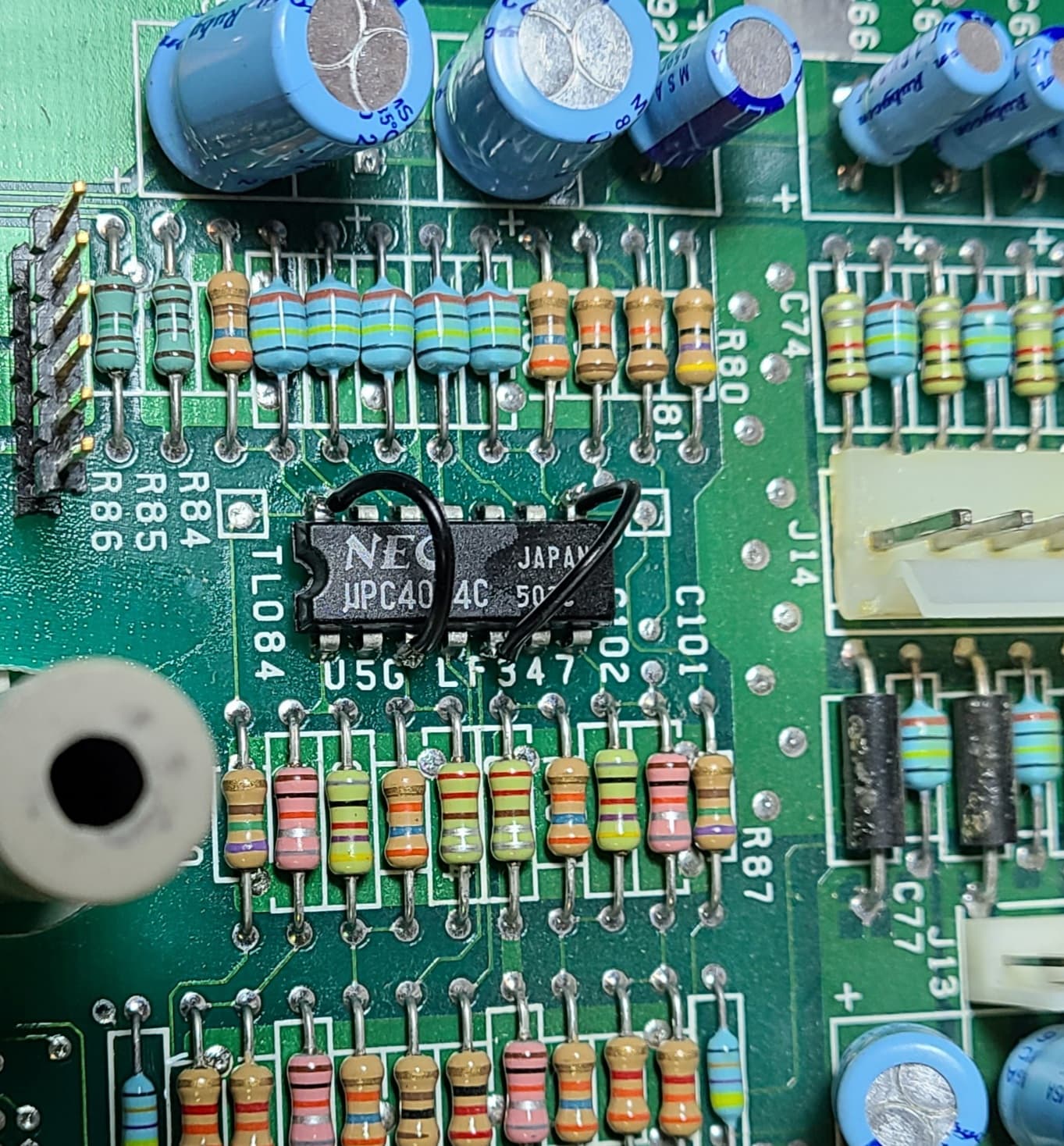 Looks good. Did you get a chance to do a before and after comparison?
Post Reply
13 posts