Adding SCSI2SD to 1.3, having issues

Funny - way back when I first got my NOS 1200, one of the very first things I bought was a (then) shrinkwrapped copy of Diskmaster. Not DM2, but the first one. DM wouldn't run on my 1200. So, grudgingly I went and got DM2 for it, which did work.

When I load DirOpus I can see my total RAM and CPU usage but not the RAM usage the way you describe. I'll see if DM does that.

I've taken a brief look at the article you linked to regarding drives larger than 4 gigs, and while I'll read into a bit more later, it seems like they're just talking about partitions to me. As in you can't have a single "drive" in Workbench go over 4gb, but that has nothing to do with the size of your physical hard drive. DOS has always had 2gb limitation to it, you just divide them up or leave empty spaces in the drive. For my DOS/Win3/Win98 machine I've got around 5 2gb drives I can use in DOS and the rest of the drive is devoted to Windows98. That's no big deal at all, as we all know 4gb is plenty of space when dealing with the Amiga. So things are just looking stronger with my belief that there is no true hard drive size limitation, just a partition size, which is perfectly understandable. My problem is there are loads of people out there that make it sound like it's a physical size issue with the hard drive itself.

I have indeed read both cases - both the partitions and the sizes of the drives.

I was having all kinds of hell with an 8GB SDmicro I tried to use initially. But that was before I knew what the hell I was doing. But even still, it took so long to deal with...

At the end of the day, I'm glad I've got a 4GB in there now, and am seriously considering dropping down to 2GB. The size is plenty big, and it would probably speed things up a bit.

Later... I'm just going to enjoy what I've got for now.

Oh, by the way I think I am using Disk Master II by the way. Which also reminds me; remember when I said the only reason I mentioned how to install A-Talk III to the hard drive was because the disk I got did not come with a hard drive intsaller built in? We speculated if some cracking group may have just deleted it to save space, I don't think that's the case now. The version you gave me is not the same version at all! The one I got (and the only one available online besides here) is version 1.0, the first release. Which may have been released before hard drives were given much of a thought. You had version 1.3 I believe, which indeed comes with a hard drive installer... although a pretty bad one at first glance. If a hard drive "installer" tells you to input assigns into your startup sequence, it's not a hard drive installer at all; it's a copy program that copies files from your disk to the hard drive. You can do that yourself, which is what I did for version 1.0 - A good program will either put in the assigns itself, or (what a concept) make the game so it runs without a damn assign period!

In regards to icons; well, what do you think of these? I mean I've posted this shot before so pay no attention to the circle, haha. I personally love my icons but I'm afraid you'll be needing a tutorial on how to get them on Workbench 1.3 - It was quite an effort to collect these. Plus I'm sort of hacking Magic WB in. Not truly, in reality I am doing nothing what so ever with MagicWB, I just use a program that starts Workbench with 8 colors instead of 4 and another program that allows me to to replace icons with other icons.

Honestly I'd rather have good old blue and orange but never found any icons I particularly cared for. Likewise with the MagicWB type of icons, It took me forever and a day to find ones that looked correct in medium resolution and in NTSC. I did find them though and would be more than happy to give you mine and the program needed to display them. I've already made a video for it, just another one I'm hanging onto at the moment...

I've got more material than I know what to do with honestly. lol. I just got to be feeling it in order to post it. If you don't want that grey look then you'll have to dig through the Fred Fish disks and look for better 4 color icons from people. I have come across a few but by then I decided I liked my 8 color look. 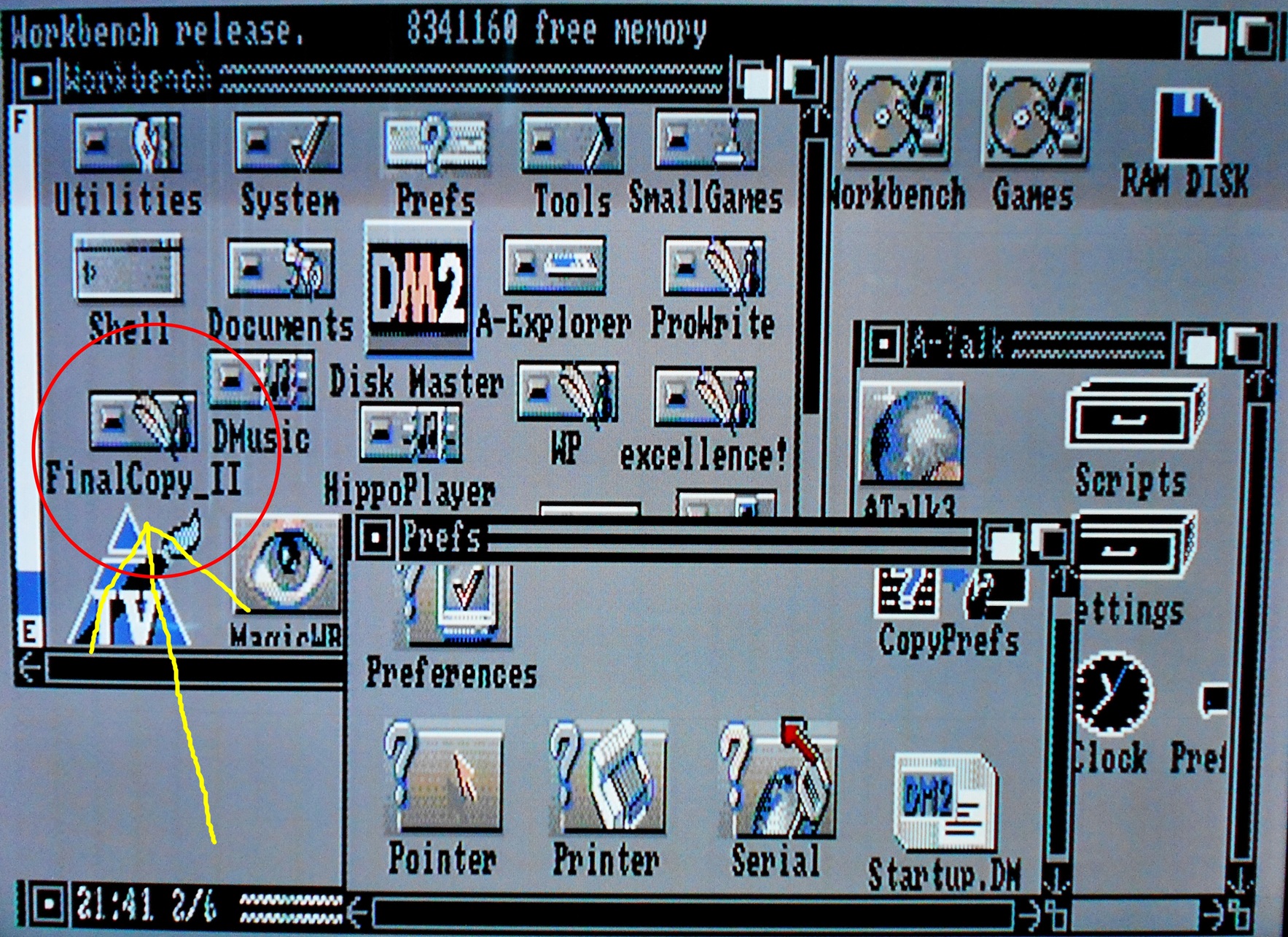 And here is a screenshot of my Disk Master II setup. Funny, the files seen on the right are those in my Earl Weaver league disk from back in the day

On the title bar you'll see a C: - Which stands for chip ram and a F: for fast ram and then the total next to that. I don't think mine is correctly including my half meg expansion as part of the chip ram though. I did the modification to make that a part of the chip ram but disk master always reports chip ram below a half meg, I believe sysinfo does report that as part of chip ram for me though. 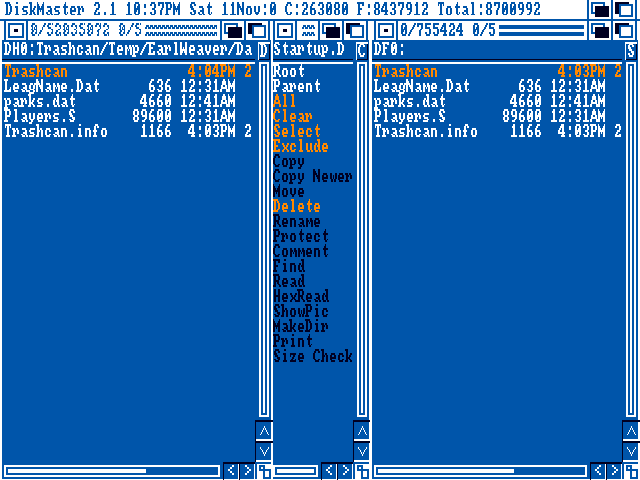 You had version 1.3 I believe, which indeed comes with a hard drive installer...

And, mon frair, a 1.3 ICON. An amazing, glistening icon never to have ever been dreamt by a 1.0 release. So, there's that. And probably some bug fixes.

As for DiskMaster ... so funny. I am indeed using 1.0 and I'm pretty sure yours is 2.0. Mine has all kinds of crazy colors. Yours has what appears to be a color scheme right out of 1986! It's virtually pure WB blue and white! Mine, right out of the box, was black, red, 2 shades of blue and gray. It made my eyes bleed a little, but at the same time I was nearly entering the Matrix. So there's that.

As for icons... I've been called an "old soul" recently and I guess I'm OK with that. I don't want 8 color icons for 1.3. I want good looking icons for what I've got w/o much fuss. And truth be told, think my favorite HD icon was actually made by Commodore for WB 2.0. It's 4-color, and this cool wide gray HDD. I don't know how to get that off my 2.0 disk, though. I may have to make it myself, as searching Aminet for something like that might kill me. No image previews of anything.

I found a guy on Aminet who claimed to have made 4-color icons inspired by MagicWorkbench. I thought, "Hm, OK, that sounds cool." Ugh, I hate it. I instantly undid what I had uploaded and converted all drives to the large, kind of gigantic Supra HD icon, which I have copies of already.

On the left, 4-color icons based on Magic Workbench. On the right, Supra HD icons.

I'd like to make my Quantum drive icons (System, Fun) be unique from my new SD drives (Flash, Ming). And, honestly, I think the best icons I've ever seen have been made C=.

I mean, I could use this as a template as use the icon editor to make my own. That might take less time than hunting them down on Aminet. You know? I could try and draw a little SD chip, too. That would look cool!

It's the .info of directories or programs that contains the image for an icon. In your hard drive directory there will be a file called "disk.info" I believe, which is the icon for the hard drive. If it's the icon from 2.0 or 3.1 that you want, then copying the disk.info file and bringing it over to the 1.3 system should give you that icon.

But to be safe I recommend using a special program to switch the icons, just in case the .info file contains text info that's important (and I'm pretty sure it does - AKA you won't be able to open your hard drive if you simply swap out the disk.info for the other, so when you switch it over put it in another folder and use the special program). Also; you'll want another program to switch to invert the colors. The reason that 4 color magic workbench inspired icon looks so terrible (besides being stretched in NTSC mode when it looks to be designed for PAL) is because Workbench 2.0 and above switch the white and black in the color palette. Do you notice my RAM disk icon which is black? It should be white in a standard Workbench 1.3 good old blue setup. Because I changed my color palette to match a 2.0 and above Workbench it switched the white for black. And I've never been able to figure out how to change the RAM disk icon, it's complicated because it's RAM, it can't be saved.. ahhah.

But I also have a program to switch out the now black icon for white and indeed it should work the other way around as well.

Go here and use your browser to search for icons. If it's Workbench 1.3 icons you want Aminet will not help you. Search for icons and then go here http://aminet.net/misc/fish to find and download the disk that contains the stuff you're looking for. They are LHA's, so no need to waste disks on them... Although I wish I could, because the previous fred fish disk download location I used had the real disks... Which I'd like to use... Ugh... Anyway, it's a lot of fun when you're in the right mood. I can't state how many awesome programs I've found through the fish disks.

Of the few Workbench 1.3 things you find on Aminet, they were almost all originally released exclusively to Fred Fish. Over a thousand disks worth of freeware and shareware. You just need to have an idea for the kind of thing you're looking for. In this case, icons. I have found 4 color white/black/blue/orange 1.3 icons from there before. But that's not my headache this time

I'll point you to the other programs I use in order switch out the icons as well as change out the black/white for icons that need that but you'll have to wait until I remember it and am in front of the Amiga. :p - But maybe you'll find them searching the fred fish disks as well.

Is that the ENTIRE TOC of Fred Fish disks? That's amazing. Thanks for the link!
Post Reply
28 posts