Now that I have solved the issue of getting files from the Internet to the Amiga, I started reading up on WHDLoad. The setup methods I have read about so far involve WinUAE and Amiga ROMs, which I don't want to bother with at this time.

I just want to:

You will need a way to mount the ‚Aux‘ CF under AmigaOS. I am not familiar with the ACA accelerators and I am confident you can find something about that on the net or in the manual.

Next you might need something to unpack the archives either on the Amiga or on the PC. Usually these archives are packed with lha on the Amiga. I think 7zip on the PC can unpack them. Lha for the Amiga is available from Aminet. Please be aware that in some cases unpacking archives on the PC may result on errors on the Amiga.

To start small my suggestion would be to get one WHDLoad was install on that CF. There are some available from the EAB server.

If you want to make your life easier get the ‚BetterWB’ package.

And of course you need the user-Archive from the WHDLoad Site. Check the instructions from their site.

Once you have WHDLoad and BetterWB installed you can start unpacked WHDLoad archives via double click.

You can only start OCS/ECS games, though. So no AGA games.

First of all, thank you for the help.

I managed to get WHDload installed but it did not make a workbench icon. The only way I know how to get whload going is with a shell command. When I tried installing a game it gave error messages I chalked up to my inexperience with AmigaDOS. I then browsed to the directory where the game lha had been extracted and found the ".slave" file. I tried to run the game and it gave another error that I figure was me not doing something I didn't know I was supposed to do.

I think I need a more beginner focused amiga forum. Everyone here is on a higher level.

I hear ya, oldbull. Just being honest - I've never set up WHDLoad. Ever. I should give it a go some day. I had a machine once where it was pre-installed but never poked at it.


I think I need a more beginner focused amiga forum. Everyone here is on a higher level.

That was exactly the reason this place was founded originally. I could not find a single step-by-step source for moving files from Amiga to PC years ago. When I finally figured out one way to do it, that's when I knew it needed to get put out there somewhere.

If you do figure things out (I'd poke around YouTube first) maybe consider jotting down your steps. The more detail the better. Then I'll try to follow your steps. My 2000 could handle it so that's where I'd try it first (assuming it works in 1.3). I've always heard it was rather resource hungry.

Oldbull, i've got the very same hardware setup as you do (A500 rev 6a +ACA500+, fresh 3.1 install), if you want i can try to install WHDload during the weekend and share the results w/you if i am succesful!

After a half dozen failures I have concluded that WHDLoad "installs" are not the actual game. They are merely patchers for the original media.

I found a game on aminet that does not use WHDLoad and was able to get that working.

I then tried using WHDLoad with a game "install" that I do have the disks for and was able to get that game installed to the CF card.

Thoughts are scattered at the moment. I'll need to think about how to write my steps in a way that makes sense.

I am pretty certain that these are the full games. Just download and unzip and you are good to go.

intric8, Here you go as best I can recall what I did. Again I credit McTrinsic for pointing me in the direction to get started.

Copied both files to a CF card

Plugged the CF card into the AUX slot of the ACA500+

Booted into WB3.1 using the OS that comes with ACA500+

Found a "how to" online that was written for WinUAE.
http://guide.abime.net/wb3.1/chaplha.htm

Had to study the commands to figure out how to modify them for my directories having different names.

I apologize for being away a few days. Glad I could help a little here. I am usually a bit short on words as most of the times that I’m here I am browsing this forum with my mobile which makes typing longer texts cumbersome at least.

If you have full installs you usually have a picture to double click. However, it is possible that this icon will only appear if your system is able to decode the picture data. You might need an alternative ‘icon.library’ for that. It is available for free from aminet.

Please be aware that WHDLoad itself doesn’t do anything. You need the actual ‘slaves’ that will then call the WHDLoad binary for support

There are guis available to facilitate browsing larger WHDLoad collections but I don’t use them. So unfortunately I can’t help with those.

WHDload is quite simply one of the best things to ever happen to the Amiga IMO, I was using it running AmigaOS 3.1 on my A500 with an ACA500 and an ACA1232.

As a very long term Commodore user my earliest experiences with Commodore were the VIC20 and the C64, naturally both have a rudimentary DOS/BASIC interpreter built into the ROM - Something made vastly better with the simple addition of an Action Replay cart or JiffyDOS ROM. I liked this, as there was always an OS ready and waiting on every reboot of the machine so I could tinker with a minimum of fuss - They felt like computers.

When the Amiga was released I remember going to the city with my parents and seeing an A1000 in a basement computer store with the boing ball demo running - I was amazed! What an amazing machine!

I knew then and there I just had to have one, but wouldn't get one until many years later when the A500 was released..

The A500 came out, my friend bought one, but lost interest in it and offered it to me for a good price. As can be assumed I worked my butt off, scrounged up enough money and bought it - Followed by a 1084S, an OKI printer and another external floppy drive. I really wanted the A590, really bad, but could never afford it. In my opinion this was the limitation of the Amiga platform at this time, in fact it was a limitation of many platforms at this time due to the expense of mechanical hard drives.

You see, without a hard drive to store the OS, the Amiga felt like a clunky console to use, not like a real computer with an actual OS running in the background like my experiences with 8 bit Commodore machines. You booted the Amiga, it came up with the familiar image of a hand holding a disk and you inserted a game and the game ran until you shut the machine off and repeated the process! Made the sales pitch of 'multitasking' impossible! If you wanted an OS you had to boot Workbench 1.3 off another floppy and work from floppy - Not overly ideal. The Amiga 'needed' a hard drive, it was literally built for one.

As a result, while I was always amazed by my Amiga's capabilities, my interest in computing dropped off a little - Especially when I turned ~16 and began to discover cars. I wanted a hard drive, I wanted to be able to 'install' my games to hard disk and have a real OS running in the background like the IBM PC's. Little did I know that at the time this really wasn't possible anyway!

As a result, when I got back into Miggy's, the first thing I was sure to set up was some form of hard drive and real OS - solid state CF HDD's and AmigaOS 3.1, especially with ClassicWB, are fantastic. How I would have killed for such a setup in the day. But this wasn't enough! I still needed some way to install all of my games/demo's (The demoscene was really big in Australia, something that is never really mentioned in the US), along came WHDload..

ClassicWB comes with WHDload pre installed and configured, all I had to do was add my key to make WHDload fully licensed and I was good to go - A step that's no longer necessary. Furthermore, even better still, ClassicWB also comes with the iGame front end for WHDload pre installed! Brilliant! All I had to do was go to WHdownload and every demo and game I could imagine was there, configured and ready to go! I just download the title on my PC, transfer the archive to my Fat32 formatted CF card, drop the CF card into my A1200 using a CF to PCMCIA adapter (or my A500 using my ACA500), unpack the archive and drop it into the relevant alphabetized folder under either 'Demos' or 'Games'. Once this is done I add the folders to the iGame front end as Repositories and I'm good to go!

This was the Amiga I was always expecting, this was the experience I always wanted - My Amiga feels like a real, productive, retro workstation. The WHDload Slave Interface takes care of any compatibility issues between differing AmigaOS versions and differing models of the Amiga itself and your games/demo's install and run simply and easily. When finished running the desired game or demo you simply press a key and drop back to Workbench to run another - On both my A500 and my A1200 running an ACA1232 with 128MB of Chip Ram and a 68030 @ 40Mhz there was no performance issues whatsoever beyond the normal problem with the 16bit bus of the A500 (in fact all OCS/ECS machines with the exception of the A3000 to a degree) interfacing with the 32 bit bus of the 68030 resulting in performance issues running certain games/demo's that hit the custom chipset directly. This performance issue was confirmed by Jens and completely disappeared when running the exact same accelerator on my A1200 with the exact same OS install, it's an issue present if you run the native titles off floppy without the use of WHDload.

As a result, running WHDload, the A1200 literally is the Amiga to have as it can run literally anything developed for the Amiga platform as WHDload takes care of all compatibility issues and some of the AGA/2MB Chip Ram demo's are fantastic, and I by far prefer the graphics associated with the AGA version of The Chaos Engine. I don't use my OCS/ECS A500 anymore, it's safely packed away. Although it is a very capable machine and I do love it, especially with the ACA500/ACA1232 combo.

See a pic of my A1200 running WHDload and the iGame front end below. If anyone wants to see video's of WHDload in action let me know as it really is an awesome bit of software that every Amiga user should be making use of in this day and age. Yes, I still keep a few floppies of my original favorite games for nostalgia sake - But honestly, I hate floppies. 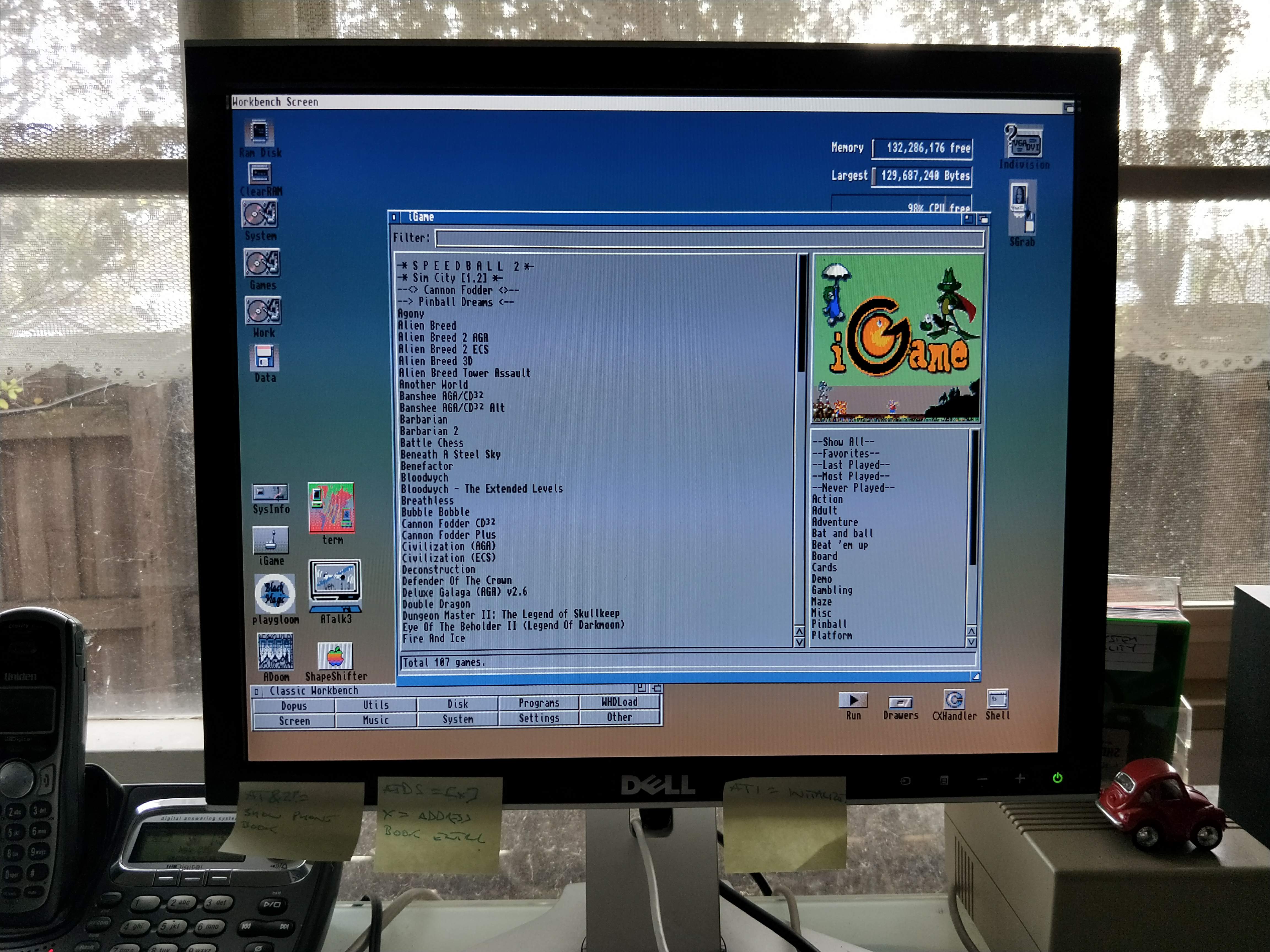