Another thing worth mentioning is how interesting it is to go through the WHDLoad Slave notes, in nine out of ten cases there's numerous changes to software actually resulting in performance improvements overall as a result of tricks the community has learned over time. 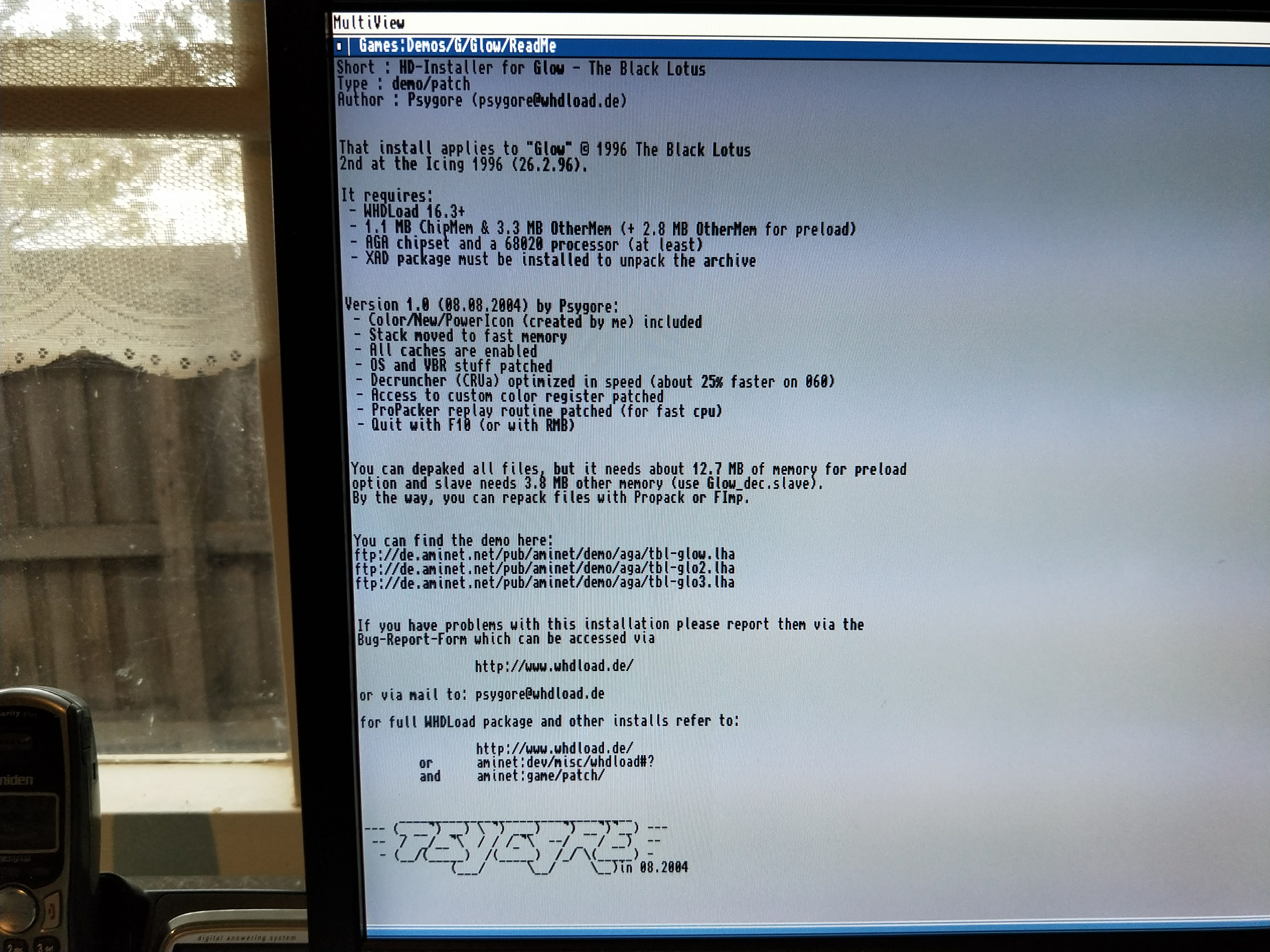 Just downloaded Untima IV for intric8, thought he'd like to see it running on an accelerated A1200 under WHDLoad! Seems to run fine as far as I can tell.

For what it's worth, the moment I put the floppy in my stock A1000 (the machine that was available at the time the game was created) it ran beautifully.

I have friends who absolutely adore WHDLoad and set it up every single time they build a new machine. I did own it once (came preinstalled on a machine) and it was fine to have that there. I've nothing against it at all. I've just never personally bothered with it. If I'm told I need an AGA machine just to run the thing "properly" though, I'm out. I've sold all of my 1200's and only run 1000/2000/3000 these days. And most games run great on any of them. But again - nearly all games were aimed at the 500, and I own most of the software I'm running. So everything is perfect as-is.

Interesting to note: one of my friends typically says a stock machine (even a 1000) will "run WHDLoad fine) with just 8MB fast. Something about WHDLoad eating up at least 4 mb just to run. He must not be hitting the same games you are (or demos at all).

The A1200/A4000 is a better machine all round. Running WHDLoad I can run any OCS/ECS title and as yet I've had absolutely no issues. On top of that I can also run AGA demo's and games - Some of the AGA demo's are quite amazing and still being released. I also prefer the higher Workbench resolutions the AGA chipset is capable of realistically running. Effectively, my A1200 supports everything I throw at it, I don't need an additional machine which is great as I don't have the desktop space for it.

As I stated, I've run WHDLoad on an A500 using a 68030 @ 40Mhz and 128MB of fast ram and the experience was mostly faultless until the 16 bit bus became a bottleneck - Which is a situation people are wrongly blaming on WHDLoad itself. The issue is not present on an actual 32 bit Amiga. If the issue is not present on a 32 bit Amiga and the problem is not present the closer you get to a standard 7Mhz 68000 with enough fast ram on a 16 bit Amiga - Than the problem is not specifically a fault of WHDLoad but rather the 16 bit bus limitation of OCS/ECS Amigas.

WHDLoad needs memory, the closer you are to default 68000 the less issues you are going to have on a 16 bit Amiga, the problem is you are going to need to reboot between sessions as opposed to hitting a key and dropping back to Workbench. Blitter waits are inserted to eliminate timing issues between the processor and the custom chipset - WHDLoad is not really demanding from the perspective of outright CPU cycles, it's not a case of excessive overheads slowing the processor when the issue appears in situations where the custom chipset is hit directly.

It also needs to be mentioned that some slowdowns aren't limited to WHDLoad on a 16 bit Amiga, I have had a 16 bit Amiga run slower in certain scenarios when accelerated due to the need to interface a 32 bit processor with a 16 bit bus.

Each to their own. As stated, inserting a floppy, playing a game, shutting down, inserting another floppy and powering up and repeating the endless cycle is a little too Atari 2600 like for me - I always wanted an Amiga with an actual OS running in the background and the ability to launch my demo's/games from my Workbench, these days I can do exactly that and it's good to see such an awesome platform still being developed by such a devoted community.

EDIT: The PCMCIA slot of the A1200 is also very, very handy when it comes to transferring software from PC to Miggy or adding Ethernet adapters to the Amiga.

It also needs to be stated that I haven't tried WHDLoad on an A3000, the A3000 is different from the traditional OCS/ECS machines in that it is capable of 32 bit in certain scenarios.

EDIT: just watching a video on Dan Wood's Amiga 1200. He goes over various things like web browsing, IRC clients as well as WHDLoad. It really is quite amazing just what the A1200 is capable of, even today.

Definitely one of my favorite Amigas and still one of the most sought after models.

Here is the video

Since it's my thread I can go off-topic without apologizing.

Anyway, I'm getting the sense that I should forget about ever plugging an A1200 accelerator onto the ACA500+. What's the point if wait states are just going to mess everything up?

oldbull wrote:Since it's my thread I can go off-topic without apologizing.

Anyway, I'm getting the sense that I should forget about ever plugging an A1200 accelerator onto the ACA500+. What's the point if wait states are just going to mess everything up?

As stated, when I was running my A500 with an ACA500 and an ACA1232 [email protected], I did experience these wait state slowdowns - However I only experienced them in one, possibly two games and a couple of demos, the problem is nowhere as widespread as many are claiming.

Just don't run Sysinfo and claim your A500 is as fast as an A1200/A4000 because Sysinfo says so. It can be in certain scenarios, but in a handful of scenarios it will actually be slower than an unaccelerated Amiga - In which case you simply switch off the accelerator and drop back to floppy.

And the good thing is, if you come across an affordable A1200 you can just swap the accelerator into it along with the CF HDD and you're up in running in no time again.

I find the reaction of many considering WHDLoad surprising, one person on Reddit especially was downright attacking me over it. In the day, floppies were limiting, but we had to put up with them because hard drives were expensive and small - This is something that I found a limitation even on the early Apple Macintosh's. Once I got my Apple Powerbook 170 with an inbuilt HDD I realized just how good an internal HDD was and I always wanted one for my Amiga knowing that AmigaOS crapped all over System 6 or whatever it was I was running at the time. Now that we have the capability to launch games and demos so easily directly off the hard drive, sticking with floppies is like sticking with Windows 3.0 on a Wintel machine IMO, you can do it, but it's still mostly painful and wasteful - you had one disk for one application that took up 25% of the floppies capacity in many cases! there was floppies everywhere!

Retro isn't just about reliving the past, retro is about improving the past and maintaining a knowledge of how these systems worked for future generations and an expanded A500 is a great, affordable way to do just that - I recommend you give WHDLoad a go and learn something new, I love learning new things, especially where operating systems are concerned.

Totally this. SysInfo is all we really have/use for benchmarks, but it can be wildly inaccurate. I can use it on a 1986 NTSC A1000, and it'll tell me it's in PAL mode.

Or I'll install RAM and it'll only see half of it, while Workbench/Directory Opus sees everything and is happy as a clam.

It's a great tool and I'm so glad we have it. But it's kinda janky.


I find the reaction of many considering WHDLoad surprising

I honestly have, too. Especially by that jackass on Reddit who seemed to be seething about nothing but wanted to share. Sorry about that.

I honestly have, too. Especially by that jackass on Reddit who seemed to be seething about nothing but wanted to share. Sorry about that.

That's OK my friend, they're everywhere in the interwebz, not in our little BBS though!

It kinda sucks how hostile many people can be, when there’s so much room to be positive! Especially when it comes to the Amiga!
Nothing is perfect, but I’d say WHDLoad is quite close

Considering Commodore's quality control in the day, even our Amiga's themselves aren't perfect at times!
Post Reply
41 posts