Just to chime in you might try this tool from the SD Association as it is the official tool for formatting SD cards.

So attempting to use just the Amiga to install 3.1.4 is almost successful.

I'm able to detect the SD IDE as a scsi device when the Amiga boots into HDToolBox. 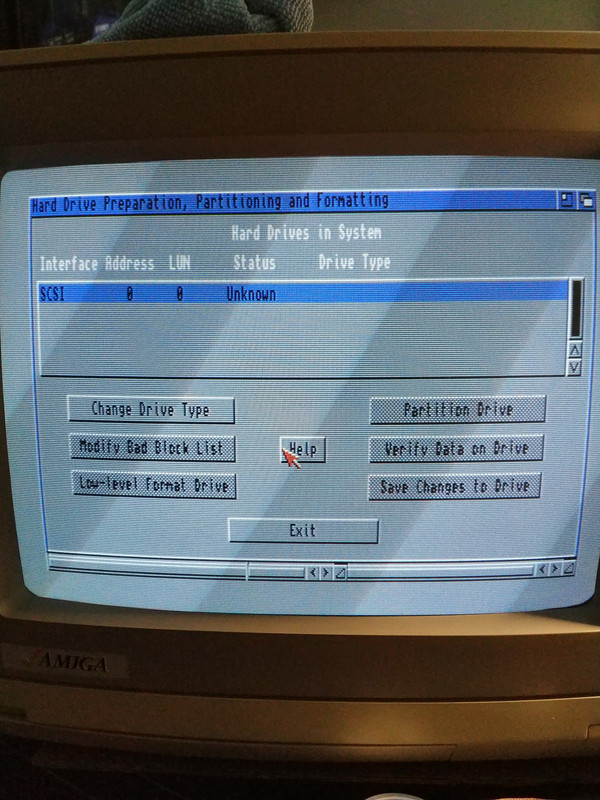 When trying to change the drive type though, the Amiga / IDE will give me the following error when trying to "Read Configuration" 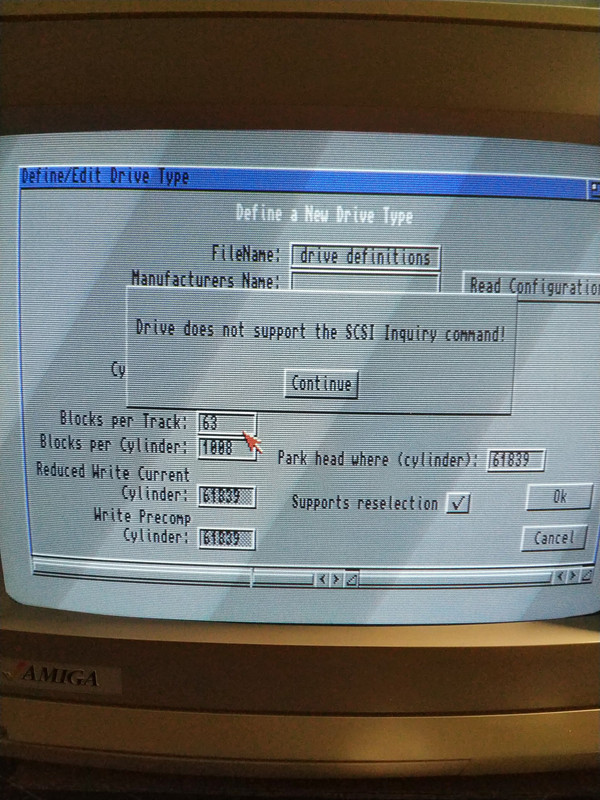 I have so far had one successful attempt partitioning the SD card but the Uninitialized device did not load upon restart.

After trying again, it returned to the "drive does not support scsi inquiry method!" error.

I went through this FAQ attempting to troubleshoot.

It mentioned that I might have to use LoadModule to patch the IDE driver.

Might have to park this for a bit until I can read about mounting LHA files unless anyone here as an idea of what could be causing the error above. It's worth mentioning that I'm using another 32GB SD to see if the other was corrupted (I own a few 32's) I have received two Guru Meditation errors when I attempted to boot from the Ram Disk... Both said "Software Failure" but it will reboot the Amiga and I'm able to see the install disk again.

I used SD Card Formatter then used the Windows 10 format tool, and used diskpart to clean the disk in order to get the Amiga to recognize the scsi drive.

After a bit of tinkering I was able to get the scsi drive to get to the partition disk selection again without any errors. However after creating the 2000mb partition the DH0 drive did not appear. I believe this has to be the IDE cable if anything.

@EzdineG, I decided to really dig through MKL's site and see if there was any details about the device he sold me. I realized that you and I have different revision chips. Mine appears to be 426-RI, as seen below:

I tested the different /int2 and /ovr spots and I still couldn't get to post.

Do you know if I have to use a ground wire and solder that to pin 1 on the 86 pin edge side car expansion? I found another member who grounded theirs on a PAL machine. 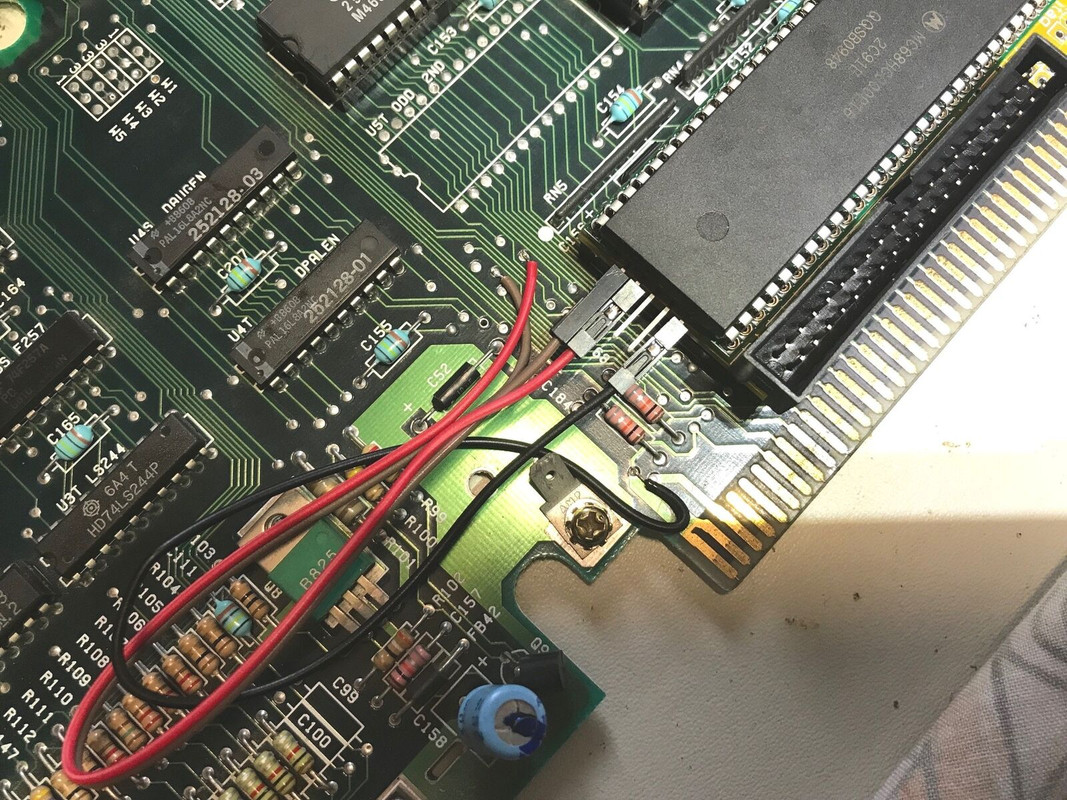 I've gotten the MKL 8M and the IDE68K stack to work on my A1000 some time ago, but I have since reworked the system with an HC533 which has both 8M and IDE, and a faster CPU solution, so I no longer have it the way you are trying for anymore. At the time it was a good system setup. I also had the Insider 1000 (1.5MB) on the CPU socket stack (had to customize the stack to support the height), so I had a 10MB A1000 (512K was Chip)

That said, here is what I recall from then:

I have a ROM Switcher module from Tuxbar86 (AmiBay) wired into the system that lets me pick Kickstart versions - I have 2.05 and 3.1.4. The 256K WCS upper RAM board is not part of the functional system as a result of the ROM adapter. I assume you have a simple ROM adapter replacement for the disk load of Kickstart, and want to use 3.1.4, and have similar mods done to disable the WCS.

The source for the signals the IDE68K uses I grabbed from the nearby VIA holes on the 86-pin edge connector. Use the schematics for an A500 edge for ref (for readability - all A1000 schematics are hand drawn and scanned, but the signals are the same, just harder to read) - Pin 1 is forward (vs rearward on an A500). Keep these 2 lines the IDE 68K needs as short as possible - A1000's can have timing tolerances that vary more than an A500 due to the discrete logic (vs GARY chip in the A500 absorbing most) and also that daughter board can pick up noise - it is popular to run a heavy ground wire from the PSU to all of the PALs' ground pins - Mine has it and I have seen many that also do.

You will need the 8M module in the stack because the A1000 only has 512K native. It plays a trick with AutoConfig in the 68K socket, and may render an external sidecar AutoConfig unable to function, but that is the least of your issues. It doesn't affect the IDE68K as that module is detected as motherboard resources, and not an expansion board. 3.1.4 will boot up to CLU in 1MB RAM with a small HD partition defined, but by the time the OS loads everything for Workbench GUI AND the HD partitions have their needs met, 2MB is a realistic minimum value for a 2-4GB HD in the system.

Use HDToolBox to set up the IDE media with the Install disk. You have to let it read in the disk media info first before going into the partition areas and defining partitions. Set up your first partition for ~500MB, and in advanced, use 4K block size (this is the recommended smallest multiple for all flash media use - FFS or other computer filesystems), and let the rest of the media's space be for now. Reboot on the Install disk and format the partition, using the quick option. Let the installer copy the files to the HD.

Once you get that stable, you can go back in to HDToolBox and add additional partitions, if you need them. Although you can go past 2GB sized partitions with 3.2.4, adding more partitions, and larger ones, consumes more memory. I get by with IDE Flash DOMs of 2-4GB on my systems (with IDE), usually 500MB boot, and a pair of 750MB or 1.75GB partitions.

Note that the IDE68K can't work on native 1.3 or 2.04, as the scsi.device IDE code is not present in then ROM or the soft load Kickstart.

@TheBajaGuy, thank you!! I've had to sadly take a break from tinkering with my AMIGA because of the holidays and some health issues. I'll try this soon and let you know what happens!

Enjoy this topic.. Really looking at all options to upgrade the 1000. I have one at the ready that needs to move forward. The 1mb chip ram is the biggie hurdle among others. Would love to hear more the HC5333 discussed. Thank you

For what it's worth, I used the Classic 520 Accelerator on my A1000 (as it provided a nice upgrade without requiring any hardware modifications) and was able to easily install 3.1.4 to a Compact Flash card.

Do you know of anywhere to download the Classic 520 Flash utility? The Irix Labs website appears to be gone.