Shot97 wrote: ↑
Sat Apr 23, 2022 8:56 pm
Enjoyed the article, good stuff and looks great. U.S Gold was actually a European software house, but you're still correct in recommending people use NTSC for the most part with that company, as their whole "thing" was acting as a European publisher for American designed games when the American publishers did not have a presence in Europe.

Thanks Shot, I'm glad to hear you enjoyed the article. One of your PAL/NTSC comparison videos was one of the reasons I decided to research this topic thoroughly, so thanks for that too

That's some interesting info about U.S. Gold there!

You noted how DOS doubled the lines from 320x200 to 320x400 on a VGA monitor. I don't think I knew that but I wonder if it explains this weird thing I remember from using DOS Fellow and/or DOS UAE. The lowest resolution any of the WinUAE variants (going back to beta) will go to is 640x480, but in its old DOS incarnation there was a 320x200 display mode, and it was awful looking. It always made me wonder "what is it about the Amiga where both systems are using the exact same resolution but I MUST use at least 640x400 as well as thousands of colors (256 colors looked terrible as well) in order for this emulator to even approximate the look of the real thing? It could be more behind that but it's a curious thing I remember, I could probably take some pics of it if anyone is interested in seeing it.

When VGA was introduced, IBM could have supported both 15 kHz and 31 kHz line frequencies, but decided to reduce cost and only support 31 kHz. Backwards compatibility with CGA and EGA screen modes was achieved by simply doubling the vertical resolution, so the 320x200 15 kHz modes became literally 320x400 at 31 kHz. From the point of view of the monitor, "real" 640x400 and 320x200 VGA modes are indistinguishable at the analog signal level.

Btw, in the second instalment of my article series I will tackle IBM PC compatibles, so EGA, VGA, and so on. You'll might find it an interesting read.


Shot97 wrote: ↑
Mon Apr 25, 2022 1:27 pm
It always made me wonder "what is it about the Amiga where both systems are using the exact same resolution but I MUST use at least 640x400 as well as thousands of colors (256 colors looked terrible as well) in order for this emulator to even approximate the look of the real thing?

While I haven't used the early DOS versions of UAE so I cannot make any statements about it, I *can* say with 100% certainty that I was more than a little disappointed at the apparent "blockiness" of 320x200 VGA compared to 320x200/256 Amiga graphics on a similarly sized 14" monitor. I did some pixel gfx in DPaint back in the day, and my images didn't quite look right on my new VGA PC, something was off. I finally understood the technical reasons for that only about a year ago; it's quite fascinating, really.

But most definitely, 320x200 line-doubled on a VGA adapter cannot faithfully simulate the non-line-doubled output of the Amiga. I'm guessing in the recommended 640x400 resolution they blanked every second line, which was a lot more faithful albeit a bit too sharp compared to a C= 1084S (VGA monitors had much higher resolution, there was far less "blending" between the scanlines).

Entirely subjectively, 640x480 with 256+ colours was the "cutoff point" for me where PCs had finally surpassed the graphics of the Amiga.

I wonder if a flicker-fixer would have the same effect on an Amiga, or maybe it would leave the low-res modes intact? Hmm, I guess it would line-double even at low-res, because the whole point was to be able to use cheap VGA monitors instead of expensive multi-sync ones, and VGA only supported 31 kHz.

I use a scan doubler for my Amiga, connecting it to a Gateway Vivitron CRT monitor at 60 hz, the doubler is used to increase the frequency, but I have multiple choices on what resolution to use. I can still use 320x200, or 640x400, even 800x600. I don't like the look of its VGA mode, although I will use it for PAL stuff because then I can have separate monitor settings for each resolution. In VGA mode I have it stretched to look right in PAL mode, in XGA I change it depending on the game, but often use it for overscan games, and 800x600 is what I use for NTSC stuff. Personally I love the way it looks in the higher resolutions, although if I still had my Commodore monitor I'd probably use that. We actually used a 1960 monitor after our 1084 died , the 1960 was a VGA monitor I believe. It just needed a little adapter to work, and I remember that one looking awesome back in the day.

My DOS computer uses a Dell (Sony) Trinitron CRT, and while I do enjoy its VGA DOS look, it's still never quite the same to me as the Amiga, even using PC monitors for both systems. But the emulator is doing something much different, I can play Monkey Island in DOS and it looks fine, but if I played it on DOS UAE in 320x200 resolution at 256 colors it would look so awful. It always made me wonder what was it about the colors that DOS couldn't handle the Amiga's 16/32 with its 256 color mode? Yeah, I'll try to show it off sometime, it's positively ancient but it brings me back to the late 90's when I was trying to bring back the Amiga for the first time. 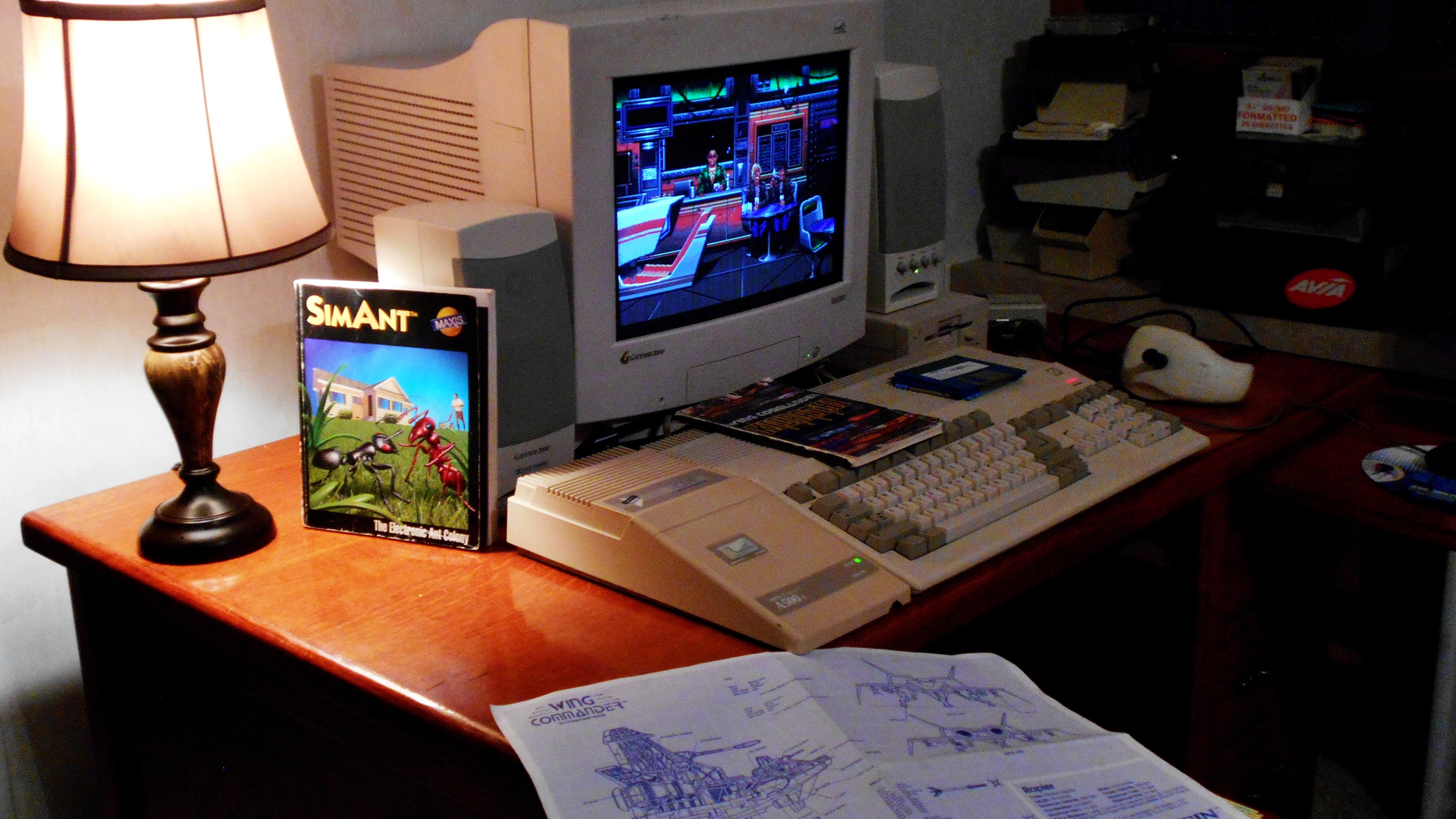 VS Back in the day setup (flash obscures the screen, but my dad is playing Railroad Tycoon if you look close) 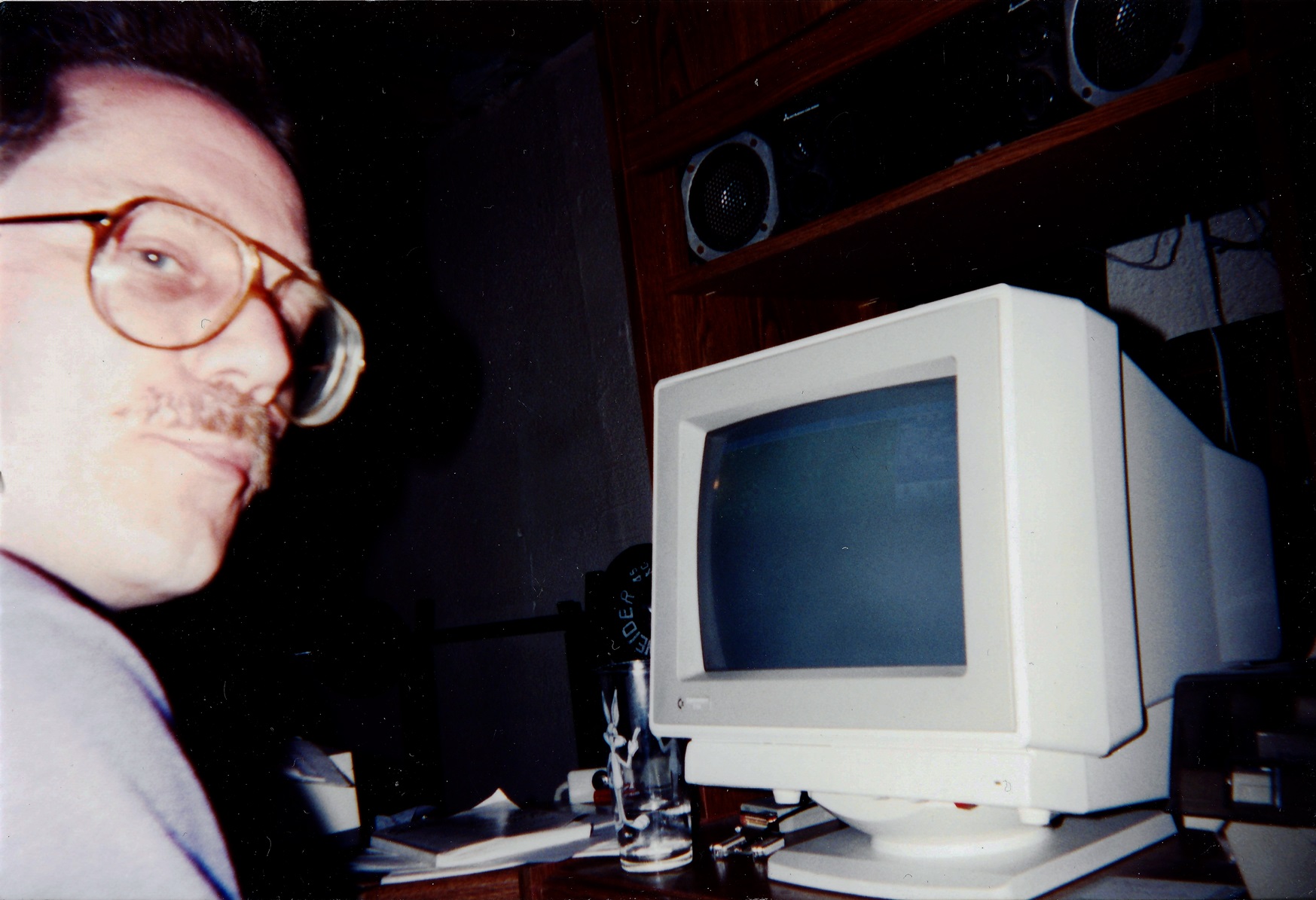 From Amiga PAL/NTSC modes to VGA... that's only one step up from extremely obsolete to just plain very obsolete...

VGA is just too limited to faithfully recreate the limits of the Amiga.

Around 1992/1993 I traded in my A500 for a 3000 and a 1200. I really liked the 640x512 flicker-free resolutions for productivity. They look very different from 640x256, and I found the complete color fill with no tiny black lines an amazing advance. But only in those high resolutions. Doubling 320x2xx resolution games, not so much.

Fortunately, today's high resolution 4K monitors can handle both well. I now use either 720x540 multiscan productivity or flickerfixed 960x540 PAL superhires, which my HD monitor then doubles or 4K monitor quadruples. This is with the Indivision AGA MK3. For non-interlace PAL resolutions the Indivision darkens the second copy of each line so I get the rasterline effect to avoid the excessive blockiness you also get with those resolutions converted to VGA. (Still working on the best solution for NTSC, as there is no nice multiplier for 200 lines + an appropriate amount of overscan to 1080 lines.)

While doing some research for an article, I came across this interesting bit of information. Thought you people would like it as well. It is from Charles Poynton, an engineer with a long history in the television fields amongst other things.

After dozens of hours of further obsessive tweaking, I've updated the article with revised shader presets that achieve a shaper and more vivid look that's more faithful to the old Amiga monitors. Open the image in a new tab; they need to be viewed at 100% magnification with 1:1 pixel mapping. 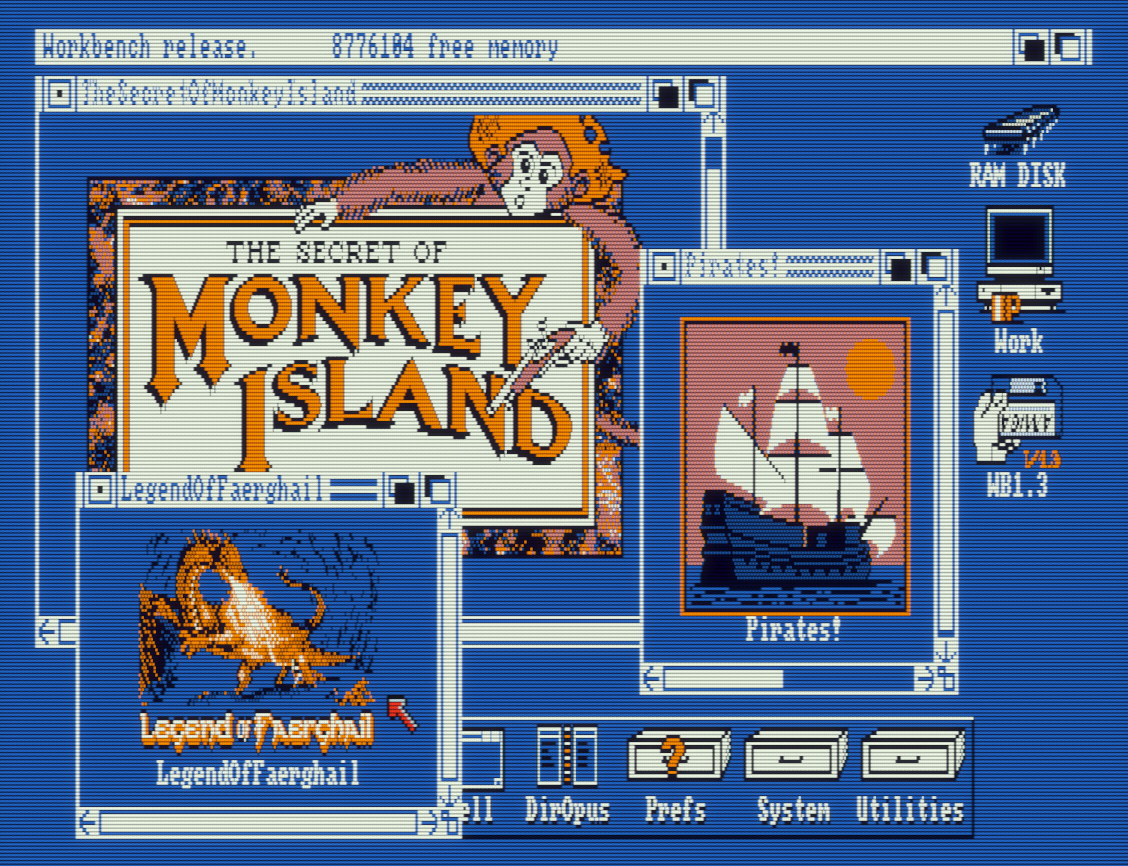 Now with 100% more Legend of Faerghail, Knightmare, and Perihelion screenshots!

I'm very happy with the results, the first attempt resulted in a slightly blurry image, now the image is a bit sharper but still retains those nice CRT characteristics we all love. 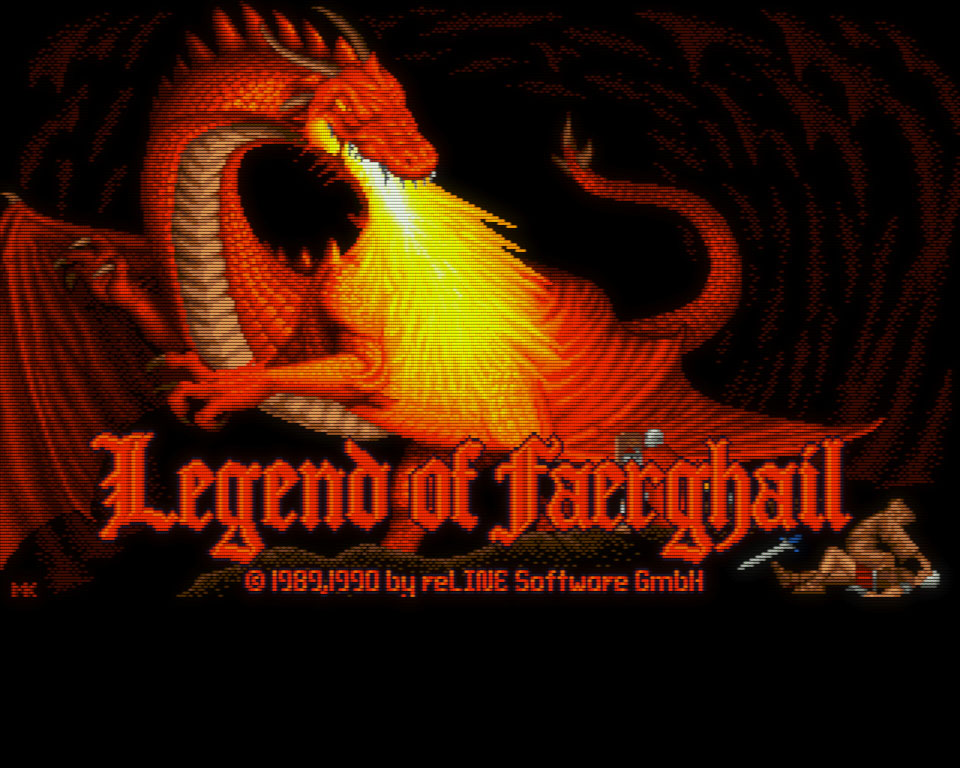 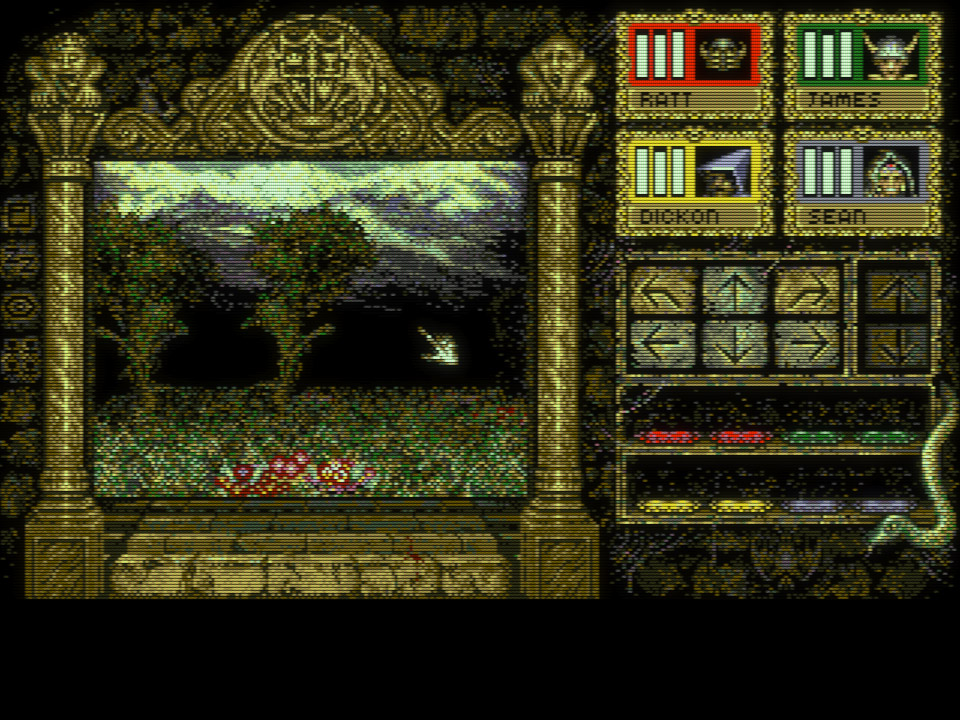 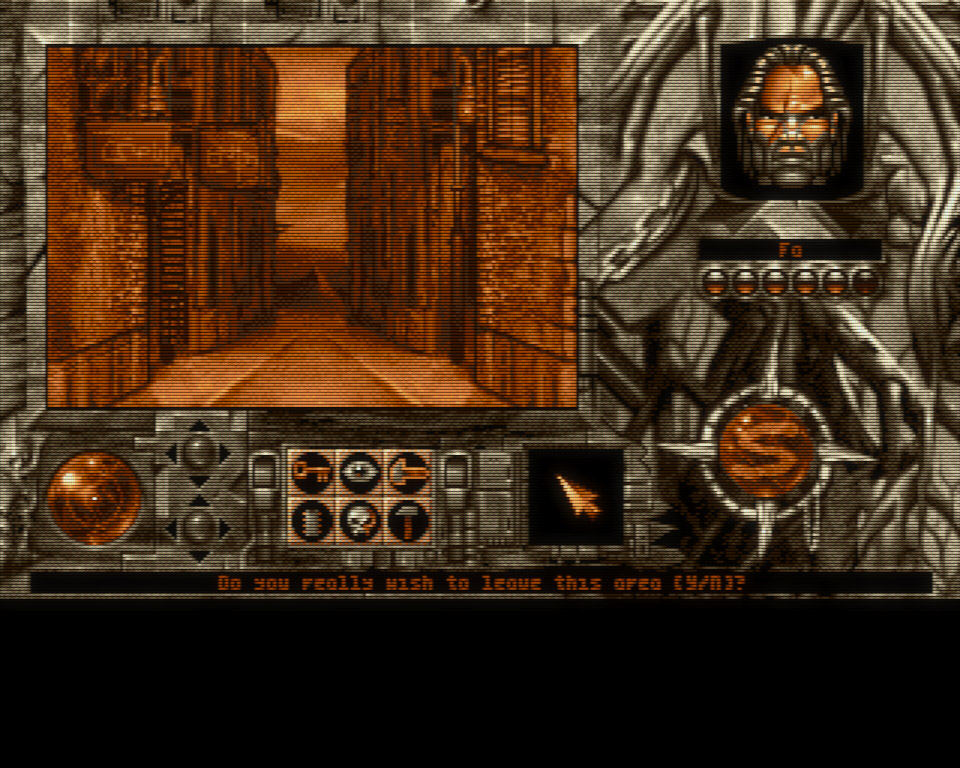 Awesome read.
I didn’t understand everything but it was super interesting.

I love it how your mind constructs pictures from visual patterns.

Yeah I really love this saying: I prefer radio to TV because the pictures are better

Low-res graphics fire up my imagination a lot more than all these real-time ray-traced 4k ultra realistic hi-def whatever wonders of today (where "gameplay" mainly boils down to following the GPS, in a nutshell).
Post Reply
19 posts