A couple of months ago I acquired what I believed to be one of the only publicly-known copies of Ultima VI: The False Prophet in NTSC format for the Amiga. It took me a long time to find it. Obviously, Ultima in all of its incarnations was designed and developed in the USA by Origin, in Austin, Texas, and originally shipped on PC DOS in 1990. The Amiga port would arrive two years later.

The release of the Amiga version of Ultima VI is weird.

It was released in both the EU (ported in the UK) as well as the USA. All of the ADFs (Amiga Disk Files) online today are the UK/PAL version. If you try and install that game on an NTSC machine's hard drive, you will be able to watch the epic intro animation and even create a character. All of the artwork is NTSC-based and looks to be directly lifted from the NTSC MS-DOS version. But as soon as you try to play the game you’ll be confronted with a region block. This is pretty stunning, as all of the art is obviously ported from NTSC art and animation so the region block is strange to say the least. It's essentially a very light-handed attempt at copy protection.

Here in the US, however - the place the game was created - the ADFs were nowhere to be found.

As I mentioned before, two months ago I found and acquired (after a very, very long search) the only NTSC boxed copy of Ultima VI I’d ever seen and greedily began to install it. Unfortunately, the Install disk was corrupted from age, and was even potentially damaged by the original owner when he tested it before shipping after sitting in a box for several years. For him, it worked fine. But that test apparently killed a few tracks on the disk preventing it from installing.

I was able to install most of it but hit an impassible Read/Write error near the end of the Install disk. Not ready to give up, I discovered a disk recovery program written by Amiga legend Dave Haynie that I then learned to use to try and salvage the Install Disk’s data. This program allowed me to move most of the data intact to a new disk.

I then compared the PAL version to the NTSC version, file-by-file. I was able to determine that only a few files had differences based on byte sizes, and over-wrote a functioning PAL install with my new NTSC files. It worked! I, and some of my friends, were elated.

After hearing half of “the scene” explode in vigorous applause and the other half tell me everything I did wrong (it can be so thankless sometimes with the finger-wagging), I personally was happy to have successfully identified and removed the region blocks on the NTSC version regardless of my methods. I created a downloadable package anyone could use to install Ultima VI to their NTSC Amiga when using the PAL version. I’m not a hacker, but I hacked it, yo!

The Quest Never Ended, and the True Prize Finally Found

My Ultimate goal was to find an undamaged and original NTSC Install disk and create an ADF of it for everyone to enjoy in the land in whence the game originated with original hardware. I recognized not everyone would be willing to copy the files I identified and isolated on top of PAL installs. Work is work. It’s gotta be as frictionless an on-ramp as possible, right 2019? It took me ages to find the game to begin with, but I decided to keep my search active in the background.

Incredibly, insanely, improbably… just 4 weeks after my initial revelation, I found a new NTSC Install disk! And it was only $40! At that price, I didn't even have to weigh if the risky purchase was worth the investment. I instantly bought it.

However, the day the box arrived I became completely engulfed in a different project preventing me from coming up for air and focusing on this new highly coveted prize.

THE INSTALL DISK IS PERFECT! All three of the disks are perfect. They are 100% NTSC and installed flawlessly to my machine's hard drive.

 
I've created the ADFs. (there is no copy protection, because the game relies on words in the manual to be typed in instead - thank goodness!)

And I've confirmed that the ADFs that I created work.

As of right now, this very second, NTSC Ultima VI (6) is 100% available for download. I have not “cracked” them or tried to insert my ego onto these disks in any way shape or form. They are 100% identical to the original disks, and ready for the community to enjoy (if you love them, and think they should be submitted to some organization in a different format - go for it!).

Please download them, share them, and enjoy them. I know I will! But I need to play and finish Ultima V first.

Just like all of the Ultimas, the journey is long and convoluted. But the sense of accomplishment is what it's all about in the end.

ADF Downloads
You will be able to find these downloads in the Games Library after the game has been played and reviewed (which will be some time from now).

Technical Notes
Once you move the ADFs to floppy disk, the Install Disk must be booted in order to start the installation process. Simply putting the disk in your drive with Workbench running won't do anything. Boot from the Install disk.

I most recently installed the game to my stock 16Mhz A3000 (running 1.3 and 2.0) with 16MB Fast, 2MB Chip. I had previously installed the game on my beefed up 40Mhz A2000 with similar stats. The game does seem to respond better on the 32-bit bus of the A3000. But it plays fine on both. I've not tried it on a stock 1000 or 500, but as long as you have 1MB RAM you should be good to go. Playing it on the 1000 might be a stretch but worth checking out. I loved playing Ultima IV on my 1000. Worth noting that Ultima VI uses a completely different game engine, so the requirements are not 1:1.

Please remember that you'll need to use the Compendium to get past certain conversations in the game in order to progress. It was the only means of copy protection added - and this is not a cracked game. It's 100% original and untouched.

For historical accuracy, shipped in 1992, a rather good year for NTSC Amiga games. '93 would see some classics itself, like Civilization. 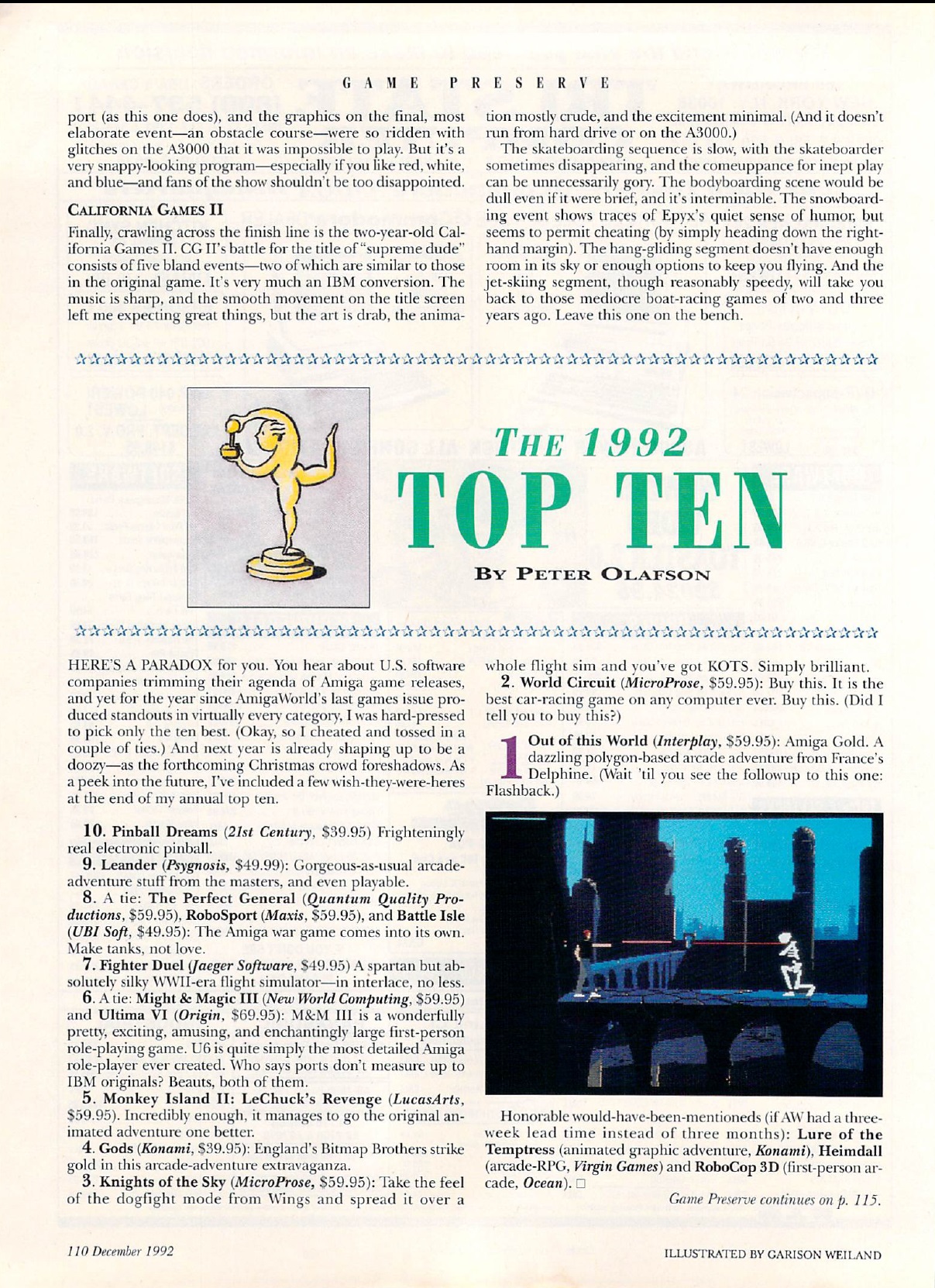 I'd be very curious to see how this game plays on your A500, Shot, if you decide to install it.


The Amiga version was itself ported from the PC and due to a lack of reprogramming it was very slow and generally considered unplayable without accelerator card on a first- or second-generation Amiga.

I mean I've already covered the other 6th best game of that year (and the first and 2nd for that matter), haha. I mean if World Circuit doesn't bother me in slowness, I'm doubting Ultima 6 will. You people and your accelerators, you've lost all patience :p haha It has been downloaded.

Oh, that quote was from Wikipedia. I have no idea who wrote that.

You have no idea how much I loathe wikipedia when it comes to Amiga information.

Yeah, it's pretty hit or miss. Now I have to try and hunt down where I got that (apparently bogus) date. I seem to be off by a year. Hm...

UPDATE:
Date repairs made to the OP.

If there is a slowness issue, might be just like World Circuit, actually. In where the European magazines, playing in PAL mode, mentioned how awful it was on a stock 500 over and over again... In America on NTSC hardware, and I still remember most of this quote "Speed not to be believed, even on an unaccelerated 500!" - And that's just it, anything designed for NTSC is at the very least 10 seconds slower per minute on PAL hardware, 10 minutes per hour, etc...

Of course Might and Magic III was actually slower than World Circuit was... But I still got through it fine. That clock speed does more for the speed than people realize, even accelerators in PAL land are missing out.

I must state very clearly I have no idea if this is true, but I read somewhere that if this game was played off of floppies on an A500, the machine would try to seek and load data after every step your party would make. I've no clue if that person was playing it on a PAL machine or not (or which copy of the game they had).

If that's actually true, this game might actually push you to your limits. That being said, I know you'd install to HDD anyway.

But I'm 99% sure the game is using NTSC artwork across both versions. It looks perfect on the NTSC boxes, and I've installed both PAL and NTSC. No difference in visuals at all. Not to mention if you compare the disks side by side (which I've done) none of the art files are different.

I may have to try that experiment on a first-gen un-accelerated Amiga just to see for curiosity's sake.

Oh, well... One floppy disk Hillsfar and Uninvited pushed me to my limits when it came to disk loading, making me figure out strange ways to put both of those (without install programs) onto my hard drive. Hard drive; best investment ever made for my 500. But I was long considering the drive having grown impatient with floppy loading. I've still only come across one single Amiga game that "almost" makes me want an accelerator... that's Wing Commander, and you know I can get through that one just fine as well. lol.
Post Reply
25 posts