Air Mail Amiga game
You are part of the air mail service that flies through Central Africa. In the middle of it was a routine flight, a flock of birds hit your plane and it enters a total power loss failure. You plan to avoid falling, you lighten the weight by throwing your load, but you end up crashing into the jungle. Once you have recovered from the accident, you get going. You must get the letters and packages you have lost along the way, all while searching for a route to return to civilization. 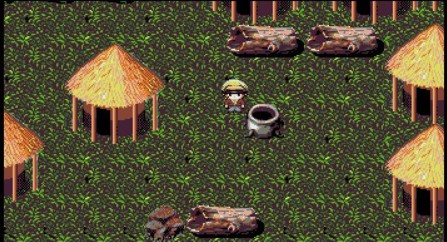 As you explore the jungle jungle you realize that you are not alone, this jungle is inhabited by hostile tribes, traps and fauna, very dangerous fauna.

Try not to end up as a main dish for piranhas or in a cannibal's pot.

This adventure has several endings, at a certain point you can choose to continue the adventure or go home.
To be able to continue you will have to recover the packages and the cards that have been scattered by the jungle.


Sometimes it is worth running away from the local fauna before using your revolver with them ...
Be careful with your orientation, the jungle and its wetlands are real mazes.

history before its creation
This game was designed in 2012. It was the first game I designed in my recent time with the Amiga as a hobby. It was intended to be programmed. After thinking about what kind of game I would like to do, I declined for some adventure. We all like those movies that we used to come at the homes of little explorers, Tarzan and the lost world. I was also very influenced by one of my favorite games, Where Time stood still. I think you could say that this game is a kind of tribute over distances, of course ... The game was designed, to be done in Amiga, programmed in Blizt basic.
Either way, this game did not get programmed and was forgotten for years.

One day looking at game folders I saw something about this game and I remembered that it had some designed things, I was missing others so I contacted the old programmer who kindly provided me with something else and with all this I left it again in a pending folder for when I had time to start creating this game.
Free time has unfortunately come with the state of alarm, so with the inability to go to work I started to keep myself busy and that's how this project got underway. Lots of sketches for the characters and a lot of work for the scenarios. 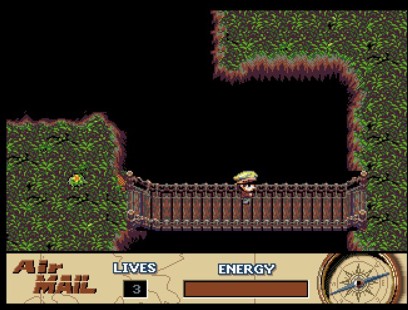 The weeks go by and the game matures and changes little by little, the different levels are completed until they reach 5 levels, with their own holography and mazes. A lost world where you can live your own adventure with this adventurous pilot.
Why make this game? Well, because it was always a great game and it deserved to see the light. It is true that he deserved much more deployment, a couple of programmers and much more deployment, but luckily that lack is solved with a lot of work and a lot of imagination. 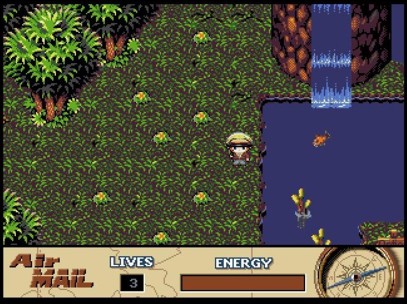 Development
For the development of this game apart from a few sketches on paper I have used the deluxe paint V to create the settings and the characters. I have used a palette of 16 colors that although somewhat short allows the game to go a little better in speed. I have used two sets of tiles to create the 5 maps. There is a bank of sounds created with protracker 2 At this point I want to thank Toni Galvéz for his advice, thanks to him I have been able to reduce the size of the samples and therefore include more sounds in the game. The game is completed with end and intro screens ...