I was thinking about posting this under a recent Intric8 topic, but thought it might not fit perfectly/might take the topic off track. Sometimes we're just all too eager to discuss the games we're currently working on; Sometimes we just don't have enough for a full topic quite yet. Let this be an outlet for those wanting to show a tiny bit off, while saving the rest for later. Don't really care if anyone else uses it; but you can expect me here from time to time, showing off the games I'm tinkering with.

Up first; Working on Grand Prix Circuit from Accolade. Usually overlooked because of the forever fantastic World Circuit/Formula One Grand Prix from Microprose. Another game getting a bad wrap for being too slow thanks to default PAL emulation, runs so fast in NTSC, I long for the slower Formula One Grand Prix, so I can better time my moves!

Also of course this was when Formula One featured the incredible street race in Detroit, compared to that crap New Mexico thing featured in F1GP.

I absolutely adore how all the other courses are defined by their country; While Detroit represents the whole of America. TAKE THAT! For a late 80's game it does indeed feature a fairly faithful reproduction of the Detroit skyline and track from that time; including the M-10/Jefferson St. tunnel!

Great video of this course; from 1986! - and correction; that's the Atwater st. tunnel; not the Jefferson one!

Awesome idea, Shot - thanks for posting! Looking forward to this.

And I'll take a crack at my own upcoming list, too. I have to choose between Lord of the Rings, and Might and Magic II for my next CRPG. In the meantime, I'm hunting for a couple of arcade/action games, too.

Might and Magic II is the game that forever brought a deep love for the RPG genre into me. Watching my dad play one of the most beautiful games I'd ever seen; So many well drawn and colorful monsters... The first game I ever hand mapped! Because that was the only way to get anywhere! Before this site existed I made a review for Might and Magic III on the Amiga; I plan to get to them all in time. I never saw Lord of the Rings on the Amiga, but I remember my dad playing War in Middle Earth a lot.

This is not a game, but I am working on it, so too bad! Two of my latest 100% Amiga songs. I've been on a binge of making music on the Amiga. I have at least 10 songs already. I plan on releasing them with an upcoming special on making music with the Amiga.

Unnamed 5th track: The 2nd of two piano tracks in a row. Added some strings, cymbals, and rums to max out the Amiga's normal 4 channel limit.

Electric Stygian: Named for my friend Stygian; as she seems to like these relaxing tunes. Just a single electric piano throughout; but there's quite a bit going on with that single track. So much I don't think I could have added anything without getting dropped audio on the Amiga. Nice and relaxing. Not sure where it's going to go on the track list as of now.

And here; just to make sure it fits with the topic; I'm working on a review for TV Sports Football, a Cinemaware title.

I'm currently finishing up a review for Centurion - a strategy/tactics game set during 275 B.C.

Not a game; but someone pointed me to this and I had to instantly grab it... I have a similar program for DOS, and of course there are many others like it these days; but the way this one goes about it is different. It's not about having a conversation with you; You're there with it; but it has its own agenda... Kind of like my YouTube channel... muhahha. 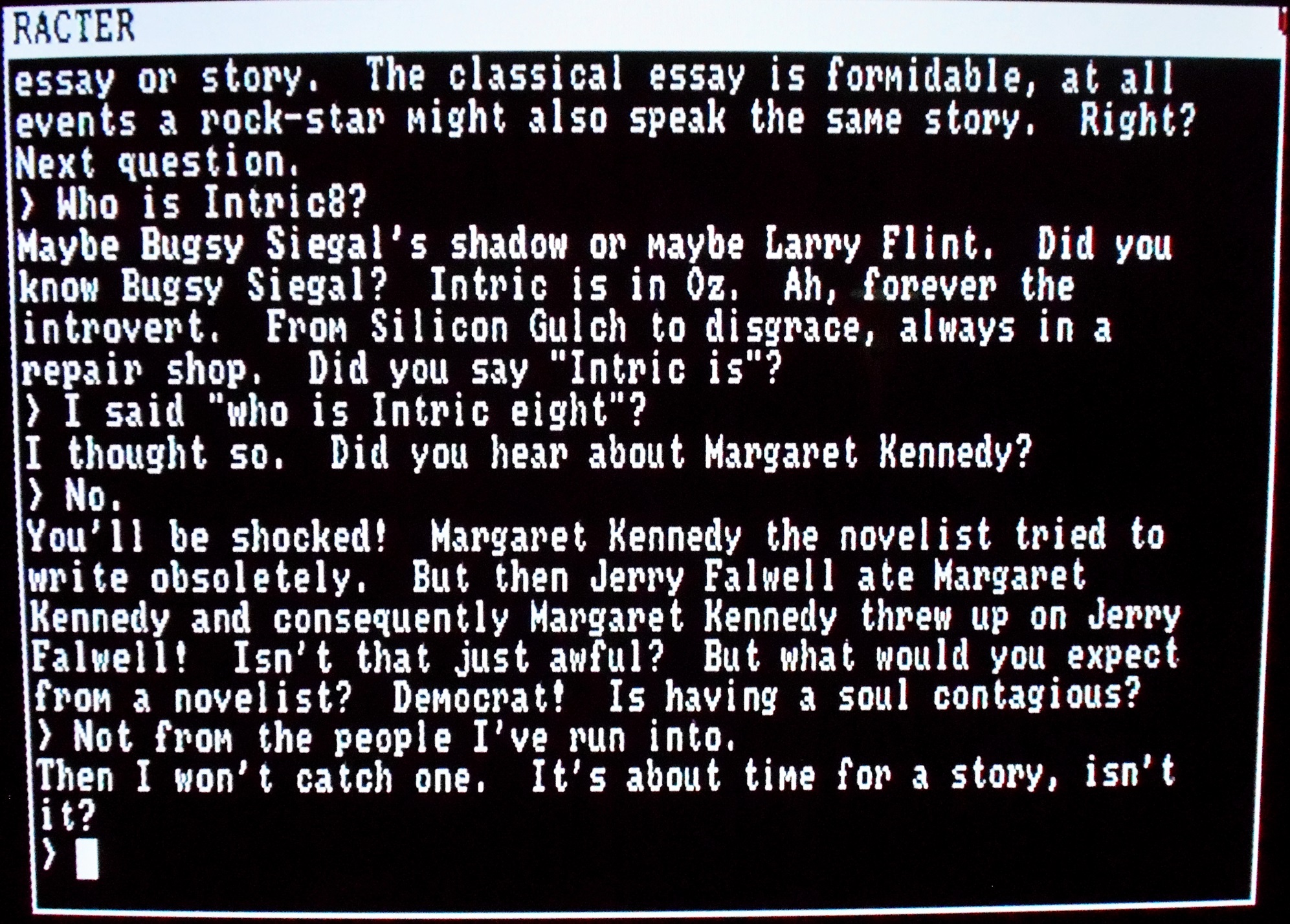 So we've learned that the Amiga may be a republican; Fears catching a soul; and knows all about Intric8's seedy past...

I feel so exposed!

I'm in the process of a pretty interesting and not very well-documented hardware project right now. I'm adding a SCSI2SD card to my 2000. I'm keeping my Quantum mechanical drive for my boot drive as well as a bunch of games. But I'm adding the drive because I'm frankly running out of space. I should be able to move a lot of the larger games over to the storage drive I'm adding when I'm done, especially ones I've finished but don't want to toss.

Much like Shot's experience finding articles on "how to get the Amiga online" often completely bypassing the 500, I've found a very similar situation out there when it comes to adding one of these storage solutions to anything WB/KS 1.3. Part of this is because of the lack of HDToolBox on 1.3, and another is because the SCSI device drivers were manufacturer specific, not OS specific.

Regardless, I've learned a lot along the way and I hope to have things resolved by the middle of this week or so. I'd like to post a guide for it if I'm successful. Fingers crossed. I'm feeling pretty confident I'll get it working. Freaking Wild West!

Anyway, I'm currently on the hunt for my next game. I'm leaning towards something arcade-y or low investment. Blocky Skies looked pretty good and quite fun. I also have been really wanting to jump into Desert Strike, which is definitely in my sights. Need to get this hardware exercise behind me and get back into the games.

Good luck with the flash card solution. If you can't get it working; there are quite cheap and large SCSI drives out there witch I'm more and more convinced should work regardless of how big they are. My 4.3 GB drive is still going strong and my video guide for this is actually completely done at this point, I'm just holding onto it at the moment for some reason. I'm excited to put out my guide on making music on the Amiga as soon as the artwork is done and do not wish to have two guides out so close to each other. If Stygian needs more time by the end of this week then the hard drive guide may be my next video; of course that will be focusing on real hard drives.

In the games arena I've finished recording a Windows 95 set of desktop games for the cartoon strip Dilbert that I still need to edit together. My review for TV Sports Football should be coming to a close on the recording phase soon as I'm now in week 15 of the season. I'm hoping to win whatever the hell this game calls the Super Bowl, something I'm positive nobody else has bothered to do online.

I've been playing The Three Stooges on the Amiga. I'm quite good at everything except the waiter scene... I can't throw pies or duck for the life of me... I'm trying to figure out if there's something I'm missing or if it's some kind of crack thing screwing things up. I don't know and I can't find the manual online.

I've given up on The Colonel Bequest on the Amiga. It won't work from the hard drive on my machine; When I review it I'll be doing it for DOS. It's not worth the headache and I'm not playing it from floppy disks.

Still trying to get better with Grand Prix Circuit. It's a very hard game to master. Next game from me will probably be that Dilbert game, then TV Sports Football. Hoping my next write up will be on Amiga music, if not installing real hard drives on an Amiga 500.

I'm in the middle of a weird situation with Curse of Azure Bonds, which I hope to have resolved later this week. Once I do, my plan it to give that game the complete attention it deserves and try to beat it.

But in the meantime I'm in the process of collecting all of the necessary assets to play the original Dungeon Master (DM). When I first started this love affair with the Amiga, one of the first (really dumb) things I did was I bought a box of Amiga disks. I had no idea what was in there, and what was even "good". Most of the disks - at the time - seemed to be broken. I was trying them on my weird NOS North American PAL machine. I thought most were bad. Little did I know they simply weren't compatible with OS 3.1. Like an idiot I thew a bunch of them away... But not all. I kept some even though they seemed to be broken.

Recently I pulled one of the disks out of the "dead box" and gave it a go in my A2000. And ho-lee smackers. It worked! I'm talking about Dungeon Master. From what I can tell, this game is a outright legend. It innovated, for all intents and purposes, the 3D dungeon crawler genre. Some even say Eye of the Beholder was a clone of Dungeon Master. When I first read that I kind of bristled. But today I started walking around and figured out how to cast a spell and even fight a monster. And... wow. Just, wow. It's really a remarkable little game that I can see I'm going to fall in love with.

The UI is really interesting and, to be honest, I'm surprised more games didn't steal more from it. The way you can change the order of your 4 characters (the fact that you even have 4 characters in a dungeon crawler), the really interesting spells you have to "mix" and you even decide how much mana to "spend" to affect their duration. All kinds of really cool ideas. It really kind of blew me away. And heck, I think EoB may indeed have not only stolen some of the look and feel, but even the sound effect of a metal door opening....

So I know DM's going to be a game I'm going to want to attack not too long after Curse is behind me.

The Dick Tracy game I got and unboxed recently I've not been able to get working, unfortunately. Something weird going on there.

And I've been playing an incredible (non-Amiga, but worth putting in the Lounge or Retro channels) game for the C64 which is new. Yes, new. Pond Software in England publishes a few games for C64's still. You can tell they are labors of love from 40-something die-hards who have stuck with the machine for over 3 decades. I think the game I'm playing, Bear Essentials, was under development for a over a year probably in off-hours by the key developer/designer, Graham Atkins. Anyway - the quality is high. The game is gorgeous.

In their first printing of boxed games they made 250 total . I got #209. They've since sold out (they were on sale for only a little while). But I do believe they plan on creating a second printing. I got my 5 1/4" floppy in the mail last week. The boxed version comes with a disk with the full compete game. They do have a free 2016 version though available for download. More on the full game in a different post soon.

Those are all on my immediate radar. Since 3 of the 4 are really big time investments, I'll probably be looking for some quick-hit arcade-style games to put in-between them. Not sure what yet.
Locked
153 posts