One other thing I figured out on my own out of pure luck - how to PAUSE the damned game!

There is no explicit pause. Which is insane. There are times I've had to run from the computer to answer the phone or some other reason only to come back and discover endless days (moves) had gone by. Had I been poisoned during one of those times, it would have killed me.

Anyway, (spoiler? I think not) I discovered that if I went to my character's stats and tapped over to page 2 (not page one!) the game would sit there and wait for my next keystroke. And time stands still. This was huge!!!

It also appears that in some cases (I haven't studied the exact pattern) you can kind of pause the game if you're in the midst of talking to certain NPCs, like Lord British. Sort of handy, but the 2nd-page of stats pause is way more practical.

There really should have been a true pause...

Ahh Ultima! Some of my favorite games in the C64 era. III was the first I played and I remember going in half with a friend to get IV when it was released. I only glanced at it when I got my Amiga since by that time (1988) I had already finished I-V. It was a bummer the Amiga versions usually trailed behind by a year or more.

Now I might want to replay them on the Amiga. Nice copy.

It was a bummer the Amiga versions usually trailed behind by a year or more.

So, yeah, it was kind of old news to some by the time Amiga got it, It rather looks a lot like its 8-bit brothers and sisters. But I personally don't mind that at all. Keeps to its original charm IMO. From what I've read, it was ported by a single guy - "Banjo Bob" - which was surely no small task. The game isn't filled with graphics, but it is pretty vast. Lots to convert and test. Can you imagine the testing process this game would have required? Weeks...

They are for sure more colorful then the 64 version and the music is good on the Amiga version too. I like it for what it is. The SID versions are what I heard first but I also like the Amiga versions.

Oh yeah, you are right. They were ported much later then the 64 version. That makes sense though, since the Amiga wasn't out yet when the first IV were released. I had an A500 when U5 was released but I played it on a C64 because the Amiga version wasn't done yet but it did come out the next year. Great games.

Heh great progress! I remember going through all of this as well. For me it gives me find memories

Regarding the hidden doors in the wall there is a visual hint! If you know where a hidden door is look closely at that wall square.

Minor hints:
- there are also hidden doors in some castles.
- the moon gates operate depending on the phases of both moons! If you learn how they speed up travel significantly.

@McTrinsic, I figured out where you got your handle from last night.

Well I can't deny that there is a connection

So I found two books. One is from COMPUTE! Books (which published a fantastic magazine in the USA, too) printed in 1990. The other is by Prima Publishing and was published in 1992. Both are long out of print and were quite pricey. But in the early stages of getting my bearings, I was pretty desperate. I only just last night finally figured out the moon gates...

Anyway, they both try to cover Ultima IV-VI. And as I mentioned before, they are both in long-form narrative formats and read like novels.

The first one - the "official book" - has the first 90 pages devoted to the history of Richard Garriott and the design and development of the games. It's essentially a historical biography and history book. Then it goes specifically into the design and development of Ultima VI, which would have been brand new in 1990. And at the very end there are some "solutions" for IV-VI (still in narrative form) and a table of the Moongates and some of the items one can/must find throughout the land. It took me WAY too long to understand how to use the Moongates, but I finally did figure it out. Why they didn't reveal more of this information in-game is baffling to me and must have been beyond frustrating for the average gamer. Even with the table in front of me it took me several minutes of study to understand things.

In any case, the larger purple book covers the same 3 games. This is really cool for Amiga folks, since these are the 3 of the 4 Ultimas we have at our disposal.

This book is also very heavily written in narrative form. It does have a couple of pages of maps but they aren't exactly what I'd call highly detailed or easy to read. There is an excellent page in the book, however, that helps further illustrate the phases of the moon and the Moongates, which I used in conjunction with the other book. Hah!

I also found the Sextant last night (why did they hide it like that??) and it took me another several minutes of head scratching and experimentation to figure out the bizarre coordinate system in the game.

Definitely requires a lot of study.

nice books. I have these at hand, I have others in my pile (I was a big time hint book collector many years ago, most Ive sold on.) just not at hand. The U6 hint book has an extra paper insert just for the C64 version which is kinda neat. 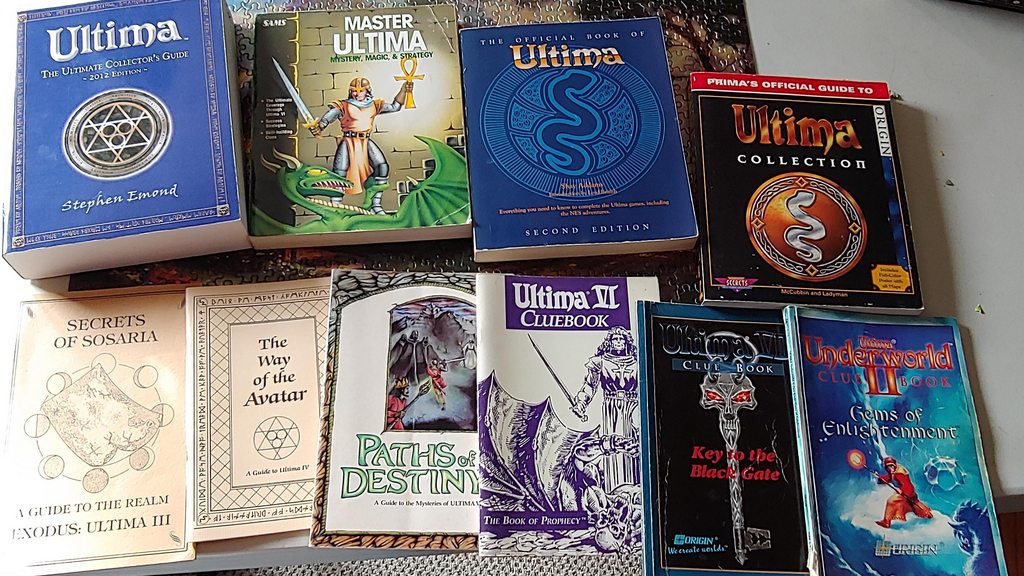 The official book devotes a history to the self titled Lord British? Ya know, with him? It actually has always made me smile for some reason, it's how you present yourself, but damn does that man love himself.
Locked
153 posts