I have a vague memory of an Amiga game from my youth. In some ways it was quite unique. I wonder if any of you guys can remember the name and perhaps help me to find it again...

The date would have been late 1991 or early 1992 I think. The game was actually 3-D. The 3-D effect was achieved by the old school red / blue glasses. The game itself was very simple / spartan. Graphics were monochrome. White ( actually red / blue ) vector graphics on a black background. Game-play centered around controlling a bike with the mouse. Left button to accelerate and Right to brake. Moving the mouse would cause the bike to lean and turn in that direction. This was necessary for the corners. I cannot remember very much in the way of obstacles or other road users.

I do remember that the game felt incredibly smooth and responsive and also that the 3-D effect worked surprisingly well on my Amiga 1500 and Philips CM 8833mk2 Monitor. I think the object of the game was to complete the course within a time-limit. In some ways, it was a tech-demo of the 3-D engine.

This was not a big box / Triple A game. I think it was on an Amiga magazine coverdisk, also including the 3-D glasses in the magazine too. I used to read Amiga Format and initially I thought that it might have been included as an Amiga Format cover disk. However, having looked though archives of Amiga Format, I cannot find it.

I also got the legendary synth based album "Violator" by Depeche Mode at the same time. So for me, this album is the soundtrack of the game.

In fact, I don't think there was any soundtrack for the game at all, it was completely silent IIRC. I have many happy memories of playing this game and listening to this album. The black visuals of the game matched the black feeling of the album perfectly.

Does anyone else remember playing this game? I hope I did not imagine it.

You must be thinking of 3D-Motorrad. 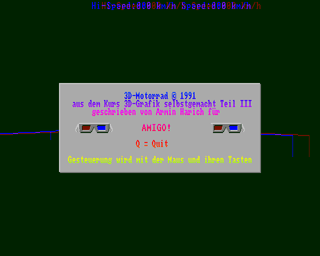 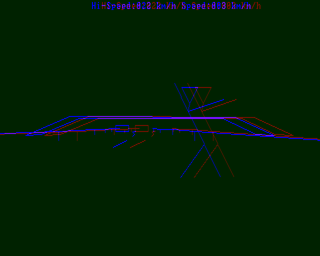 Yes - that was the game.

Thank you so much for your help. Now I will try to download it from somewhere.