Retro-gaming Enthusiasts Are Getting It All Wrong

Unfortunately, the monitor I have doesn't do this when you connect a retro PC through VGA. It has the usual scaling artefacts like any other LCD monitor

I am on the lookout for a proper old-school 1600 x 1200 LCD, to see if they do nice integer scaling like DOSBox / Windows can do.

I took some photos from Wing Commander on my CRT. click on the thumbnails for full size.

Shot97, can you share your savegame for that Monkey Island scene? I'd like to take a photo of that also.

The monitor I have is quite worn out. Brightness and contrast is almost set to max, but the picture is still a bit dull. Hopefully it lasts long enough for me to get all the footage for some videos 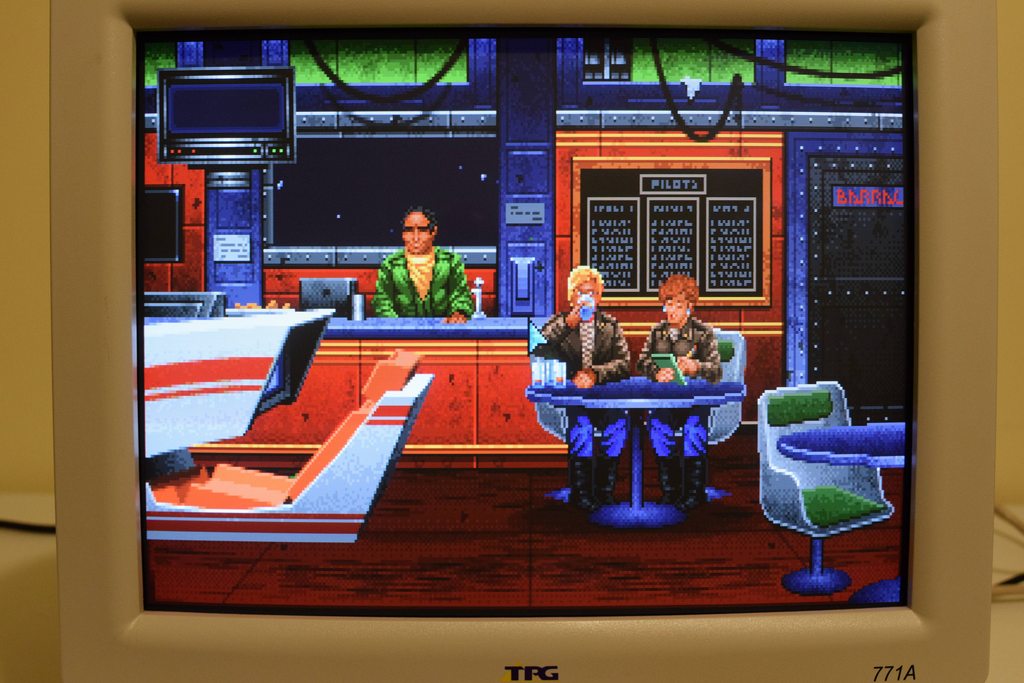 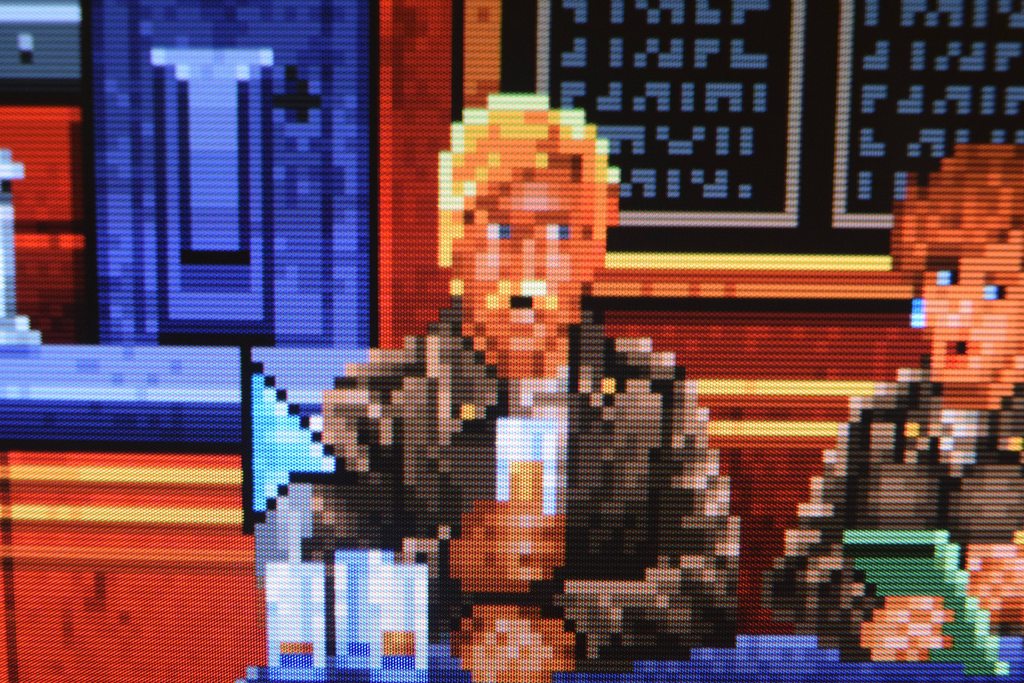 Shot97 wrote:This is called the 5/6 method. I want to talk about it just in case one of these people has something negative to say here. In this method you take your 320x200 1:1 distorted crap picture and you use your paint program of choice to enlarge the width of the pic by 5 and the height by 6. This makes it a 1600x1200 picture which is 4:3 - Due to that being incredibly large you can then take the picture and resize it to 640x480 or your 4:3 choice.

Shot97 wrote:The guy I based that post on is still wrong, but so was I. Meanwhile, Phil had it right! Turns out enlarging a 320x200 picture to 1600x1200 matches just about perfectly with my CRT picture from what I can see. However, Phil is also right when he says resizing that picture into a lower resolution does not make sense.

Hi, I'm "the guy" who wrote the Gamasutra article where apparently you first saw the "5x6 method".

I'd just like to point out that you misread what I wrote.

The "then resize it to 640x480" part is a whole separate issue. A 1600x1200 image is unpractical for most people, so some compromise must be made IF you need a smaller image. As I wrote in the article:


If you're working with print or video in mind, the increased resolution will be a nice bonus. However, most of the time you'll just want it for a website or monocled forum post ranting about the golden days, and 1600x1200 images aren't exactly web friendly...

Sadly, there's no perfect solution here; every way you approach this will result in some distortion.

When compromising this way, the best approach I found was suggested by a comment in the article: "Try nearest up to 640x1200 and then bilinear down to 640x480 for an even sharper image." This way the image remains perfectly sharp horizontally, with only a slight vertical blur: 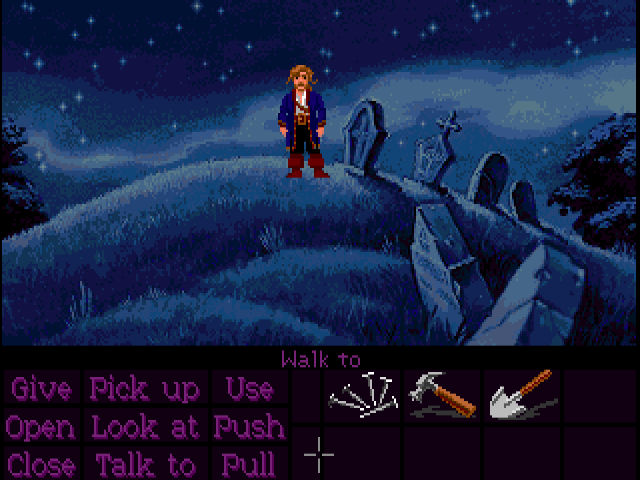 Photographing a monitor might be the 100% historically accurate solution, but it's unrealistic to expect that when most people are still posting screenshots in the wrong aspect ratio or in blurry low-res .JPG. Plus, there would still be variations due to monitor brand & quality, user configurations, NTSC vs. PAL, etc.

Furthermore, one has to consider the purpose of the person using the images. Yes, the CRT picture will be historically accurate, but 99.99% of people playing a DOS game today will do it via DOSbox in a LCD monitor. So for someone saying "Hey kid, go play Monkey Island", I'd say the 1600x1200 screenshot (or even the compromised 640x480 one) is more relevant than a CRT photo.

Is that process called super-sampling?

I thing it's just a matter of time when emulators implement super sampling. It certainly looks nicer than opengl or openglnb options. 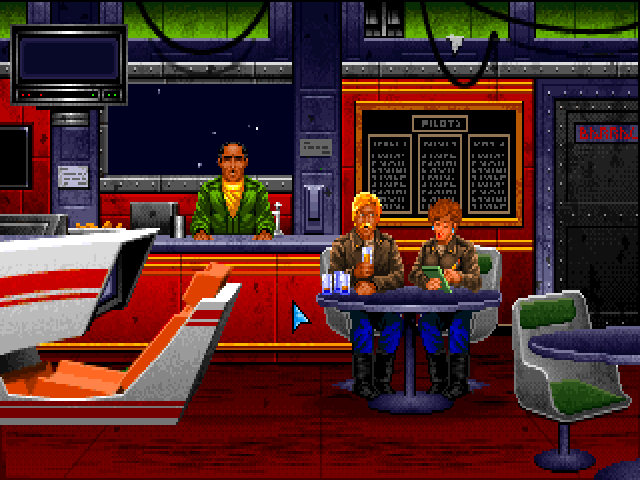 The "320x200 -> 640x1200 -> 640x480" method is a hybrid - vertically you down-sample (which adds a slight blur but reduces distortion), while horizontally you simply double the number of lines via Nearest Neighbor, keeping them perfectly sharp.


"Try nearest up to 640x1200 and then bilinear down to 640x480 for an even sharper image." This way the image remains perfectly sharp horizontally, with only a slight vertical blur:

I look forward to experimenting with this approach.

As I build out the "Games" database, I want to do my best with the screenshots but in a way that isn't completely impratical.

I should be able to use Photoshops "Actions" in a batch process on folders if it works well.

Thanks for the info!

Welcome everyone, apologies for the original 5/6 write up, I was unaware the original image had been altered. Glad you came over to share and I shall be experimenting myself. All of our goals are the same, to simply show these games off in a way the designers intended them to be seen. I don't often do screenshots myself. I really only do them so I can create title cards for my videos and left/right borders when I put 4:3 stuff into 16:9 - My YouTube stuff is all camera on the CRT because that's the way I like it and I genuinely feel despite any issues that might have it's the closest anyone is going to get to how it really looks.

The direct 320x200 into 800x600 always worked for my limited needs of title cards and such, but given that I've recently been writing some reviews to go along with the videos I would enjoy seeing this stuff as close as possible when a CRT picture will not do. Thanks for coming over and I'm sorry for anger directed your way, that's simply how passionate I am about the issue.

For Phil, here's my savegame file from Monkey Island which should hopefully put you right at the end sequence where I took those shots.

Here are my findings with experimenting with the compromised smaller size method. Now, assuming I have it right, and feel free to correct me if I'm wrong, I did the CRT shot, the straight 320x200 screenshot right from a DOS machine, the 800x600 straight method, the 1600x1200 method, and the nearest to 640x1200 and bilinear to 640x480 compromised size method. These shots are from the game Silpheed for DOS which I felt might be interesting considering the EGA 16 color pallet. Might give us more simple images to study. 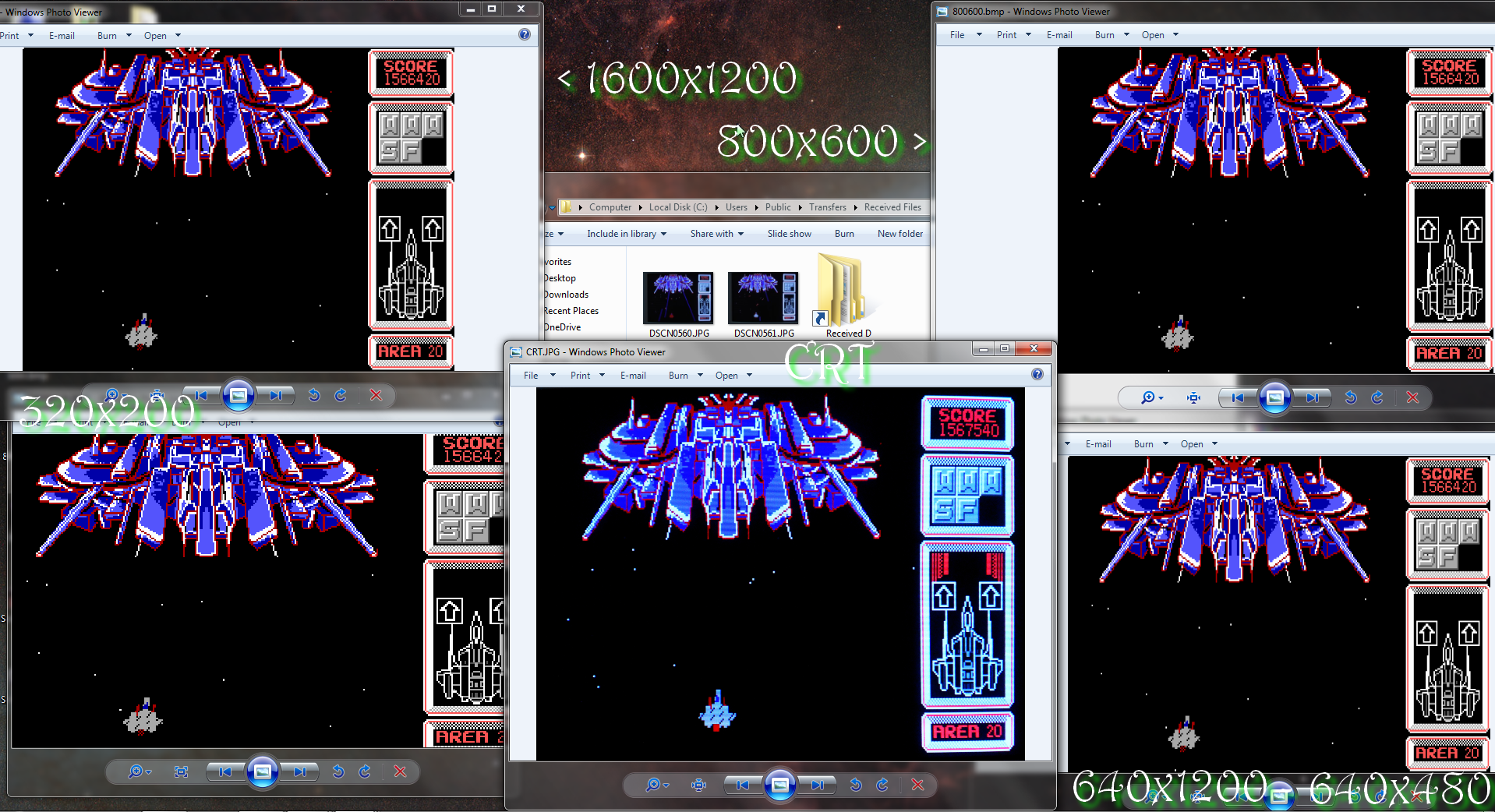 It is my belief that zoomed out all in a 4:3 aspect ratio are quite fine, with the CRT offering the best overall example of what I actually saw. 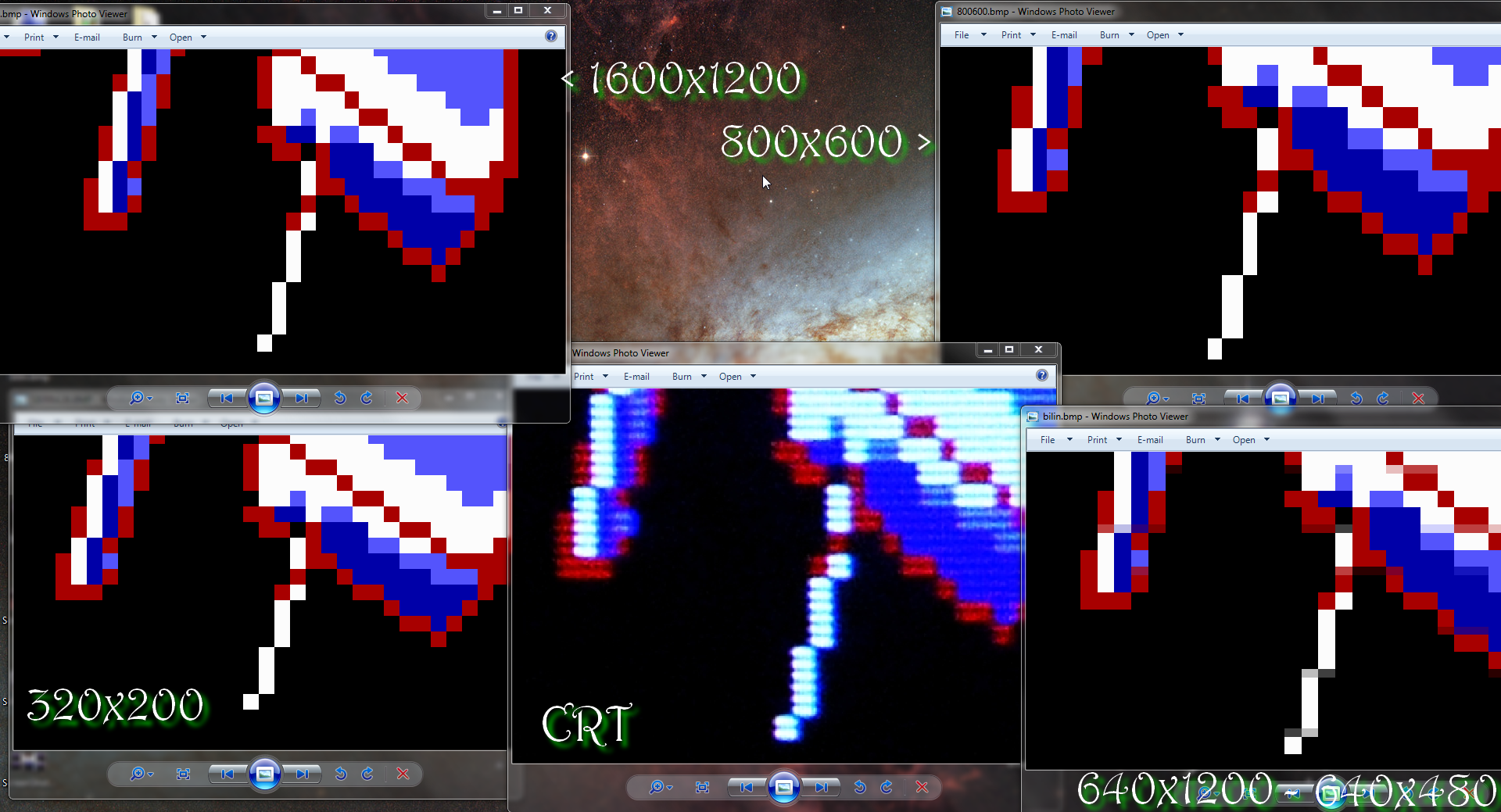 Upon zooming in you'll notice the 1600x1200 picture is "near" perfect in terms of pixel placement to the CRT image. I actualy do notice one or two pixels that are off in the 1600x1200 compared to the CRT. However the new 640x1200 nearest to 640x480 bilinear not only adds pixels but changes the colors of them. There's a lot of steps to remember for this method considering it has its own faults. Personally I do still think it looks better than the straight to 800x600 method, but those changing colors make me very confused about how to best compromise. If anyone wishes to have the actual shots I used please let me know and I'll upload them.

This is the simple method. You'll notice it's sharp, but has a clear distortion. It's easy to see in the small door on the right of the screen (some of its lines are thicker), because there are 80 random extra vertical pixels lines added in to make the jump from 400 to 480: 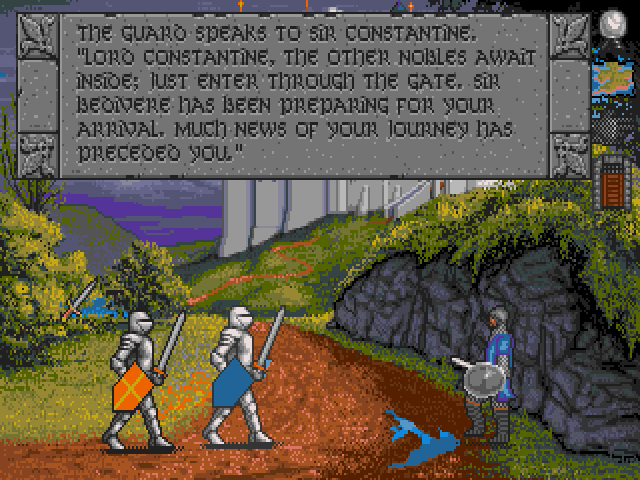 By downscalling, these extra lines are slightly blurred, leading to some color bleeding. But, if you're looking it straight up without zooming in (which is what most people do), I think the end result is more faithful: 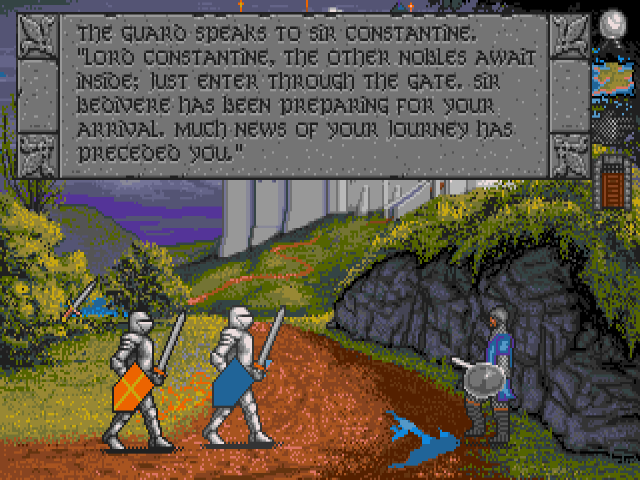 I believe I'm going to attempt this method from now on, assuming I can remember all the steps. But I did want to point out it's by no means perfect, even the original 1600x1200 shot was not "perfect" to the CRT in those Silpheed images. Close enough, but technically speaking so is putting it straight into 800x600, it really is close enough and on a zoomed out picture you have to look really close to see differences. It's not the same as the original widescreen look of a true 320x200 image compared to 4:3 shots. I do believe that color bleeding thing is something to pay attention to IF we're zooming in or if we're specifically talking about colors in a game. But I will be trying this method for my next game review...

I'm still going to have to spend some time to figure out the proper math for non standard resolutions like 640x200. DOS used some strange resolutions at times as well. I think this is a good discussion for those of us heavily into the issue... But in terms of historical preservation, I think we might lose some people getting this in-depth. I do wonder if a simple message of "just put it into 640x480!" would be the best thing in terms of getting sites like Moby to change their ways. If you can hammer that thought process into them, it's a lot better than what they currently do in my eyes. Not that I don't want it to be "more right", I just know the more steps you tack onto something the more the majority of people are going to stop caring.

Your CRT shots are quite blurry. What hardware do use to display them? There is clear distortion going, likely created by the optics or curvature. The red pixels are thinner than white because of the actual CRT technology (white needs red, green and blue dots, red just the red one. I certainly wouldn't use that as THE reference, more as one possible rendition on one CRT.

In terms of math, an integer scaled 1600 x 1200 of 320 x 200 IS the reference. If you then have an actual 1600 x 1200 display and view it 1:1 pixel mapped you DO have the perfect image. At that level, the CRT's technology limitations mean that it actually cannot display the image as accurately as it is defined digitally and mathematically. This is obviously a virtual construct, and any display on a monitor will end up an approximation, with the 1600 x 1200 LCD being the closest.

Now how relevant is all of this to some DOS thumbnails or YT videos on the internet? Not much really. Having to re-size images and videos, well IMO this is NOT the answer. I would much prefer that emulators such as DOSBox would do this for you when you press the screenshot or video capture button. They might just care enough about this issue to actually do something about it. It's more likely to convert that group than it the entire group of content creators.
Post Reply
43 posts