Oh, once I get to that kind of crap in a game I'm all for cheating at that point! No matter how much I love mapping I will always refuse to do what my father did; map a game like Eye of the Beholder!

For the most part the Gold Box games are quite fair when it comes to mapping. Secret of the Silver Blades is the most annoying of them all, but that's just because you have to waste paper. You don't get cords for most of the game, so you're kind of stuck starting in the middle of the graph paper and going from there. Wasting a sheet of paper just to map down 5 spots because you ran out of room can really piss you off - But, it's not hard or unfair.

The very first time I ever beat Pool I did tape together the wilderness map, and it looked pretty sweet. But I always end up tossing them all simply because it's half the games enjoyment. I just want to do it again the next time.

Progress in the Forgotten Realms wilderness... 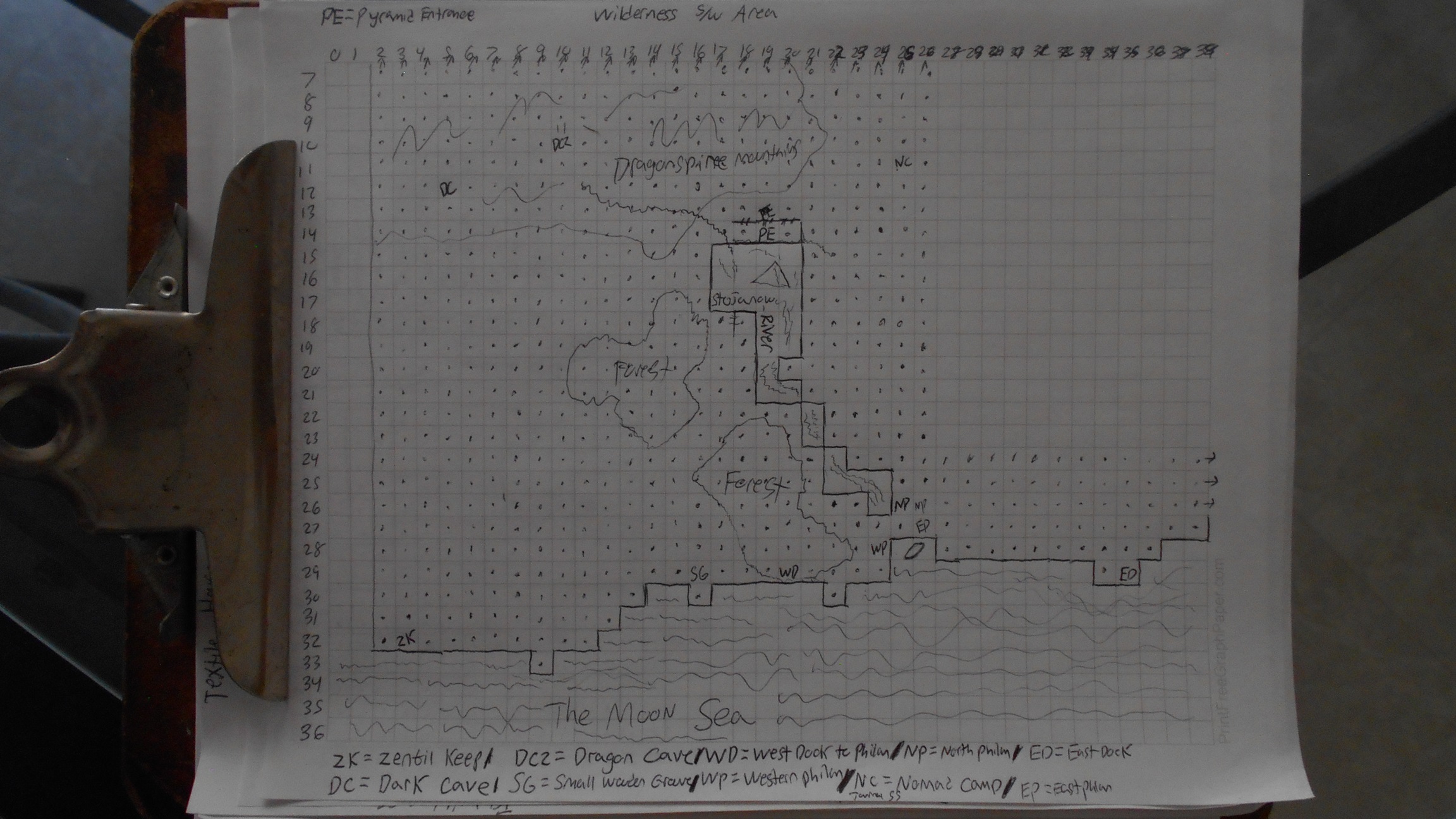 Curse is so funny.

I finally determined the proper tactic to kill the wizard Dracandros, and escaped that tower intact (only one person was poisoned by a Wyvern, a fixable problem). I get to Hap and cure everyone, ID all of my weapons, chuck my unused stuff which was weighting me down, then decide my next course of action: To get to a town where I can train up all the XPs I've gained since I started the game (A TON). Finally, everything feels right and I'm all organized and ready to kick this game's butt.

So, I venture forth back onto the map view and go North, the only way to go.

As soon as I leave the town, all of my dark elf weapons and armor crumbles to dust! Basically, everyone is naked and defenseless.

Oh, and suddenly here is the Dracolith (a fire breathing skeletal dragon monster) I avoided in the tower, ready to seek revenge. The only way out of Hap is through this guy.

Time to go learn Resist Fire and work on a whole new puzzle.

Oh crap! The thought crossed my mind of mentioning the whole thing about Dark Elf's weapons not being able to be used in daylight... I was thinking you had already passed that part. Yeah, that was a surprise the first time I played the game, but I guess it is a D&D thing. Now I was pretty sure that you got all your weapons from the first game back (at least at some point) in this game; so I don't think I would have ever wanted to sell everything in exchange for the dark elf stuff. It is a strange little game, that's for sure. I only have a couple more things to do in the wilderness of Phlan before I go after the final few areas of the old city. Still much to map... The castle area itself is 4 separate 16x16 areas.... Still got 3 more areas of the city to clear... Plus... The dreaded graveyard... Oh god.... That graveyard gave me such troubles the first couple times playing. Nothing creeped me out quite like the D&D games as a kid... Death Knights of Kyrnn was the worst, lots of horror elements in that one. But it's suggested that you go into the graveyard quite early by the people in the game... Wrong... That's the last thing to go and do! Watch as all your levels get sucked out of you if you go into that thing in the beginning! Oh, but I'm prepared this time... Found a genie in a bottle who's sole purpose is to kill vampires. I'm owning this game! Neither the party or a single character has died since the first couple areas.

I've made it to a town called Yulash. I got rounded up by the Commander of the town and he gave me a map to the pit of Moander. That makes me a bit nervous: Moander in the book was a horrifically evil god, quite gruesome and powerful. A guy's gotta do what a guy's gotta do, though, right?

I finally got to Train up my crew and most everyone is 8th level now. Ho-lee-smoke my mage/clerics are powerful now. If we get ambushed in the wilderness - where, annoyingly, baddies are about a mile away each time - I can just sit back and fling fireballs all day and wipe out entire armies without much effort. Close quarters are still as tough as usual, but long distance? I pretty much rock against non-magical things.

I've noticed when given the chance to Parlay, pretty much I always pick being "Nice". It almost always seems to pay off unless the devs just wanted me to fight someone. You can tell (via reboots) that there are some Saving Throws going on, though, which is nice to see you're not completely on rails. Mostly on rails, but not entirely.

Incidentally, I need to see if there's a way to block Hold Person spells. When I encounter large bands of clerics they can be super annoying. Now I know how they must feel when they are battling my party! Ha!

Some of my characters in Pool are already level 7 :p - I think I'll be capped pretty soon for the rest of the game, but that just means I'll instantly be able to train (provided I have money) once I transfer them to Curse.

Just wait until you get to Pools of Darkness... That game is so crazy... You'll be hopping dimensions at one point and you will littreally be traveling on top of Moander's body... In one of the weirdest and most memorable RPG moments ever; you'll be inside of his heart and being flushed (transported) when his blood flows through... God that game is nuts...

In Pool it really depends on the type of monster and your abilities when it comes to the proper action when you parlay. Kobalds? Abusive, always be abusive... They'll be insulted if you're nice to them. hahha.... I hate Kobalds so much... I would rather face one monster with 100 HP than 100 monsters with 1 hp... Pretty much anytime you face Kobalds there are at least 20 of them and some of these battles can last 20 minutes long when you're guaranteed to win anyway... Ugh!

Some stupid monsters it's better to be "sly" with them. If you're party is not so good yet; being meek can get you past them. Of course I've been out in the wilderness of late... Minotaur's... Lions.... Displacer beasts... Ain't no use trying to talk to those things

Pool update; I'm done with the wilderness! Closing in on the final few areas! Some select pics. 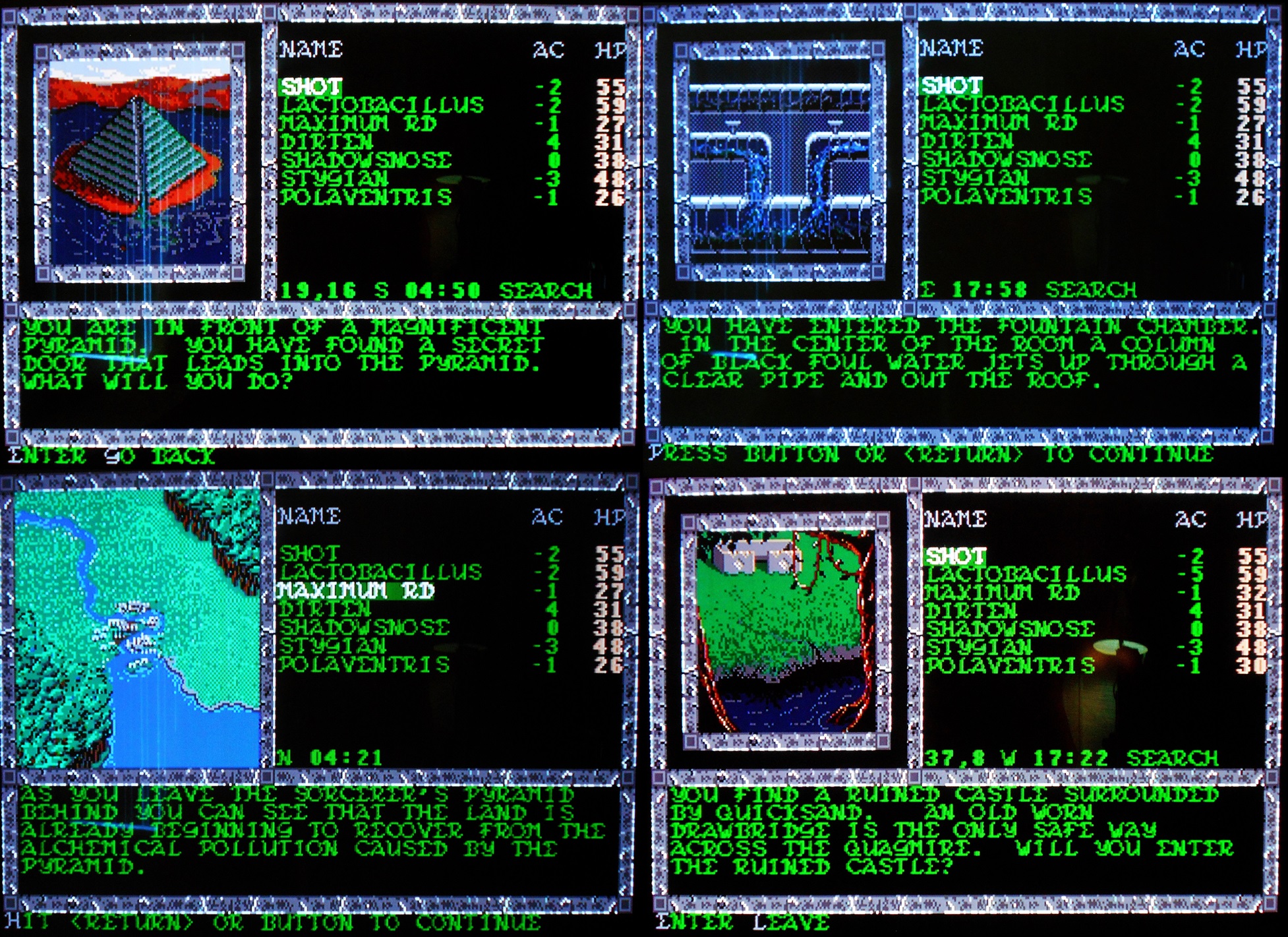 And here we have some more. Nice example of how even in the wilderness the battle screen terrain is very much dependent on the environment you are in. Never random. Here a river blocks our path to the enemy; but we find a crossing near the bottom of the screen. 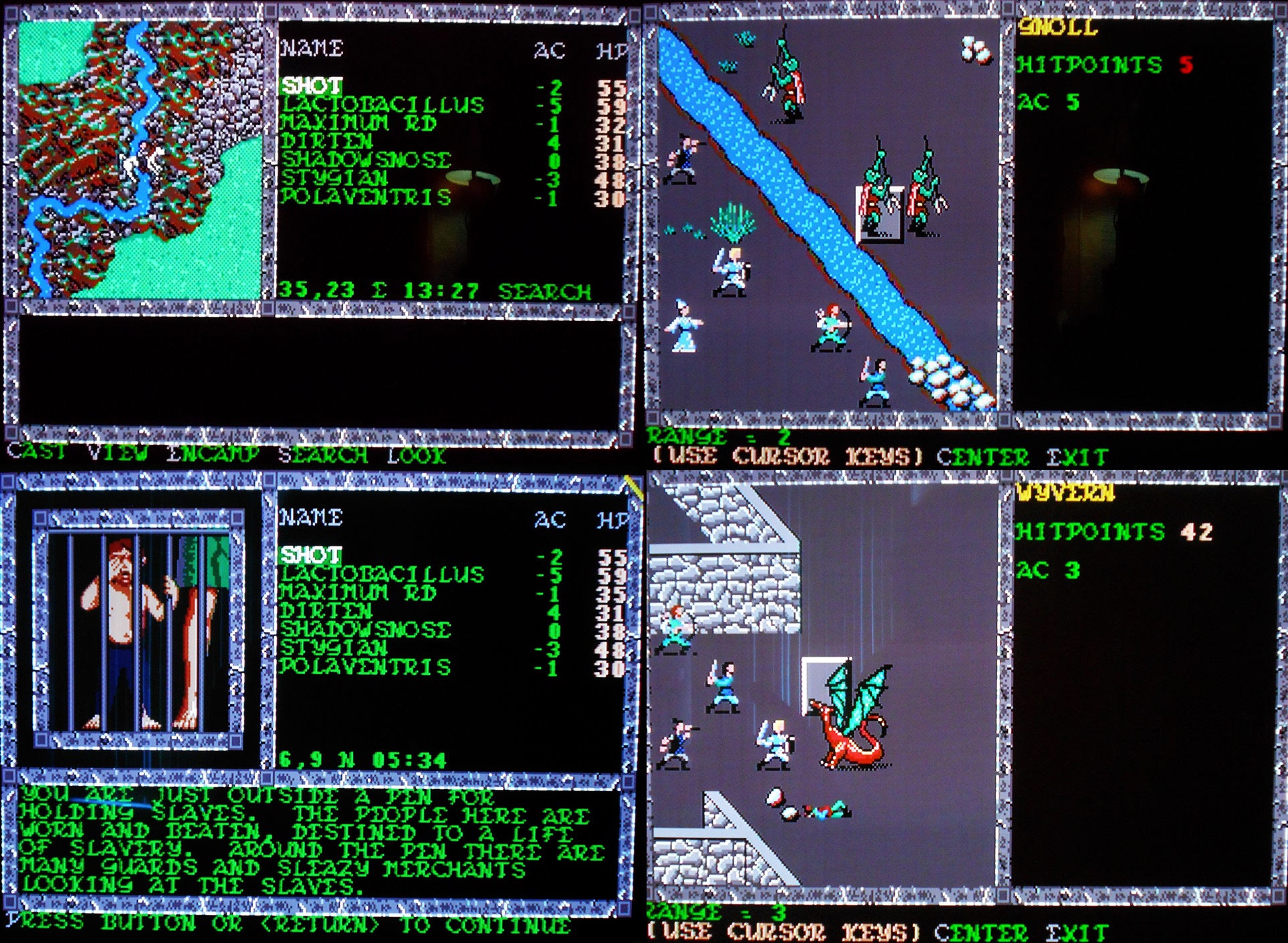 That's pretty sweet. And your progress is nuts! I'm glad to see I'm not the only one taking shots of my screen with a lamp light bouncing off it sometimes.

I had one battle in Curse early on that had a "river run(s) through it", too. It didn't impact the tactics nearly as much as your example, though.

I'm deep inside the dungeon of the beholder in Curse right now. I've gotten a bit lost a few times and the final battles in each main town really can take their toll. It's so interesting - you'll enter a big battle and get your ass kicked. Reboot. Try a new tactic. Reboot. Leave and think about it all day and have an 'a-ha!' moment at work. Come home, and with some luck get that huge reward. I like that a lot.

Dude - yet another bug surfaced. This game really is a buggy sack o' poop, code-wise. I read about others having the freeze issue. I've learned to simply save to a new slot constantly as I have to still reboot once or twice a day due to freezes. But then earlier tonight one of my characters Readied a cursed sword. Can't let go of those, and it was making him go berserk during battles against everyone. Ultimately I had to kill him to 0 hit points just to get out of there. But I couldn't rest to learn Remove Curse, either. I was in a bad place where I needed to make some progress as there were no safe zones, but I had this cursed guy who, after each encounter, I'd have to kill. Usually I'd cast Hold Person on him during a fight, then at the end kill him with one hit, then badge him. Ugh!

Anyway, I had to do "life things" so I turned the machine off. Came back hours later and started up again.

Then, when I picked my Save game to start, the screen gave me this really weird and all-new error at the bottom of my screen.

Fun new error at the bottom of one of my launch screens.

Isn't that cute? I was able to click 4 times and the error would disappear and let the game load. Whew! But then, during play the player with the cursed sword - his sprite was totally jacked!

The floating head got my son to laughing when he saw this on-screen.

You'll notice the floating head is actually the head of the character below it. And, during battles it would simply turn into any character that engaged with it. Total sprite garbage.

Once I finally was able to cast Remove Curse on that character, everything went back to normal. It had something to do with the cursed item error and that particular dungeon, because I had a cursed item earlier in the game, too, and never saw this issue then.

Talk about a game that didn't get a very thorough QA pass! Wow. At least this bug was sort of funny and not a game killer.
Locked
153 posts