A project I've been torturing myself over for years was inspired by a magazine cover story from Amazing Computing for the Commodore Amiga (aka Amazing Computing) published in November of 1991. With big red letters on the cover it stated, “Amiga on the Go” super-imposed over a photograph containing a somewhat poorly lit and mysterious device in the foreground of a public-use airport and a private plane.

Before we go too far, let me simply state that Amazing Computing was one of the two best Amiga magazines ever printed - the other being AmigaWorld. Both were written by Amiga professionals that targeted adults - with cash - who were interested in the Amiga not merely as a gaming console but as a serious business and creative platform meant to be expanded and pushed to its limits. Frankly, this is how many in the US saw the Amiga at the time. And as an adult today, I greatly appreciate this magazine’s mission and voice.

Founded and run by the Hicks family of Massachusetts, Amazing Computing delivered professional reviews and Amiga news for 14 years from 1986 to 1999.

The feature is a How-To article for connecting an Amiga computer to a Sharp Wizard, which was a very early-days “electronic organizer” device. Once connected, the two machines could pass data back and forth, thus allowing you to take your “Amiga [data] on the go.”

First, let’s take a closer look at the handheld device we need to get this project going.

Before the electronic handheld Personal Digital Assistant (or PDA) as it was officially coined by Apple and later popularized by Palm in the 1990s and early 2000s, there was an even more ancient device that helped set the stage: The Sharp Wizard.

The original Wizard was named the OZ-7000, released way back in 1989 and retailed for $299. In today’s economy that’s approximately $700 smackers, and cost about 2X as much as a Commodore 64 at the time in the USA.


It opened like a book, with a keyboard on one side and a small screen and a place for additional programs to be loaded on the other side.

Later Wizard models essentially provided the same core features but in different form factors. The built-in programs included a calendar, calculator, scheduler, contacts, a multi-timezone world clock with alarms, a text-based memo pad and a terminal program. Data was entered into the original Wizard using a somewhat difficult to use but functional keyboard presented in an odd portrait layout.

There was even a “Secret Function” that let you store text data behind a password. You know, so you could store your Bitcoin private keys safely and securely in a place no one in their right mind would ever think to look. I’m not crazy, you’re crazy.

The Wizard helped set the table for everything you’d find in later PDAs and eventually those phones permanently stuck to all of our hands and plastered to our faces.

The OZ-7000 had an internal memory of only 32 Kilobytes and a tiny little 96x64 dot LCD screen - without a backlight.

It sounds modest but at the time it was considered quite innovative. Paper lovers everywhere looked upon it with scorn much like many did the original Amazon Kindles. But their skeptical stares wouldn’t make the Wizard go away. The concept only continued to grow and evolve.

The early Wizards also had the ability to use expansion cards (IC cards) that provided additional features. The IC Cards were inserted into a slot behind a transparent plastic panel with an overlay touch-sensitive sensor organized in a 4x5 array of touch zones, thus allowing up to 20 "buttons" to drive the IC Cards’ functions.

The IC cards include memory expansion, a dictionary, expense managers, investment planners, language translators for 8 different languages, a BASIC programming card (I’d love to get my hands on one of those some day), a couple of games like chess and Tetris, time management spreadsheets and more.

In other words, when the IC Cards are inserted they provide a sort of “extra button area”.

Finding these cards today is REALLY damned hard. Partly because they didn’t sell a ton back in the day, and partly because so many Wizards have been tossed in the trash. Why? Because one of the biggest problems with the Sharp Wizard in 2022 is the screens fail and they are totally unrepairable. The only fix is to replace the screens entirely, and those replacements simply don’t exist anymore. To be frank, they are redundant tech that are all winking out of existence. . .


Going back to the Amazing Computing article, it declared right at the beginning that the original OZ-7000 was not capable of connecting to an Amiga as they described. However, the brand new OZ-8000 released in 1991 could be used, and provided some really great upgrades over its predecessor.

The OZ-8000 is THE Wizard to get for this project. Unfortunately, their screens were not built to last.


It was presented in a much improved landscape format, which allowed the screen to go wider (240 x 64 dot) and provided a much more natural QWERTY-style keyboard layout. It also doubled its internal memory to knee-buckling 64K (watch out Commodore 64!).

And, the OZ-8000 is backwards compatible with the previous model’s IC cards.

Sadly, in my experience the OZ-8000 screens are even more prone to failure than the 7000. But if you ever do find one that works - holy smoke you found that needle in the haystack! At least until yours fails...

There was a specialized (and hard to find) RS232 cable for Wizards that you could attach to computers and share data back and forth.

The large powered version was one of the original cables provided. Smaller, non-powered ones followed (and work just as well).


At that point and time, Sharp only supported PCs and Macintoshes. (And the Mac support was limited.) Not ready to accept that situation, the author of the article proceeded to explain how to connect a Wizard to an Amiga using a proprietary RS232 serial cable with terminal programs.

The capability presented in Amazing Computing is fairly limited as it mainly allows the sharing of the Memo text function. Using your Amiga’s keyboard to enter data on the Wizard is pretty danged cool, though.


[To view a short demonstration, view the video above starting at 07:25, or click here.]


But with PCs and Macs getting all the love, it was only a matter of time before the incredibly passionate Public Domain software scene of the Amiga would come to the rescue.

One great solution was created by Herb Choate (rhymes with "boat"), out of Alabama. He provided a very slick program to allow for the sharing of data across several of the Wizard’s built-in programs.

A pilot for the Air Force then later Southwest Airlines, Herb used his Sharp Wizard a lot in his early flying career. "Even made flash cards to study for check rides and keep up with systems knowledge."

The problem - which is extremely common with a lot of the PD software on Aminet from back in the day is it is shareware. It came full-featured, but introduced a 20-second nag screen on launch and would continue to nag you every 2-3 operations.

I actually hunted down and found Mr. Choate a couple of years ago to see if I could get the password to remove the nags. He was absolutely stunned, and thrilled, and proceeded to send me photos of some of his old Amiga collection he had held onto after all these years. But after searching fruitlessly for a few days he apologized and gave up, and we parted ways.

Fast forward back to today…

Unbelievably, my personal Amiga Super Hero - Chris Brenner, aka Crispy - took a look at the program and sent me a little patch to remove the nag screens!

This quirky little program allows me to backup all of the “important” data I store on my Wizard. And, I can use a text program like TurboText to edit entries. Saving those changes can be a challenge. And the backup program doesn’t seem to allow me to easily create data from scratch. But it’s a nice compliment to using a terminal for writing notes and memos.

For now, the AmyWiz2 program - with nag screens - can be found here.

And the updated Deprotect program by Crispy can be downloaded here. It will get pushed to Aminet in the near future.

That's pretty cool, haha. I used to use one of these way back then. I still have a cheaper version with a serial link that plugs in via headphone type jack.

I was going to add this to the video, but was afraid someone would try and ding me for copyright crap. But the 5500 series was in a popular Seinfeld episode. It's pretty hilarious.

Haha. I remember that one.

I think my Willard is an OZ-640 with the cradle that attaches to serial. Probably works different.

Really greats and professionals article & video, as always ! Thank you !

Here, I do the same with a Psion 5 / 5MX (or with an Ericsson MC128, an official clone), but it's more easy 'cause I can use the Compact Flash for transferring files (PCMCIA CF reader, or USB with my Subway on the A1200 or even on MorphOS) 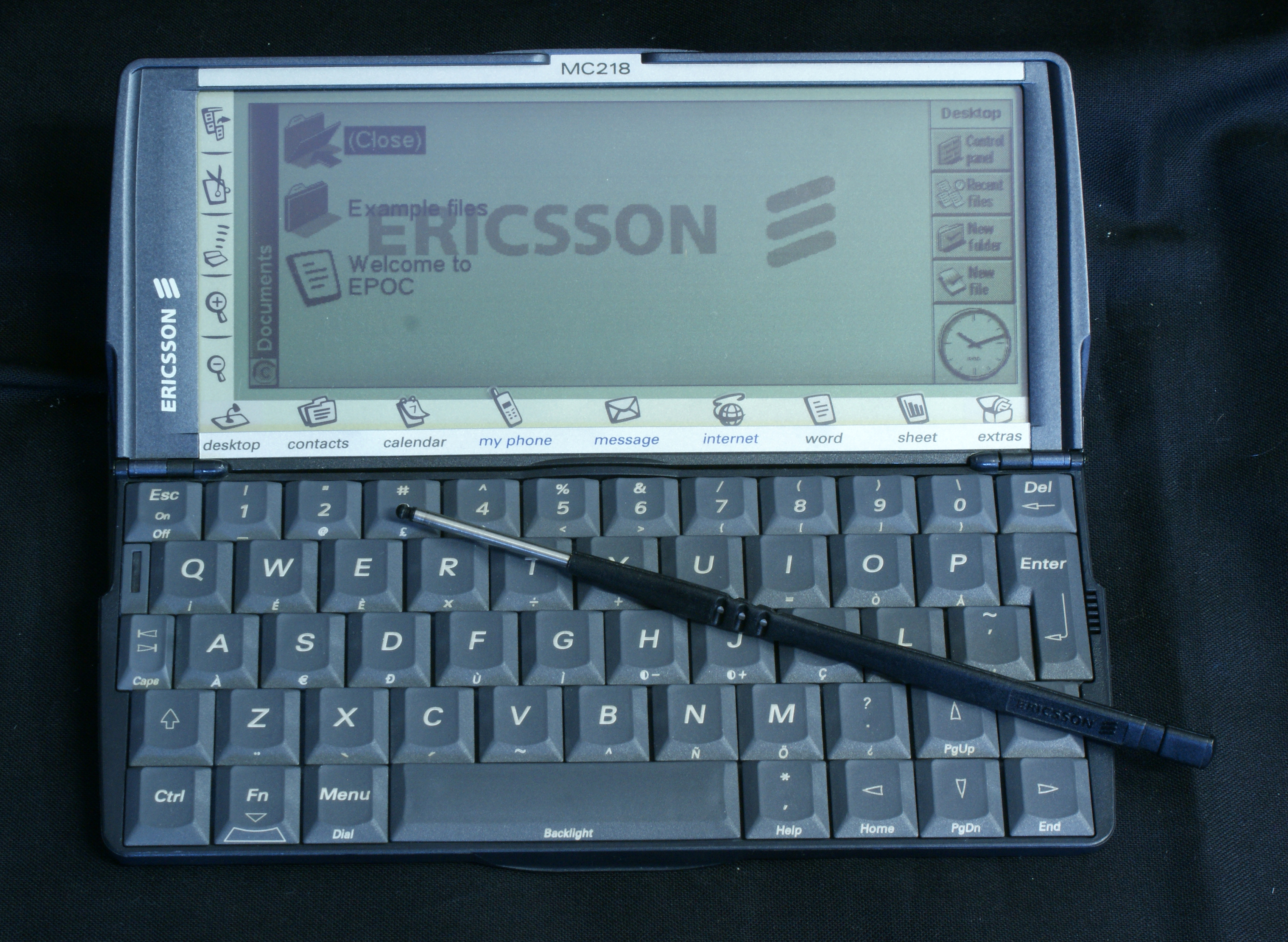 I use it for writing long text, help by the great tiny mechanical keyboard.

Thanks to Mister Choate and Crispy too !