Earl Weaver Baseball - One disk shy of the entire 'family'

Soon after the Cubs won the World Series in 2016, I got the harebrained idea of creating a 2016 Stats disk for Earl Weaver Baseball - one of the most innovate baseball computer games of all time.

I had the original program as well as a copy of the powerful Commissioner's Disk, but never any of the MLBPA (Major League Baseball Players Association) Stats disks. Friends on Amiga Love did send me the ADF for 1988, and another recently sent me 1989.

There were five official stats disks created for the Amiga: 1986-90. Each year player stats disks were sold at the retail level for the previous year. So in 1987, when Earl Weaver Baseball shipped, there was a stats disk made available for 1986 since that dataset was complete, as so on. Sadly, by 1992 the franchise moved to MS-DOS and left the Amiga behind. It is my understanding that 1990 (made in 1991) was the final stats disk made available on the Amiga. And, interestingly, it looks decidedly generic and a bit ghetto compared to all of the previous years.

For those that are interested, you should read a bit about this innovative game and why it is so important to the entire genre.

In any case, I even contacted Eddie Dombrower, the original creator of the game in the 1980s to see if he knew how I might import all of the data (say, from Baseball Reference) rather than type it all in.

As I mentioned in the post linked above, Mr Dombrower kindly wrote me back about making contemporary stats disks.

Thanks so much for reaching out to me.. it's always a blast to hear from fans of this game which is so near and dear to my heart.

I think creating a stats disk is always a great idea, but I don't have a way to do it right now... probably the best thing is, as you mentioned, is for fans to do this.

If you're still playing on an Amiga, then the only option I'm aware of right now is to use the Commissioner's tools on the Amiga and hand enter the data (what a labor of love that would be).

If you're on a PC version, there are actually some import tools in the EWB II Commissioner's disk.

The thing is, there are some stats in Earl Weaver Baseball - particularly the defensive stats - that don't match up to what one can easily find online and transcribe using the Commissioner's Disk. Back in the 1980s, EWB used data from STATS, which is a service media companies can pay for even today. The data is not readily available to the public, however. The best mere mortals can do is use Baseball Reference, which in most cases would be good enough. STATS goes a level deeper, though.

Long story short, after all this time finally lucked into an incredible auction. I nearly have the entire "System" now on original physical media.

All in all, 1 disk shy of a complete set. Super stoked! I'm going to spend some time duplicating the disks soon and seeing about trying - one more time - about creating a more contemporary version some time this winter. It's tough because not all of the data matches up. But I should be able to scan these old stats disks and try to at least see how some players were ranked, and loosely map that to new players.

For what it's worth, I've learned about an extremely rare game on the Amiga called MicroLeague Baseball. One of my online friends will type up all of the current player stats and run simulated games on his Atari computer (something EWB can also do). What's cool is he'll do this during the World Series and tell everyone which team one, how many games were played, etc. And last year it got it right! Pretty hilarious.

If allowed, I plan on posting and hosting all EWB Stats Disks (minus 1987, until I find it) here on Amiga Love soon.

P.S.
If anyone out there reading this has the 1987 Stats disk, please let me know!

Original packaging for the Commissioner's Disk

Original packaging for the 1988 Stats Disk

Four years worth of team stats

You checked TOSEC for the 1987 data disk?

Curious - how do you personally "check TOSEC"?

I actually have access to a public yet hidden FTP server on EAB, and it typically lists anything and everything TOSEC that is out there along with cracks, etc.

They have EWB (the game), the Commissioner's Disk and the 1988 Stats disk. They also have an "All-Time Great Teams" disk and "Earl Weaver Baseball Europe" from 1991 which I'll be honest - I have no idea what that means unless it's a PAL version. Both of these additional disks are in TOSEC, too. On Mr Dombrower's site - the creator of EWB - he offers NL and AL great teams, which I assume is the same as the "All Time Great" files on EAB.

But unless you've got a better way to search the entire TOSEC codex, I'd be very curious.

For what it's worth, TOSEC is massive and awesome. But it doesn't have everything. I've actually sent them two ADFs myself which they've accepted and added to their repository: Infocom's A Mind Forever Voyaging, and more recently the very first version of Excellence! (they only had versions 2 and 3).

If I get permission to share the ADFs from Mr Dombrower, I plan to contact TOSEC about these new Stats disks I've finally acquired (my contact is Swiss). When you have original disks, they ask you to Kryoflux them.

Yeah, they don't have everything -- but that is their goal.

To browse the files, you use a ROM manager (I like ROM Vault for Windoze) and then grab the DAT files from the TOSEC website. Let me load up the DAT for Amiga...

OK, here is what they have:
Don't know if any of those ring a bell.

If you need a disk, archive.org has most of the TOSEC compilations available. No need to visit those dirty pirate sites.

So that is exactly what is on the EAB site, too.

Looks like I'll be making more disks for them soon.

Just keep making stats disks for every current and keep submitting! you're living proof that the Amiga will never die!

I have made made stat disks over the years for micro league baseball (c64), earl weaver baseball (amiga), etc. I love entering stats. I use baseball reference. Earl weaver takes more time due to locating right handers vs left handed pitching etc.
I just got earl weaver back up and running. I love making great team disk and then using the greatest teams over the years 2016 Cubs, 1977 Dodgers etc. Whether they won that year or was just a great team.

Eddie made a game years ago for windows which was made after earl weaver baseball.
" I got it baseball ".
http://www.bangbangplay.com

The game also needed stat delevopers. I need to check if Eddie finished the final updates.

Hello,
I'm the original author of the 3rd party data disks available for the Amiga version of Earl Weaver Baseball. I also remade them for the original MS-DOS version of the game but only distributed 5 copies as the game just wasn't the same on that platform. (As a bit of trivia, I was able to easily port them using the Bridgeboard on my Amiga 2000.)

After I had made them, I contacted Electronic Arts to see if they would be interested in distributing them. (Somewhere around here I've still got John P. Manley's business card.) They eventually reached a deal with Stats Inc and were kind enough to let me know they were no longer interested. I released them as "shareware" and they were briefly mentioned in an issue of Info (April 1988?) and reviewed in the September 1988 Commodore Magazine. I sent copies to and tried to get "Fred Fish" to distribute the data files, but never received a reply.

The first disk can be found today as "EARL WEAVER Baseball - All-Time Great Teams (1988)(Patrix Productions)(SW)." I lost the physical copies of the original four disks (two more "great teams" disks and a 1988 MLB disk because EA (or Stats) was dragging its feet getting one made so I did it myself) and used to check eBay to see if anyone still had them.

I used the then-current edition of the Baseball Encyclopedia and typed it all in by hand on my Amiga 1000 and estimated that I entered 66,000 pieces of data. The most time-consuming were the pronunciations of the players names for the built-in speech synthesis.

I also made a fair number of bizarre ballparks that were the result of trial and error using a hex editor to go beyond what Eddie Dombrower had programmed in his in-game ballpark editor. Most of those attempts crashed EWB, but when it didn't I ended up with some really weird parks.

It was certainly a very poor time use of what should have been my prime teenage years, but it provided a nice summer income in 1988 and I know a lot of people enjoyed having all those extra teams, including me. What an amazing game.

I have not played a single inning of a single baseball videogame since the last time I put down Earl Weaver Baseball, unless you count the home run derby in Wii Sports. (I don't.)

All I really have left is one unused printed (Panasonic KX-P1080i or similar) diskette label for the first disk. Do let me know if you have any of my original disks. 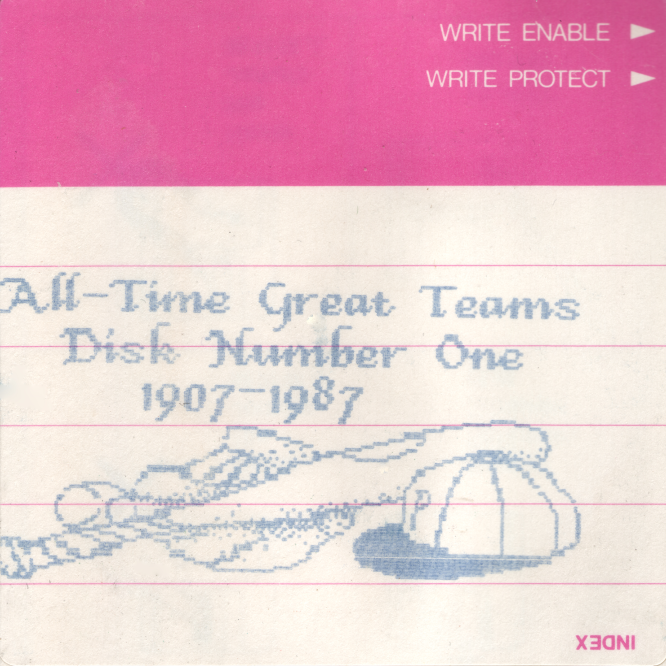 @Patrix what a truly fantastic story - thanks so much for sharing that piece of history!

I tried to make a team disk for the 2016 Cubs but got lost in some of the stats - stats that aren't published online with Baseball Reference and I wasn't sure how to wing it and keep things accurate. I did some research and soon began to realize Stats or Baseball Info Solutions or someone like that probably had them but those are obscure (and probably expensive services) really intended for publishers.

If it was a more straightforward process I would have done the playoff teams for 2016 for sure. But yeah - talk about a labor of love to do all of that. It's very time consuming.

Do you still have any of your old Amiga stuff?

(Do they still make the Baseball Encyclopedia? Now I have to go look that up!)

I wish I had some of my old Amiga items. I've moved too many times.

What stats from 2016 are you missing? I can't recall anything in Earl Weaver Baseball that can't be found on Baseball-Reference or similar sites.
Post Reply
14 posts