Show us your Workbench!

Thought I would put my latest wb 1.3 up.. Playing some hippo this evening

3.1 with betterwb on my A600. Nothing fancy but I like the stock look more and more.

One grab of my MorphOS (on an iMac G5 with the flat theme from Highlander).
You can see PolyNet (the launch bar), my Sys: partition and the Preferences panel :

I'm a MorphOS user since 2002, MorphOS is my Amiga NG and I love it

I make everything with it, without Windows or MacOS or Linux, even if I bought a PC/Win10 this year for my job... but I don't use it (maybe I'll use it for WinUAE

That’s really nifty looking! I can’t run any retro/unusual OS as a main system.. Maybe Linux in a pinch but probably not.

Too entrenched with various pieces of software.

On the positive side I guess that takes the weight off the Amiga as it’s just a hobby.

Today I was procrastinating from my other procrastinating and decided to do a 2 colour WB2 style blue/grey backdrop for my A1200. I’m running a clone of my drive in UAE for now but it should look the same in real life. I figured I‘d keep it simple and save chip ram?

Did anyone ever make plushy boing balls? If so I need one.

How on earth would I go about getting RTG graphics mode on an A1200? I have one of those modern ram expansions which has no extra cpu, just some ram.. Hmm.

Second shot is to show what “Wangipad” is, it’s like a dock, and really nice and scriptable, but text only. I might switch to another dock.. but I love how minimal Wangipad is while allowing you to fit tons of entries.. (you can drag files directly into the app names and have it do things to the files.. Saves me a lot of going into dirwork or dopus!)

With eagleplayer sat in front of it.. is there any decent music player with a more standard UI that can go in a small, vertical orientation like that? delitracker and eagleplayer’s main WB style GUIs are masssiveeee. I’ve been spinning up the Amiga a lot to play old tracks, some of which are in really obscure formats that are really hard to play outside of the Amiga itself.

I enjoyed the early discussion about authenticity and wb1.x.. WB2 was really “my WB” as me and my bro got our A500+ running it.. Then my first totally personal machine was an A1200. It’s funny though as I consider my time with 1.x at my dad’s house really formative and it totally blew me away - I remembered exactly which games he had.. hilariously last time I spoke to him he didn’t even remember having owned an Amiga.

(he was generally more of an Acorn guy, and I’m still not entirely sure he believes me, which is pretty frustrating! Argh!)

Shot97Retro posted on Twitter an old ad with a wonderful A1000 handrawn. I falled in love of this drawing, so, I made a background for SimGen with it

PS : And take a look at my homemade Work's icon

Here's one I've been working on lately. Getting to this point has been quite a journey. But rather than go into all those details, which some of you may or may not find interesting, just know that getting to this stage took me a couple of weeks as well as direct help from a local Amiga mage. Long story short is my RTG picture.datatypes were totally wrong, and even reinstalling P96 did zero. I had to manually copy over the proper datatype version.

This brand new metal-case 15” monitor sports a 4:3 screen at a native 1024x768, which the zz9000 pumps out via HDMI. Pictures do not do the unbelievable sharpness of this screen justice. In person, with human eyes, it looks ... dare I say, modern. All this extra space with some Workbench tools can give me vertigo at times.

The distortion of the scan in the bottom-right corner was caused by my own hand.

There is a price: This image is only 2 colors at 1024x768. Yet after Workbench loads it takes an insane 50 seconds to load after the fact. I'll be chopping it down here in the near future (or will load something else). It's only 200KB, but that adds a significant amount of stress on the 16Mhz CPU apparently, as the graphics card doesn't seem to bear much of the load.

Intric8 : My A1000 "background" is 7824 octets for a resolution of 704x283 with 2 colors. I made this IFF ILBM file with three softwares. First of all, I used TVPaint on MorphOS, then PPaint always on MorphOS and finally DPaint IV on the 1000. So, the final size of the file is due to DPaint.

And, for information, this image in background with SimGen eats 22 ko of Chip Ram !

I made a background for my MorphOS, based on the same image. Here, I used ShowCase (MorphOS software) for crop and resize. Then, I used PPaint for his "negative" effect and his colors reduction ! 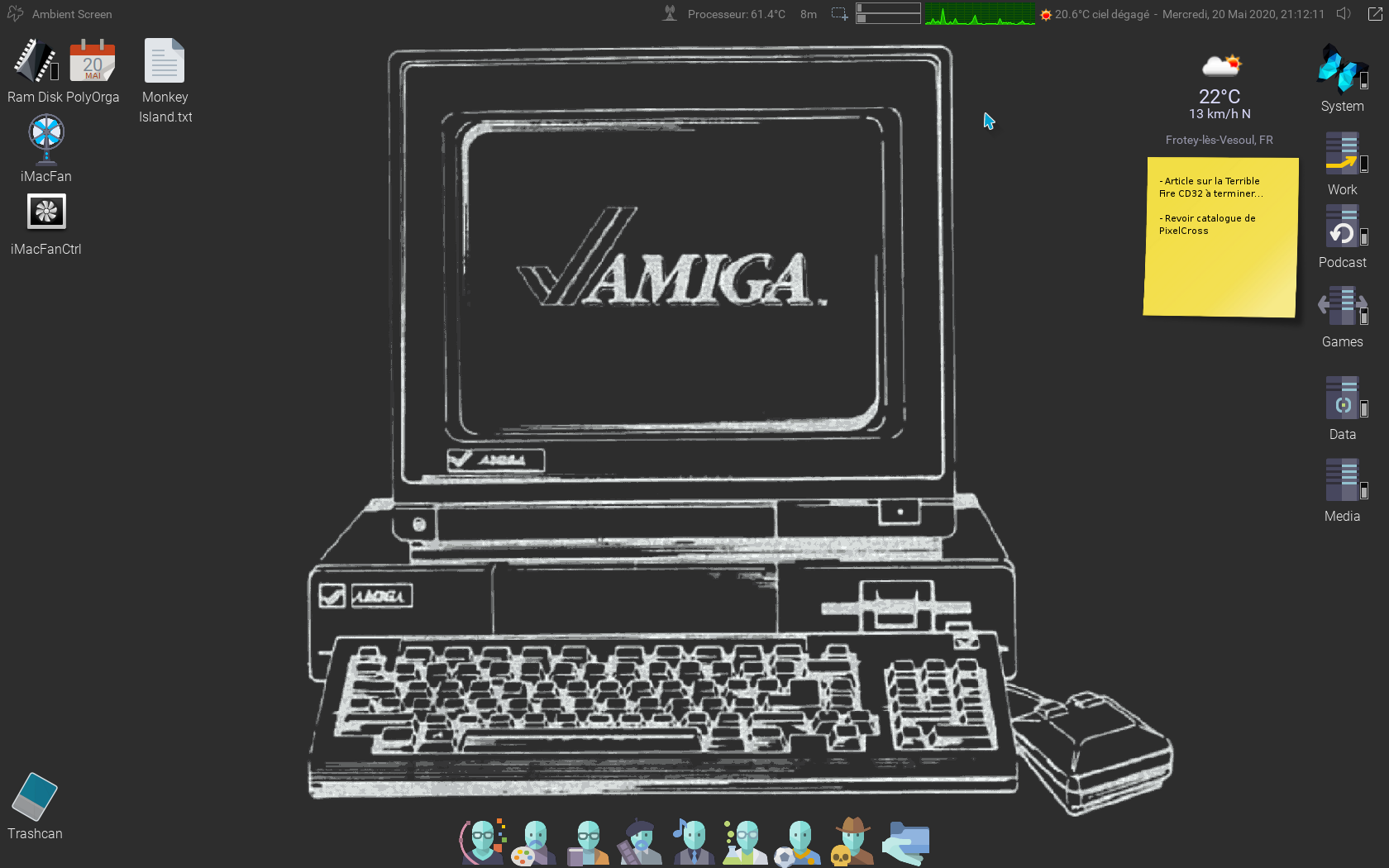 I thought resurrect this thread and say 'hi' by posting a screenshot of my A2000 (+ Vampire) Workbench.

It's running OS3.9, with a 16-bit RTG screen at 800x600. I'm using my GBAII+ (graphics card by Matze) instead of the Vampire HDMI modes, as it allows switching between native modes (scan-doubled via the Indivision ECS) and RTG modes without messing about with the monitor input source.

Anyway, I had fun looking through your screenshots, so thought I'd reply! 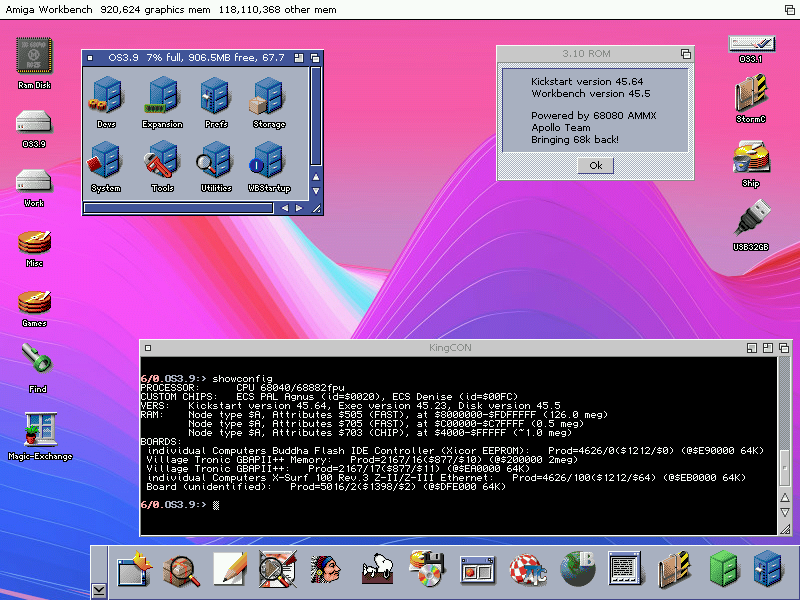 My A1200 is off getting recapped so I'm using WinUAE for now.. And my workbench mostly looks like this:

ArtEffect with RTG at high resolutions is really, really nice, and is fun to just mess about in.

I almost want to get another serial Wacom so I can have one plugged into the real amiga and one the WinUAE setup.
Post Reply
61 posts