The year was 1980 and it was one of those few, rare years when I was a child that I'll never forget because it was so impactful to the trajectory of my life.

It was the year my parents divorced. Which also made it the year we moved from Singapore back to the United States as they broke up and began their lives apart. I was born in southern California in 1971 and we moved to Singapore in 1977. My folks would later tell me they were "tired of the U.S. and wanted a real change" so they sent their resumes to various countries and Singapore was the first to respond. Both of my parents were teachers.

So, we packed everything up and headed to southeast Asia for three amazing years. This was when I was put into private school, Singapore American School to be precise, and began a wondrous mind-opening start to my scholastic career.

Coming back to the US, we landed in Dallas, Texas, because that's where my parents were originally from. At least, they were from the same state; they were actually from rural east Texas but craved culture and the city life so Dallas it was to be.

Now, having just lived in Singapore I was very used to hot and humid weather since it's located directly on the equator. What I wasn't prepared for was summer in Dallas. This happened to also be a historic year for a heat wave, where 100-and-teen temps rocked the city for weeks at a time. Boy's shorts in 1980 were also shockingly short, and my mom's A/C-less Datsun's black vinyl seats loved to fry my legs like sweet sizzling bacon.

As a result, I spent a lot of my first summer back in the USA inside our air conditioned apartment. And I became very focused on the new, fantastic 13" color TV and it's program schedule.

Every Saturday morning was filled with several hours of cartoons. And, sadistically, it seemed like a lot of the shows I wanted to watch were really early in the morning. In any case, I remember there being another huge bonus of the Saturday morning shows (on all of the major networks, too), and surprisingly it was the commercials. They were filled with magical products aimed directly at kids like me, except for kids who had money. Single mom, 2 kids, deadbeat dad... the commercials were mainly for hoping and wishing. One commercial stuck in my mind. Now, this was some time between 1980 and 1983 as the exact timeframe is a bit foggy.

This Christmas I decided to try and hunt one of these down for myself to share with the kids and see if it lived up to the spectacular commercial from my youth. Most of what I found on Ebay was incomplete: missing wall pieces, missing secret room pieces, missing lead figurines... Or, they might be complete but the box would look like it had been found alongside the waterlogged wreckage of the Titanic.

And on top of that, the prices would be north of $80, which seemed a bit steep.

Then, as luck would have it, I found a 100% complete specimen with a perfect box that looked unused for 40 years and I was able to snag it for $32. Sold!

I wrapped it up and put it under the tree and addressed it to everyone, from Santa.

Christmas night my son and I pulled out the original instruction booklet and learned how to play. It's a very simple concept, and honestly very cool. It can be played solo against the computer, or two players can compete head-to-head.

The dragon figurine is massive compared to the fighters, which seems right.

I think back in the day I would have been very tempted to paint these with my collection of smelly Testors model paints and crappy brushes.


The idea is pretty interesting, and does require your ears are working well enough (there is an audio jack in case you need to play the game quietly with headphones as there is no volume control). There is a row of buttons along one side of the board you can use to learn the various sound effects and understand their meanings.

When you turn the machine on, you decide where your "safe room" is located on the grid and mark it with a green plastic chip. You press your piece into the board to register it, and a sound will chime. The computer will then place walls randomly across the labyrinth but you can't see them yet. Your fighter can move 8 squares north, south east or west - not diagonally. You move your fighter out into the maze in search of the treasure. If you hit a wall, the computer will make a buzzing noise and you back up and place a red wall marker there. If you get within a certain radius of the treasure chest, an invisible dragon will awaken. You use the dragon figurine to make your best guess where he is located. Then you keep moving, your pulse quickening as you scan the board.

My son has been waking up an hour earlier than normal to play this game before eating breakfast. He loves it!

Like a king in chess, the dragon can only move 1 square at a time. However it can fly over the walls and it can also move diagonally. If he attacks you, you are transported back to your safe spot but can move 2 squares less than before due to your wounds. Now it's a race to find the treasure and return it to your safe spot.

Can you find it without getting caught?

By day 2, my son had beaten the game twice in "easy" mode. There is a harder version where you don't use the wall markers at all and try to play the entire game by memory (um...).

In any case, this game been a big hit! It's probably not really for the serious adult gamer, but for a younger audience it seems perfect. And, it's fun to do together. Sometimes fun is just fun, you know what I mean?

For a second there, I thought I vaguely remember this game. I didn't own it, but, the box art sure looks familiar. Then, the more I thought about it, while typing this post, trying to rack my brain where I've seen it before, I have finally remembered I had a poster with that very image hanging in my room! I didn't play D&D at all as a kid, but, I think I got the poster by mailing in proofs of purchase of something that I don't recall... the fog of a 48 year old mind

Edit: It was a promotional poster for said game!
It was a cool looking poster, and I remember being pissed at my younger brother for taking one of those oily, "wall walker" octopus things and throwing it against the wall to walk down my poster, leaving its greasy footprints down the dark navy blue background. And it wouldn't come off! 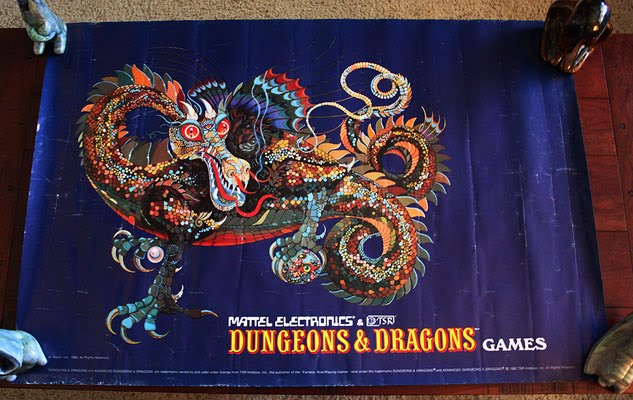 You're right fun is just fun sometimes. What a cool game! What a magical time to be a kid when all this stuff was coming out.

@obitus that's amazing! I always thought the box art was unusually unique. Now to know there was a poster for it - that's just very cool.

@intric8 It's funny how seeing something like this from your past can serve as a cue to open parts of the old memory banks... I remember the first time my grandmother came over to visit a month or so after I put the poster up. She came in my room and immediately shrieked "That Dungeons and Dragons stuff is devil worship! You need to take that poster down right now... look at the evil eye it's giving you from that thing it's holding in it's foot! Satanism!"