The aspects of JiffyDOS many probably don't know...

One thing I notice when I see people using their C64, especially with mass storage solutions like the SD2IEC (which people mistakenly believe is a 1541 replacement when it is not, it's more like a CMD-HD/Rear Admiral Thunderdrive replacement) is they tend to use launchers like FB64 as opposed to making use of excellent solutions like JiffyDOS. Which I think is a shame as JiffyDOS is a very powerful disk operating system, especially when using mass storage solutions like the SD2IEC that support the CMD-HD extended commands allowing the user to make directories, change directories, mount D64/D81's and essentially navigate the entire file system.

Due to this, I thought I take a handful of screenshots giving those interested a small taste of what JiffyDOS is capable of using mass storage. Bear in mind, this isn't a tutorial as such, this is just showing people that the de facto DOS standard for the C64 is actually a very capable disk operating system - Unlike CBM DOS which was barely a DOS at all!

Furthermore, as most are probably aware, JiffyDOS is fast - My SD2IEC is 22x faster than my 1541 with the SD2IEC running JiffyDOS. That's almost 9000 bytes per second on a 1982 computer.

Screenshot number one, the RAMdisk. 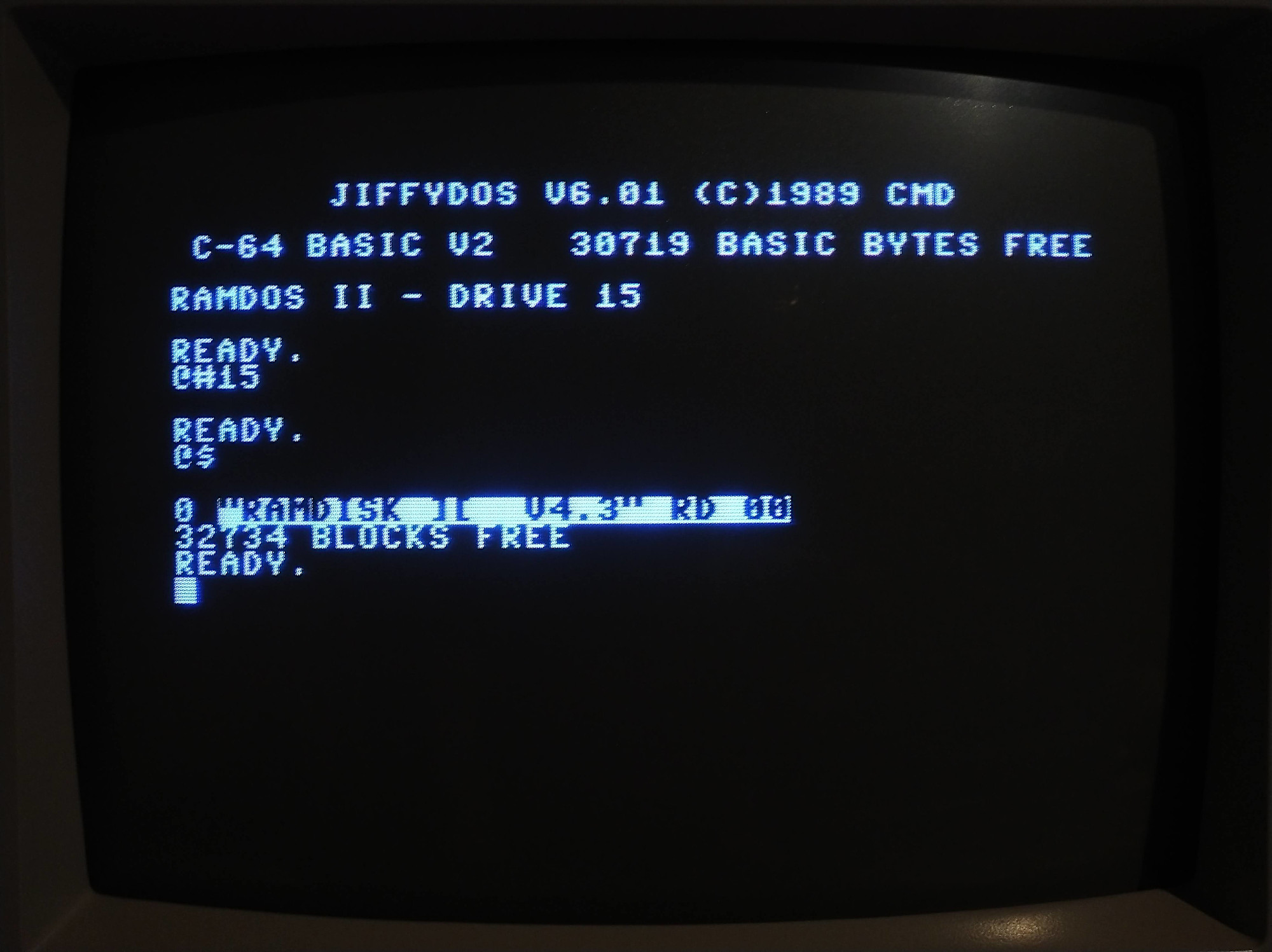 Running JiffyDOS with mass storage (SD2IEC/CMD-HD/Rear Admiral Thunderdrive), you can use the '=T' switch to get the short time stamped directory listing, which can be very handy when searching for files of a certain date (you can actually use additional switches to narrow down directory listings to only directories, program files, sequential files, relative files or even files before or after a certain time stamp or files of a particular name or containing certain letters - However such commands are beyond this simple demonstration). 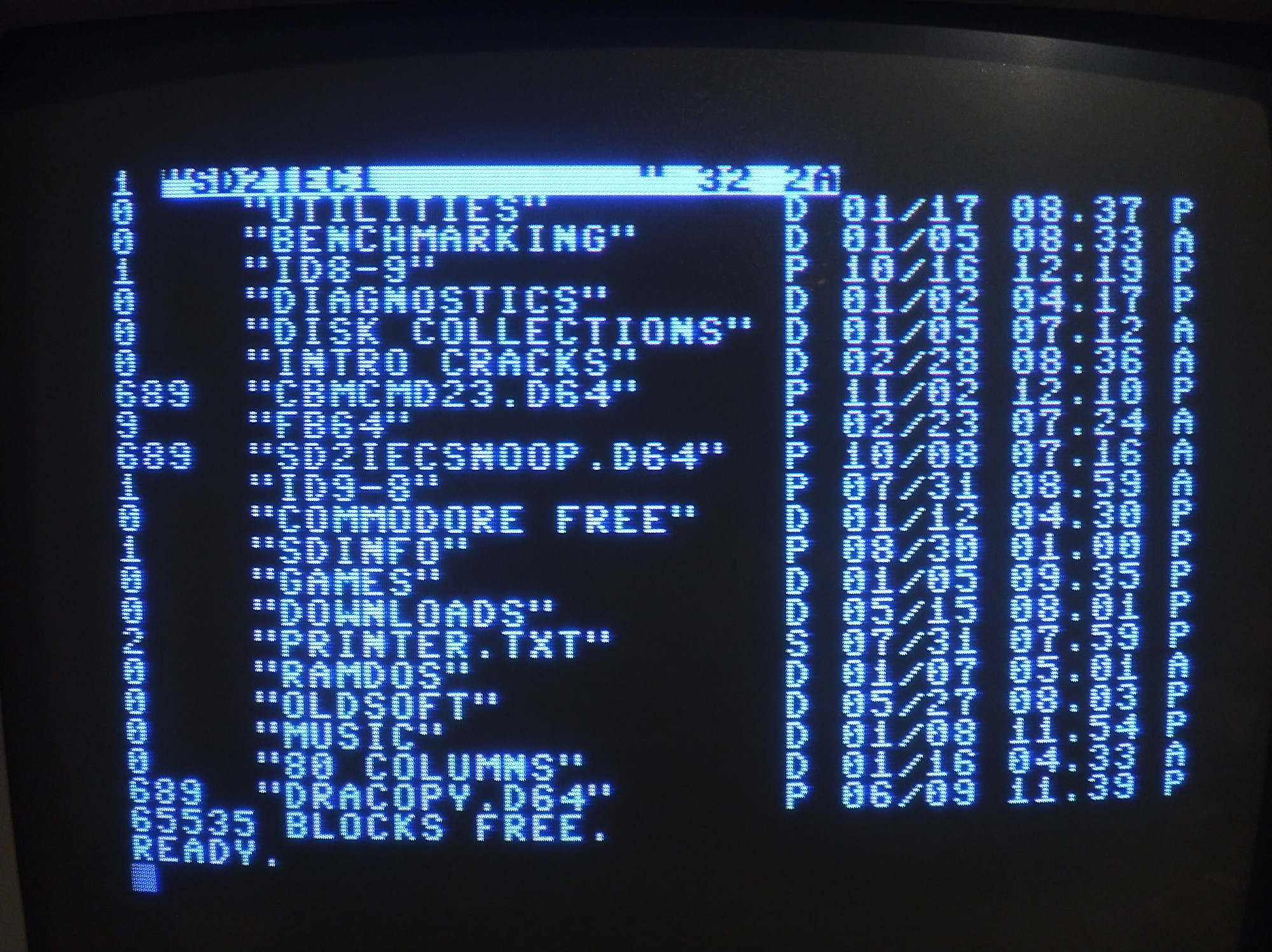 For example: You can make one small partition at the start of your mass storage drive containing one .PRG file, hold down 'SHIFT' and 'RUN/STOP' while powering on the C64 using JiffyDOS and the C64 will automatically boot the .PRG file in the first partition. This can be very handy regarding loader menu's. Furthermore, the auto boot feature works whether the mass storage drive is device 8, 9,10,11 - Basically JiffyDOS will boot the first .PRG file off the first mass storage device it sees connected to the machine and powered on.

SYS = a system partition (used by the firmware of the SD2IEC), NAT = A CMD native partition (on the SD2IEC this is a FAT32 partition).

Use the switch '=P' to get a partition listing. So the command would be: @$=P under JiffyDOS. 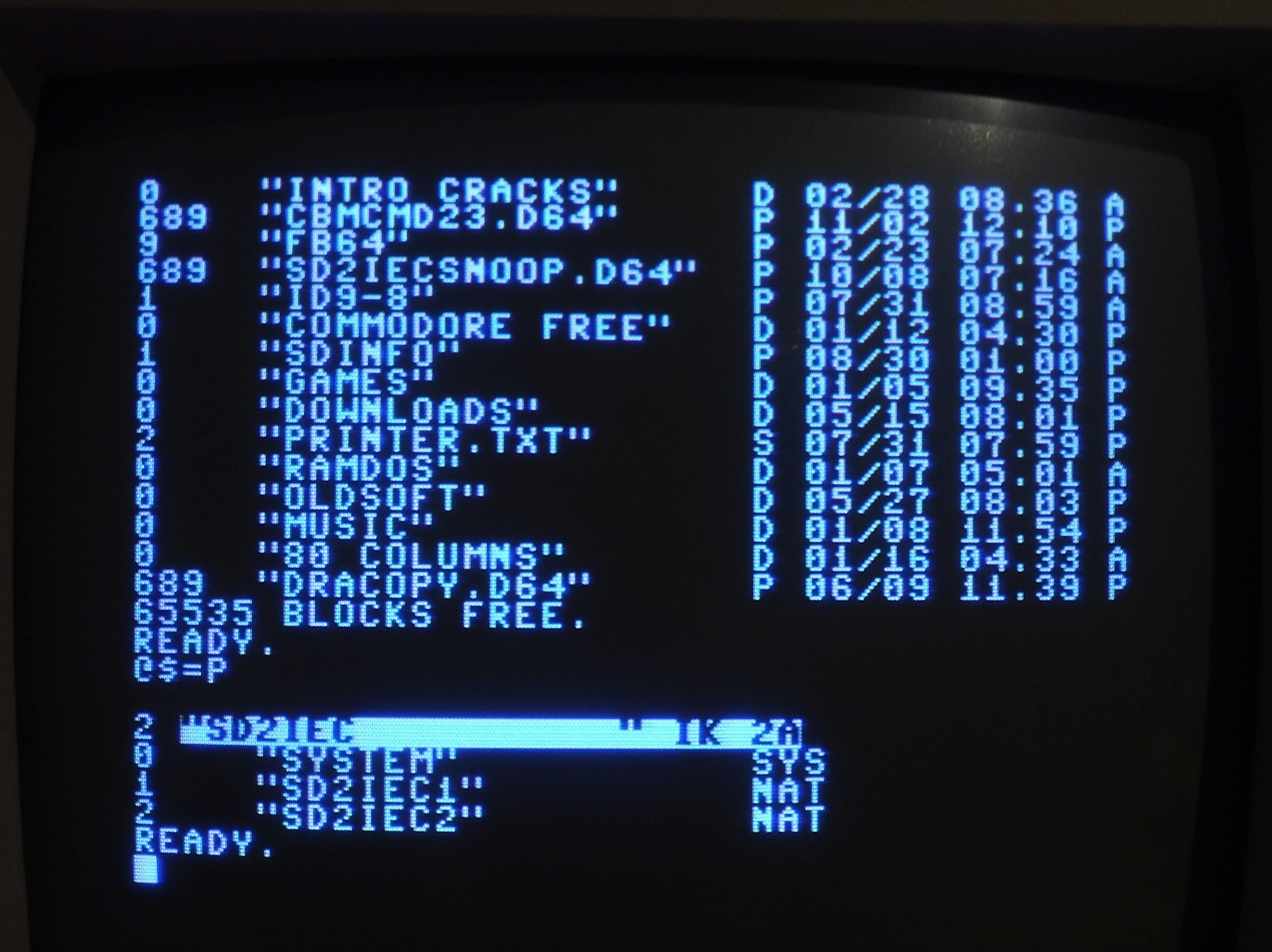 To change into another partition, use the command '@CP'. So to change into partition number two, you would enter @CP2 under JiffyDOS. You can also get a directory listing of various partitions while staying within your current partition and you can copy files between partitions. However, once again, that is beyond the scope of this demonstration. 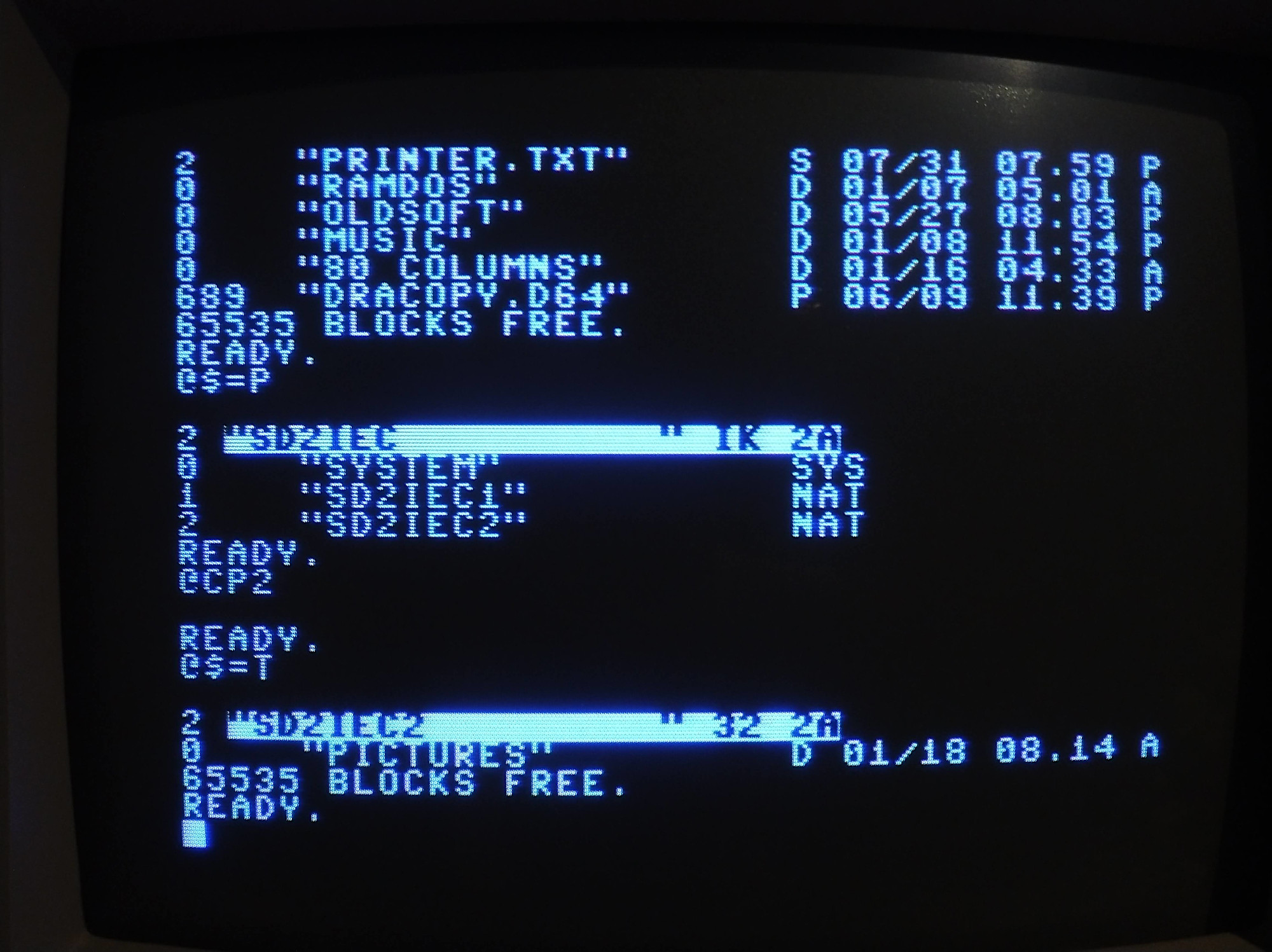 Screenshot number five. Navigating directories and mounting D64's or running a PRG file the long way (yes, it is possible).

By using forward slashes and colons, you can navigate to a particular directory and either mount a D64/D84 or run a .PRG file. String together a long command as follows. Remember, the colon has to go just before the destination directory/D64/D81 or PRG file. 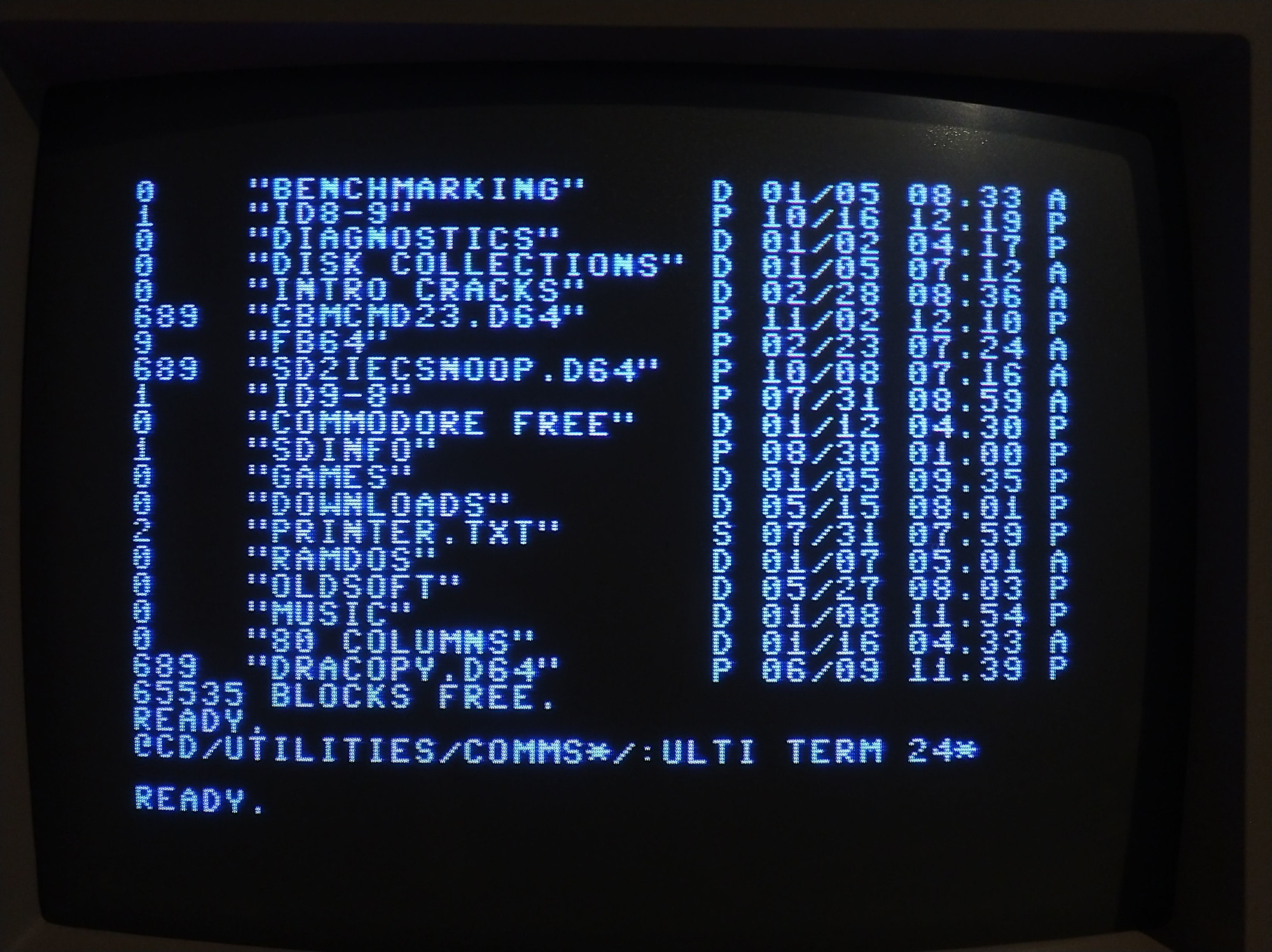 So following my command, I am mounting the D64 located in /utilities/communications software and the D64 is called ulti term 24.d64. As you can see the asterisk can be used as a wild card and directories can have spaces.

I hope this gives people an idea of just how powerful JiffyDOS can be, it really is a great disk operating system and brings out the best regarding our favorite 8bit machine. What's even more amazing is that it fits in an 8k ROM and unlike other competing 8bit machines running alternate disk operating systems remains basically 100% compatible with all Commodore software and software loaders.

See here for more reading (and there's much more to learn!):

And a cheat sheet. You can print this for reference.

Great writeup! I too have been exploring how it works and find the DOS wedge to be the most useful part about it (even more so than the fast load capabilities). It's so nice to not have to type BASIC commands to change drives, partitions, load stuff, etc.

Fabulous writeup! I have the JiffyDOS manual but seeing some of the most useful commands demoed here is a nice refresher. Thanks for posting this!

I admit, lately I've been dabbling in 8 bit Atari systems (emulated, Altirra is a really good emulator) and fiddling with SpartaDOS X with all the Atari users claiming that they have a better DOS than us Commodore users, and without making this an us vs them scenario as I believe we're all retro users, I thought "SpartaDOS is good, but it's really not any better than JiffyDOS when it comes to everything that matters. Plus it takes up a 128k bank switched ROM and is by no means fully compatible with all Atari software - Especially games".

I don't know how many here used BBC DOS (which was an excellent DOS), but JiffyDOS is similar in the way it uses the '@' to preceded DOS commands (BBS DOS used the '*'). I actually really like the short commands of JiffyDOS as I can remember them easily and I find it's actually a very easy DOS to learn as a result.

One thing I didn't mention is the function keys/shortcuts. All function keys are pre programmed with much needed commands and you can quickly and easily change drives using the [Ctrl] and [D] keys together. Furthermore, to load programs from a directory listing you just [CRSR] up to the desired program and press the up arrow (or % for certain machine code) and hit enter. Once again, a nice short command that makes perfect sense and is easy to remember: 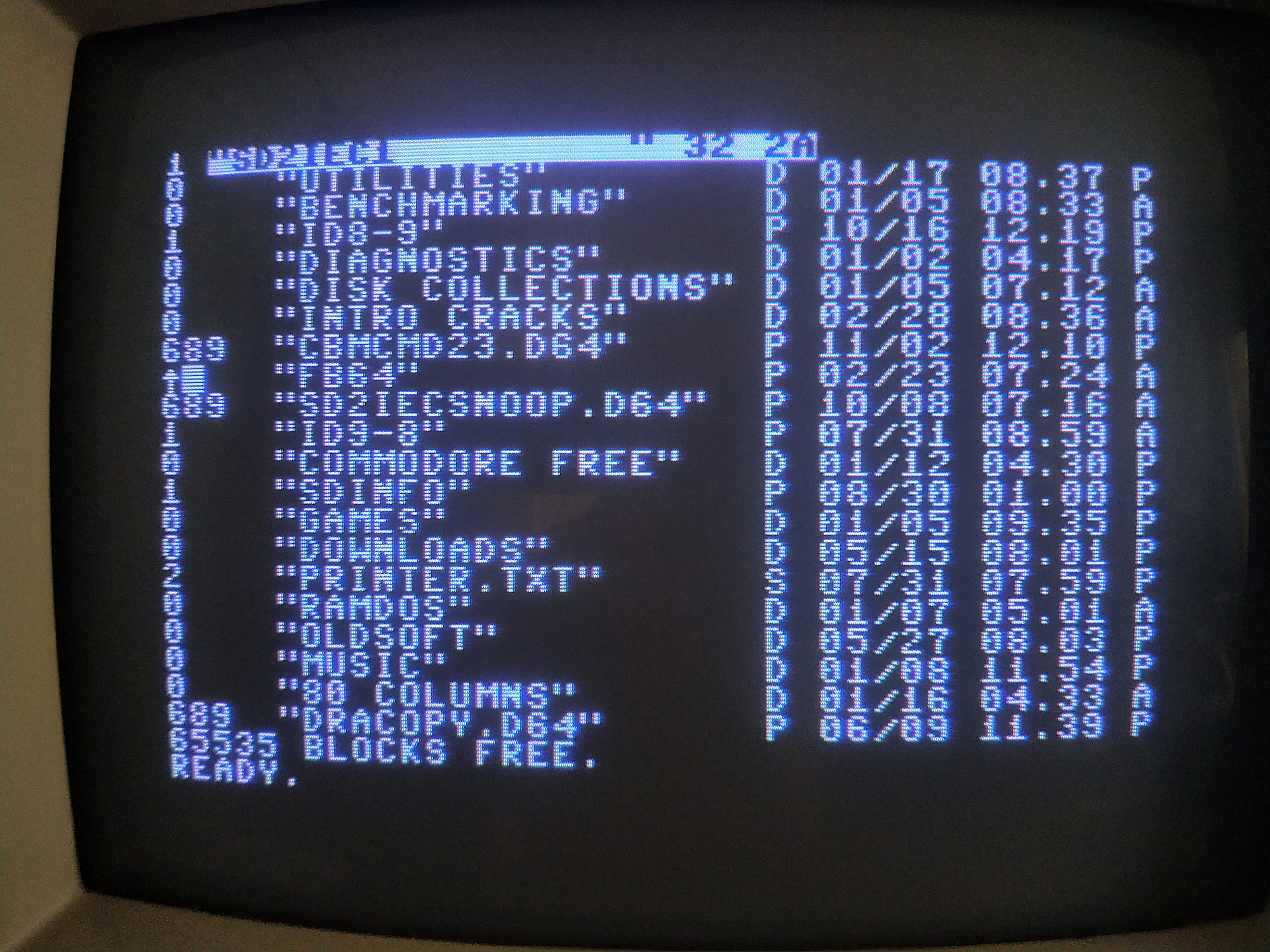 Love this, thank you. I would really love to set up a multi boot system where Jiffy dos is an option.

In the past, JiffyDOS was only offered as a replacement ROM option - You would have to physically swap the factory ROM's in your C64 and your FDD with the JiffyDOS ROM's.

These days, with the advent of devices like the 1541 Ultimate II+ and the Ultimate 64 you can swap ROM's at the press of a key and simply reset the computer - You don't even have to open the machine up anymore!

The Hyperload kernel is stupid fast in relation to loading times, but it's DOS implementation isn't as good at this stage - I have no doubt things will improve as Gideon improves the implementation. I find JiffyDOS loading times to be more than adequate, in fact they're quite impressive, especially off SD2IEC - So most of the time I just use JiffyDOS.

There's also Backbit, I think Intric8 did a review on that device and while not as featured as the UII+, it seems pretty good for the $$.

Recently I asked on Gideon's FB page if the newly implemented additional ram drive had a hardware ID so it could be accessed from JiffyDOS, I also asked if the software IEC 'Hyperspeed' mode could be implemented in JiffyDOS as the alternate kernel really isn't ideal with cumbersome commands that don't really confirm to the JiffyDOS implementation and the software IEC doesn't support the JiffyDOS protocol at this point in time.

And honestly, that's all I asked in a respectful manner.

One of the developers messaged me (I didn't message him, I don't even really know who he is) and he went on a right old rant - Accusing me of wanting things 'my way' and how he devotes his personal time to the project, blah, blah. At first I thought it was friendly discussion until the truth regarding his context dawned on me - In the end I had to block him. He just kept going on and on with no end to the accusations, I honestly couldn't believe the reaction over an honest and innocent question.